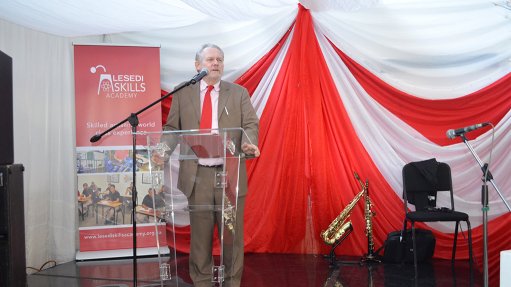 Skills development is critical to the economy and is non-negotiable, says Trade and Industry Minister Dr Rob Davies.

Speaking at the launch, on Tuesday, of the Lesedi Skills Development Academy, in Atlantis, in the Western Cape, he said the academy was established to address the need for skilled artisans and to close the skills gap in the nuclear and broader energy sector, as well as associated industries.

Davies noted that it was increasingly evident that, as a requirement to get any industrial job, one needed to have skills.

“At all levels of employment, one [needs] to be skilled. Government is aware that skills development in the past was limited to the minority and the majority of people had less access, yet it is a critical requirement now for the majority to get jobs.”

Davies added that this was why the department insisted on skills development every time it engages with business.

To further underpin the importance of skills development, President Cyril Ramaphosa last month launched the Youth Employment Service (Yes) programme, which is aimed at improving the grim employment outlook for young job seekers between the ages of 18 and 35 by offering paid work experience and, therefore, inclusion in the economy.

Davies indicated that business had, as part of the Yes programme, agreed to partner and create 300 000 internships a year for the unemployed youth for the next three years.

“Every bit counts as a means to address the issue of skills development and unemployment. We, therefore, can not compromise if we need more people to participate meaningfully in the economy,” said Davies.

The skills that the Lesedi academy develops will assist the people in Atlantis to tap into opportunities such as the proposed Atlantis Special Economic Zone, which is expected to be designated by the end of this year.

Engineering, procurement and construction company Lesedi Nuclear Services CEO Francis Carruthers said that, to date, the academy has been used for the sole requirement of Lesedi Nuclear Services and has employed 35 learners, who are at various stages of training within their respective programmes – 33 of these learners are from Atlantis.

The Lesedi academy was established to address challenges in providing skilled artisans with appropriate training and qualifications to execute projects. The learners engaged with apprenticeship, learnerships and short skills programmes.

The learners are then adequately equipped not only as skilled artisans, but are instilled with the highest levels of occupational health, safety and environmental skills; technical knowledge and skills; and human performance tools.