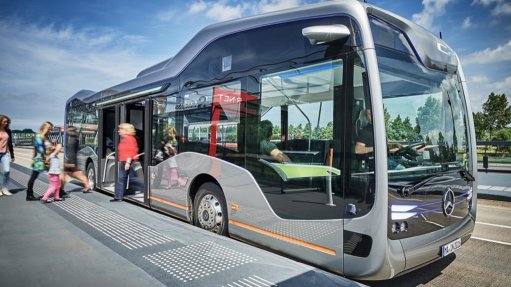 Daimler Buses on Monday announced that its Mercedes-Benz Future Bus with CityPilot had driven autonomously for the first time on a route of around 20 km in Amsterdam, on a section of the longest bus rapid transit (BRT) line in Europe, connecting Amsterdam’s Schiphol Airport with the city of Haarlem.

Daimler Buses says it is the world's first manufacturer to put a city bus into automated operation in a real-life traffic situation.

“We are now putting this technology into our city buses with CityPilot. The system is a further development of Highway Pilot, especially for big cities.

“It allows us to drive partially autonomously on specially marked bus lanes. This makes public transport safer, more efficient and more productive. More people can travel from A to B quickly, punctually and in comfort, to the benefit of all: bus operators, bus drivers and passengers.”

Daimler Buses head Hartmut Schick notes that Daimler will invest   around E200-million in the further development of its city-bus portfolio.

“The advantages of CityPilot for our customers are clear. Our Future Bus operates fuel efficiently and with minimal stress on the engine. That has a positive impact on operating and maintenance costs, vehicle lifetime and availability.”

Made for BRT
Research shows there are about 180 BRT systems in the world with a total fleet of around 40 000 buses, says Daimler. These systems convey some 30-million passengers every day.

The German manufacturer notes that BRT systems are perfect for autonomous driving, as they feature separate lanes, clearly defined schedules and identical procedures at bus stops.

The Future Bus recognises whether the route is suitable for automated driving and informs the driver accordingly.

The bus driver then presses a button and CityPilot is activated.

One condition is that the driver does not press the accelerator or brake pedal and does not steer, because any driver activity overrules CityPilot.

The driver is always in charge of driving and can take over at any time.

CityPilot comprises current assistance systems, those used in Mercedes-Benz coaches for example, as well as additional systems, some of which have been taken over from Daimler Trucks and further developed for urban traffic.

The equipment includes long- and short-range radar, a substantial number of cameras and a satellite-controlled GPS navigation system. The intelligent connectivity of the cameras and sensors allows a precise picture of the surroundings and the exact positioning of the bus, says Daimler.

Put into action, it means, for example, that CityPilot uses its camera system to recognise the traffic lights, stopping and driving off when required.

In addition, the vehicle communicates via Wi-Fi with the route infrastructure, receiving information on traffic-light status. This means that the bus can take advantage of a ‘green wave’ of traffic lights.

After leaving a built-up area, the bus accelerates to the allowed 70 km/h. The maximum speed is programmed, and even at this speed the driver does not steer.

The bus arrives at the bus stop in automated mode. It stops, opens and closes the doors, and drives away again.

Red lights ahead sees the bus brake independently, coming to a standstill. While the lights are changing, pedestrians are still crossing the road. The bus waits, lets them cross, and does not drive away until the road is clear.

The roughly 12-meter-long, low-floor Future Bus bus is divided into three areas. The service area is at the front near the driver; the express area for short journeys offers standing room in the middle; with the lounge area in the back for passengers who will spend more time on the vehicle.

An electronic ticket system dispenses with the conventional selling and checking of tickets by the driver.