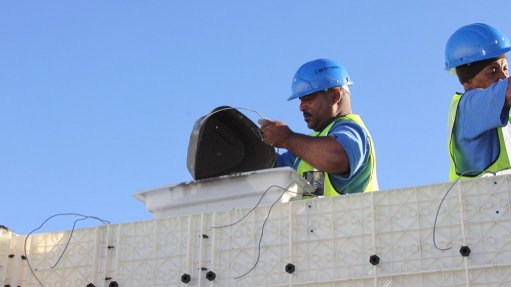 Housing and construction systems developer Moladi says its low-cost hous-ing system, comprising plastic formwork panels and a cement admixture, is widely embraced throughout Africa, as it has been specifically designed to meet the requirements of the African market.

Moladi founder and CEO Hennie Botes says the system alleviates challenges associated with conventional building methods, including excessive costs, labour-intensive processes and the availability of materials. He notes that, while the aforementioned challenges are not specific to African countries, they are exacerbated by other uniquely African obstacles.

Botes adds that the Moladi system works because it circumvents the lack of adequate infrastructure and funding, as well as the dearth of skilled labour prevalent in sub-Saharan Africa. “The system can be easily transported to virtually anywhere, including far-flung rural areas and informal settlements. The construction process does not require skilled labourers, heavy machinery or electricity, and the system uses building materials that are locally sourced.”

Further, a structure built using the Moladi system costs about 30% less to construct than a similar structure that uses conventional methods.

The system uses lightweight, reusable form-work to create a mould filled with aerated mortar – which has been approved by national standards authority South African Bureau of Standards and certified by national assessment body for nonstandardised construction materials Agrement South Africa – to form walls.

Typically, a cubic metre of Moladi’s mortar comprises 1 800 kg of local river sand, 250 kg of 42.5 N ordinary Portland cement, 5 ℓ of MoladiCHEM (a nontoxic water-based chemical mixture) and 200 ℓ of water. Botes states that admixture produces a mortar that “flows easily, is waterproof and has good thermal and sound-insulating properties”.

He says before the start of each project, the locally acquired aggregate undergoes testing at Moladi’s laboratory in Johannesburg. “This is to ensure that the aggregate is the correct size and quality for structural stability, and to determine the correct ratios of cement, sand, water and MoladiCHEM to produce the desired compressive strength.”

Botes mentions that the number of workers required depends on the size of the housing pro- ject, but that between four and ten workers are typically required to construct a 45 m2 hous-ing unit.

Unskilled workers from the area can be trained on site by a Moladi foreman over a two-week period. The process of erecting the first house forms part of the training programme. While there is no additional cost for training, arrangements for the foreman’s travel, food and accommodation have to be made and/or paid for by the client.

The client, whether a rural community, local contractor or nonprofit organisation (NPO), is supplied with a working document and assembly instructions, including the guidelines and recommended mix design for the mortar.

Botes says “it is essentially up to the client to ensure adherence to our guidelines. However, as a quality assurance measure, Moladi requires consistent strength testing of the mortar mixes from an independent laboratory”. Moreover, a certified structural engineer has to approve the design, reinforcing schedule and housing units before they can be occupied.

Construction Process Botes explains that the housing units are erected on a floating raft foundation. The formwork panels comprise interlocking components that join to form wall configurations of any length or height, but with a thickness of 150 mm for external walls and 100 mm for internal, nonload-bearing walls.

The internal panels are erected first, with the steel reinforcing, window and door block-outs positioned within the wall cavity. The external panels are then erected to seal off the wall cavity prior to it being filled with the mortar mix. For a relatively small structure (between 45 m2 and 74 m2), this phase takes a four-person team about six hours to complete.

The mortar sets overnight or after 12 hours in good conditions. “The setting time will not be affected if the temperature remains at 20 °C. Should the temperature be cooler than 20 °C, the mortar would take proportionally longer to set. Significantly, the effects of rain are allayed as the mortar is securely placed and covered by the formwork limiting any unwanted exposure.”

Once the mortar has set, the panels are removed, and the various sections can be transferred and reused for another housing unit on the same site. The first unit’s walls are painted using cementitious water-based paint; the roof, windows, doors and finishings, such as lighting and sanitary ware, are installed. This phase takes about ten hours.

The system is ideally suited to large-scale, low-cost housing projects. Botes says Moladi has not participated in the Reconstruction and Development Programme housing project because “it is a question of finding the right, reputable contractor and developer to work with”. He believes that finding a reliable partner will ensure that Moladi is not associated with any of the negativity that the programme has been associated with, specifically, reports of substandard houses.

The company has, however, been involved in numerous projects with NPOs and nongovern-mental organisations for similar community-based low-income housing initiatives.