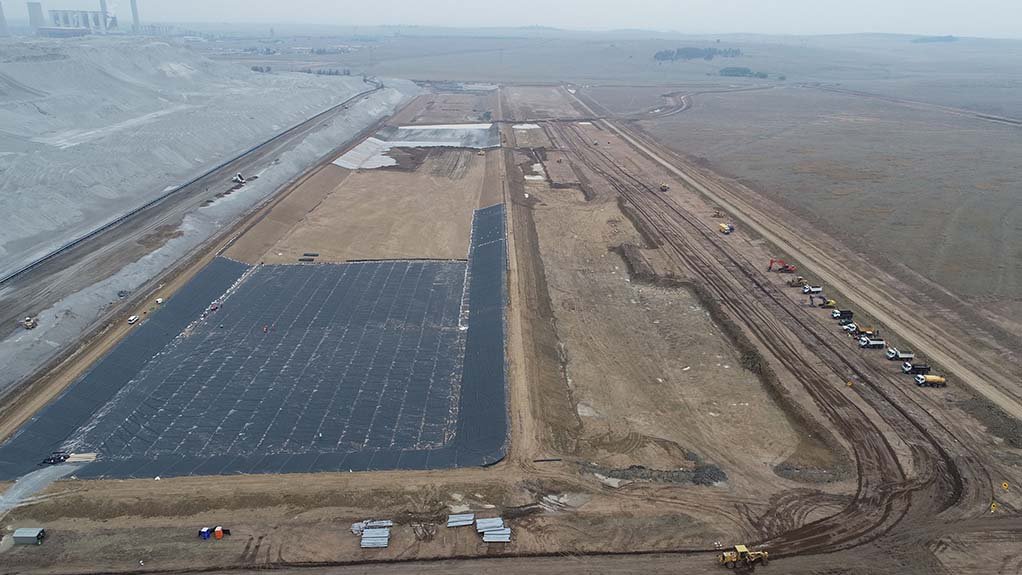 The area 2 terraces with bulk earthworks, layerworks and HDPE liner installation in progress

Leading black-owned contractor Concor is over halfway with extending the continuous ash disposal facility (ADF) at Eskom’s Majuba power station near Amersfoort in Mpumalanga. This project will ensure that Majuba can continue generating electricity while complying with ever-stricter environmental regulations regarding the responsible storage of waste.

According to Mabandla Dlamini, contracts director at Concor, the extended ADF will accommodate ongoing ash generation at the power station until February 2036. The project is being conducted in a fully-integrated joint venture with Midrand-based contractor Lubocon Civils, with an 85%:15% split with Concor holding the major percentage.

To date, Concor has handed over Terrace 2A and is in the process of handing over one of the two rehabilitation dams, says Dlamini. The construction of the extensive terraces – which measure 1.2 km long by 175 metres wide – began with bulk earthworks, cutting down to a design level before constructing the various layers.

These layers include 100 mm of filter sand, followed by a Class 2 geomembrane and two 150 mm layers of clay. This is covered by a double-textured 1.5 mm HDPE geomembrane, followed by a 300 mm coarse ash layer. Each liner terrace, constructed from stabilised ash, is broken down into compartments of 5 metre widths, located every 100 metres.

“Underneath these layers, we are constructing a network of herringbone subsoil drains with a leachate collection system which will flow into a pollution control dam,” Dlamini says. “This will drain into Pollution Control Dam 5.”

Specialist sub-contractors have been used for the all-important lining beneath the dams, as well as the identification of any potential leaks in this lining.

“The excavation and bulk earthworks for the pollution control and rehabilitation dams is followed by the construction of a subsoil drainage layer,” he says. “In addition to the geomembranes and layers of filter sand and impermeable clay, this layering includes 250 mm thick geocells, a ballast layer comprising 300 mm thick cement-stabilised sand (8% by mass) and geocells.”

The rehabilitation dams also have penstocks and valve chambers. Enhancing the environmental controls are water perimeter canals around the whole facility to separate and channel clean and dirty water. These are lined with 100 mm geocells filled with 30 MPa concrete, controlling the stormwater in the area.

“The canals play a vital role in reducing the risk of any washdown from the tailings facility,” he says. “Measuring up to 7 metres in width, the total combined length of these canals will amount to more than 4 km.”

Some 1,400,000 m3 of earth is being excavated during the project, while the linings include 860,000 m2 of double-textured 1.5 mm high-density polyethylene (HDPE) liner. The stabilised ash layer will require 130,000 m3 of ash sourced from the power station and screened to prescribed specifications before being mixed with stabilising cement.

For the concrete work – which will include structural concrete for silt traps, spillways, drains and culverts bases – a total volume of 14,000 m3 of concrete will be used. Some 7,700 tonnes of cement will be delivered in bulk, to be stored in Concor’s on-site silos at its batch plant.

Site agent, Muhammad Asmal says that at project peak there will be almost 90 items of earthmoving equipment on the site. This will include 40-tonne articulated dump trucks, 70-tonne tracked excavators, tipper trucks, pug mills, screening equipment, graders and compaction equipment.

“There are 43 subcontractors and suppliers engaged in the project,” Asmal says, “with over 440 personnel employed on site – 285 of them from local areas.”

The Concor-Lubocon JV is also constructing 5.5 km of internal or monitoring road, with G5 and G7 layers from commercial sources in Newcastle and Ermelo respectively.

“As part of Eskom’s commitment to supplier development and localisation, a Supplier Development Plan was developed in conjunction with the Concor Lubocon JV to facilitate the inclusion of SMEs and QSEs from various towns surrounding the Majuba power station,” Nielesh Maistry, Eskom projects manager, says. “This included areas in the Gert Sibanda Municipality. “

SD&L manager, Nkateko Rasimphi highlights that the Concor Lubocon JV takes a proactive role in the training and induction of small and medium-sized enterprises (SME), especially with regard to issues such as legal liability, hazard identification and risk assessment.

“We have identified local technicians who we will help to develop, with the objective of training them and putting them on the road to professional registration,” he says. “The JV also runs a corporate social investment programme with local communities, focused on educational infrastructure in previously disadvantaged schools.”

Complying with strict environmental regulations means ongoing monitoring on site, according to Portia Rasakana, Lubocon’s environmental manager at the Majuba project. She highlights waste management as a key focus to avoid any environmental impact, but concerns such as pollution and dust management also receive constant attention.

“It is crucial that all our employees and subcontractors are conversant with the conditions of our Environmental Management Programme and our Water Use Licence,” says Rasakana. “This means building awareness among all our partners, and following up with strict enforcement.”

She notes that alien vegetation is also a concern, especially in areas where ground is disturbed. Management plans are in place for all environmental issues including waste, water and hazardous materials, she says.