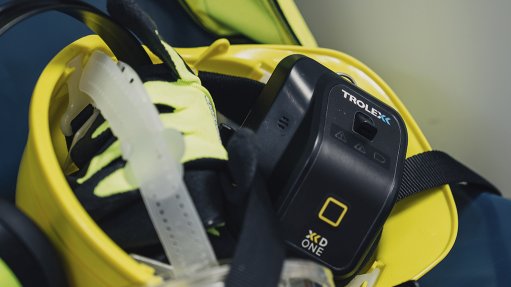 FLASHING LIGHTS The monitor will start to flash and beep when particulates reach a dangerous level and an area needs to be evacuated.

Safety equipment supplier Trolex released its new XD One wearable, self-contained personal dust-monitoring device to the market in the second quarter of 2021.

The technology used in the XD One ensures that the monitor delivers continuous, real-time detection of harmful particulates often present in harsh conditions to protect people.

Trolex has worked on developing its particulates portfolio of products for about seven years owing to the number of health risk cases of dust in the mining and construction sectors reported in the UK and globally.

Trolex will offer a silica-specific version of the monitor, a bigger unit that can be mounted to a wall instead of being carried on the body.

“The monitors are fourth-generation (4G) enabled; all the information is streamed to the cloud and can be accessed anywhere in the world.

They are not that much bigger than a mobile phone, and maintenance routines take five seconds by pressing a button,” says Trolex CEO Glyn Pierce Jones.

He adds that the new technology informs people working in a specific environment about the amount of particulates in that area in real-time – the monitor will tell them during their shift whether they have reached the legal limit of particulate exposure and need to leave the area.

Further, the monitor will give a strong audio and visual alarm when particulates reach a dangerous level, and an area needs to be evacuated. It also calculates the amount of particulates a person has been exposed to during a shift.

“Companies cannot make excuses anymore about not being able to protect their employees because the new technology meets legislation requirements,” notes Jones.

He highlights that the manufacturing of the monitors takes a few weeks, but the company hopes to improve the turnaround time for the monitors to within a few days.

“If demand increases, we hope to have these in stock, which would mean that we could deliver the monitors to customers and distribution partners overnight. Via our global network of authorised distributors, the idea would be eventually to have the monitors readily available to the market,” he says.

Jones adds that owing to Trolex being active in the environmental monitoring and gas detection industry, it started to consider dust monitoring a possible health and safety measure in various environments.

“Trolex will also start a project on diesel particulate monitoring, which will be of interest to the mining industry,” Jones concludes.