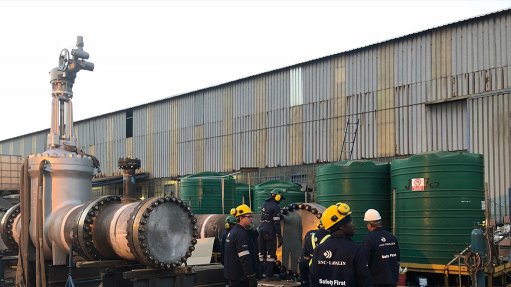 The company was awarded the project in May of this year and the purpose of the project is to extend the life span of the steam system on the Sasol refinery, in Secunda, in Mpumalanga, says SNC-Lavalin sub-Saharan Africa GM Stuart Kent.

He adds that the steam system is the main steam header that links the steam generation plant to the rest of the factory and can be considered as the main artery of the refinery.

To extend the life of the main artery complex, works included the removal and installation of the high-pressure steam isolation valves and associated piping on the West factory. It consisted of the management, prefabrication, construction (removal and installation), quality inspection and testing of the valves and associated piping, as well as the handover documentation to allow for start-up, Kent explains.

Some key metrics of the scope of work included 164 t of old piping that was cut out and removed from site and 279 t of new piping which was prefabricated at SNC-Lavalin’s fabrication facility in Chamdor, near Krugersdorp. The new piping was transported to Secunda and installed on site; the on-site installation window was about four weeks, Kent notes.

He highlights that about 3 000 people were employed from the local community, of whom 416 were employed to work on the 40 bar steam project.

SNC-Lavalin has a world-class approach to safety systems and processes and this project was no exception, Kent states. “It is a momentous achievement to have completed the entire shutdown campaign without an injury. We are extremely proud of this achievement, safety is continuously at the core of our culture,” he enthuses.

Meanwhile, SNC-Lavalin has been supporting Sasol’s flagship refinery in Secunda since the early 1990s. The company is currently in the second year of a five-year shutdown management and execution services agreement at the Sasol crude oil refinery, Natref.

SNC-Lavalin strives to be the premier engineering solutions partner, committed to delivering projects from vision to reality for a sustainable life span, adds Kent. “The steam project builds on this vision, as it serves to sustain and enhance our client’s facilities and ensures a continued contribution to South Africa’s energy mix for the foreseeable future.”

He notes that SNC-Lavalin Africa has a diverse portfolio of projects, servicing clients from many sectors. These projects include recent awards in the renewables market in South Africa, mining and metallurgy projects in Mozambique and full EPC projects in the oil and gas sector.

“SNC-Lavalin can tailor a service that is aligned with client needs, and with an experienced team of motivated staff, we will continue to deliver complex projects to world-class standards,” Kent concludes.