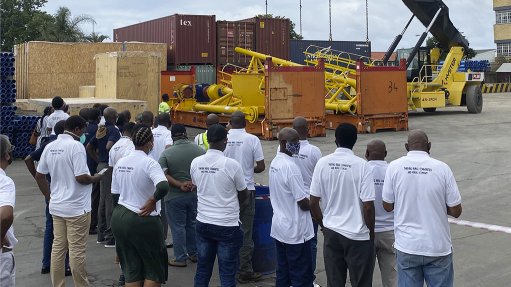 Project engineering, construction and operations management group Bosch Holdings was appointed as the consulting engineer for the design and project management of a new cane transloading station in Mkuze, after the completion of a feasibility study.

The new facility will assist small-scale sugarcane farmers in the Makhathini region, on the north coast of KwaZulu-Natal.

The new rail-side facility incorporates the design and installation of advanced equipment, including a new spiller, that is capable of offloading road vehicles at a rate of over 300 t/h, over a 24-hour period.

“A decommissioned spiller was sourced by Bosch Projects, in collaboration with Bosch Trading, a subsidiary of Bosch Engenharia of Brazil. After dismantling and a total refurbishment back to brand-new condition by the Bosch Engenharia team, the spiller was shipped to Durban, where it arrived safely in record time, which reduces the project timelines by six months,” says Bosch Holdings business development director Bill Yeo.

The spiller design has been upgraded by Bosch Engenharia engineers to have a pull-out force of 50 t, and the hooking bar has been modified to accommodate the dimensions of South African vehicles. Other modifications include conversion to a frequency of 50 Hz and a robust control system that is suitable for harsh outdoor agricultural conditions.

“The Bosch Holdings team is proud to be part of this uplifting Mkuze initiative that will benefit nearly 2 000 small-scale sugarcane farmers in Makhathini, by significantly improving throughput efficiency for the transportation of cane to the Felixton mill by rail, rather than road. From the beginning of the upcoming sugar season, cane grown in the Makhathini region will be transported by road to the new transloading facility at Mkuze and transferred by the spiller, from road trucks to rail wagons, for transportation to sugar producer Tongaat Hulett’s Felixton mill – a distance of about 350 km.”

He adds that this new facility will also assist sugarcane farmers in neighbouring areas who can soon transport their cane by rail from the Mkuze rail siding to sugar producers Umfolozi and Pongola’s sugar mills.