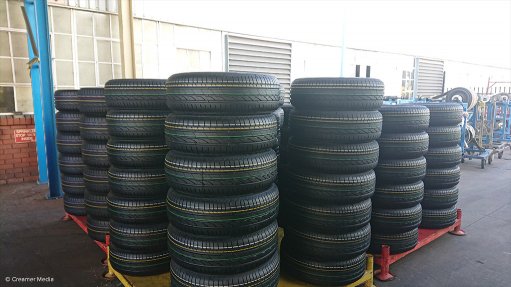 Tyre manufacturer Bridgestone South Africa on Wednesday hosted a media tour of its 186 027 m2 manufacturing facility in Brits, North West, to showcase how its technology has evolved from the 1950s to date.

The Brits plant is one of six globally in the Bridgestone group to manufacture run flat tyres, which is tyre technology that allows a vehicle to keep driving for 80 km at 80 km/h even when air loss or a puncture is detected, eliminating the need to stop and change a tyre, while contributing to saving materials since spare tyres are not necessary.

When a run-flat tyre is punctured, it loses air, but it continues to support the vehicle’s weight using the reinforced sidewalls.

Bridgestone also has eight retread factories across the country and in Namibia where truck and bus radial casings can be retread.

In line with facility renewals and upgrades, Bridgestone recently started implementing the integrated work system (IWS) methodology in its factory, where a bottom-up management process is used, whereby employees take charge as equipment decision-makers, rather than executives who do not encounter the machinery as often, if at all.

The Brits plant manufacturing process encompasses a raw materials section where natural rubber or synthetic rubber, as well as additives such as carbon black, are stored. This is followed by compound mixing of the raw materials, and then extrusion.

For the compound mixing process, Bridgestone is in the process of upgrading to Variable Intermesh Clearance Mixing technology, which offers better heat distribution and enables low rolling resistance, while saving energy and delivering a higher-quality compound.

“The strength of the intermeshing design is in its ability to move materials aggressively within the mixing chamber, effectively shearing the mix, and owing to its surface area-to-volume ratio design characteristics, an enhanced ability to remove heat generated during the mixing process is achieved,” explained Bridgestone South Africa operations GM Barry Nigrini.

He noted that Bridgestone South Africa is busy preparing the Brits plant to bring in new steel calendaring technology, which will cut steel wires even thinner than with existing technology. These machines will be operational by 2020.

The steel within the tyre offers extra resistance and resilience, which is more often used in truck and bus tyres than passenger tyres. For fabric calendaring, the company prefers using polyester and rayon fabrics.

For quality checking and inspection, the plant uses X-ray machines to check the inside of the tyre for any defects.