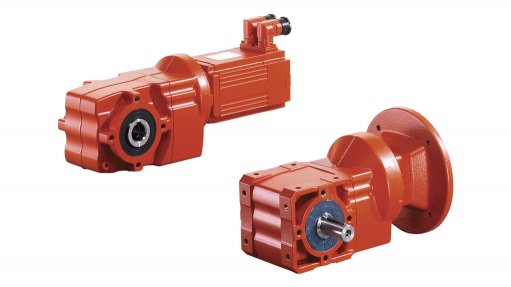 SEW Eurodrive sales engineer Nick McKey says the company’s helical-bevel K 9-series is between 95% and 97% energy efficient. This is a major improvement on the worm gearbox, which is an alternative gearbox design. The worm gearbox ranges between 40% and 90% energy efficiency, depending on various factors, he adds.

McKey notes that, although the units are not new to the original-equipment manufacturer as an international company, they are relatively new to the South African market. He explains that SEW-Eurodrive South Africa is planning to establish a local assembly line to assemble the gearboxes. This will enable the company to provide direct after-sales support “within 24 hours” for the helical-bevel K 9-series, if there is a breakdown at a client’s facility. Local assembly will also allow for delivery to customers within three to five days.

SEW-Eurodrive regional sales manager Clive O’Reilly adds that the K 9-series is becoming increasingly popular in the food and beverage industry, with the company having recently supplied the equipment to a newly built bakery plant in Port Elizabeth.

He says SEW-Eurodrive is “well on its way” to supplying more companies in the food and beverage industry with various drive technologies, such as frequency inverters. Frequency inverters are connected to the electrical motor of a gearbox and, by using the hertz, the output speed of the gearbox can be manipulated.

This is useful in the food industry for speed-sensitive applications to ensure optimal product quality. For example, when products are placed on an oven conveyer, the belt’s speed must be regulated. Should the conveyer belt move too slowly when baking bread, the bread will burn; should the belt move too fast, the dough will be underbaked, O’Reilly explains.

McKey concludes that manufacturers in the food and beverage industry choose K 9-series gearboxes because they have fewer breakdowns and defects, combined with maximum operating efficiency.