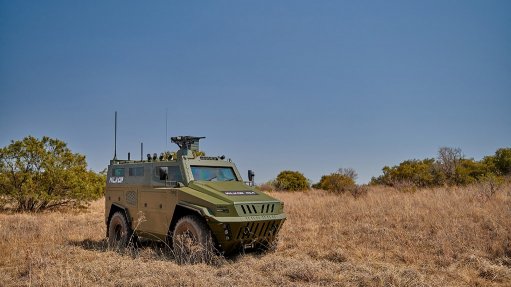 Milkor officially unveiled the APC at the Africa Aerospace and Defence (AAD) 2018 international defence exhibition held in Centurion in September of last year. The company states that the armoured transport vehicle configuration of the Milkor 4 × 4 was displayed at the exhibition.

Production of the vehicle started in 2018 and Milkor received the first order from an undisclosed customer during the AAD 2018 event.

The company reveals that the Milkor 4 × 4 is designed to meet the infantry carrier requirements of armed forces on the African continent. The Milkor 4 × 4 APC is used for troop transportation, casualty evacuation and riot control missions. It can also be deployed by police forces, law enforcement agencies, security forces and militaries across the world.

The vehicle is based on a reinforced commercial chassis, integrating a 4 × 4 wheel drive configuration. It encompasses a conventional vehicle layout with the engine stationed in the front, crew section in the middle and a troop compartment in the rear.

The monocoque hull structure of the vehicle offers a high degree of stability, flexibility, and strength required during key missions. It also enhances the reliability and operational efficiency of the vehicle. The maximum speed attained by the vehicle is 110 km/h, while the maximum range is 1 000 km.

Its hull is divided into two sections: a front crew compartment and a rear extension that offers seating arrangement to dismounted troops. It is fitted with a large windshield at the front and three windows on either side. Its large monobloc windshield enhances the situational awareness of the crew. The vehicle features a single hydraulic ramp at the rear, enabling the entry and exit of troops and crew.

Milkor 4 × 4 APC is manned by a crew of two including a driver and a chief commander. The spacious cabin offers seating to accommodate eight infantry personnel. Its modular layout enables conversion of the base vehicle to multiple mission configurations such as command, ambulance and police.

The APC has a gross vehicle weight of 15 t when fully loaded, whereas its tare mass, or empty weight, is 9.5 t. It uses commercial components for key systems, which enables easy upgrade and maintenance by the operators.

It offers Level B7 ballistic and mine protection to the on-board crew and infantry troops. It protects the occupants against ballistic threats, small arms, shell splinters, fragmentation warheads, and mine explosives.

The protection level of the vehicle can be further enhanced with the installation of appliqué armour plates on the windows and windshield.

The armoured vehicle is powered by an Iveco turbo diesel engine, which has a maximum power output of 176 kW. The large tyres fitted on the chassis offer smooth manoeuvrability when travelling through rough terrains and harsh weather conditions. The vehicle lacks amphibious capabilities, but its high ground clearance enables fording shallow water obstacles.