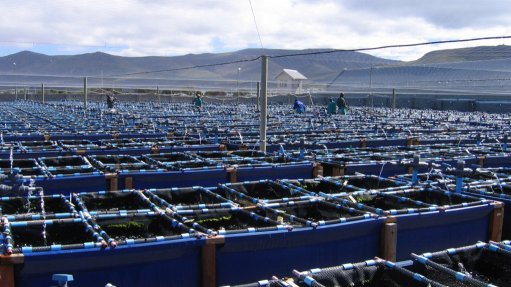 While abalone contributes just a part of the aquaculture sector – the fastest growing food-producing sector in the world – it remains one of the most sought-after invertebrates, especially in the East, which makes it key for the development of South Africa’s oceans economy.

“When it comes to aquaculture, abalone production in South Africa has the biggest potential for growth in value and job creation,” said Rhodes University professor of Ichthyology and Fisheries Science Peter Britz during a Trade and Industrial Policy Strategies presentation on aquaculture, held on Wednesday.

He noted that South Africa ranked fourth globally when it came to the export of abalone, which was currently priced at $35/kg, adding that the country exported most of its abalone product to China, Taiwan, Singapore and Vietnam.

Britz said that, while other sub-sectors that comprise aquaculture, such as trout farming, could be expanded in some of the major State dams, the country’s supply of cold, clean water required for trout farming was limited.

He pointed out, however, that the South African market demand for trout was big, importing 5 000 t of trout and salmon a year.

He also noted that mussel and oyster farming, which largely took place in Saldhanna Bay, was set to grow through support from government’s Operation Phakisa initiative, which was helping to establish partnerships between small farmers and commercial firms.

Nevertheless, Britz reiterated that abalone farming remained the biggest potential for growth in the medium term owing to its market value.

He noted that abalone farming generated one job per ton of abalone created and capital had already been invested in the industry, which would double production from 2 000 t of abalone to 4 000 t of abalone over the next four to five years.

“That’s another 2 000 jobs that are certain with [this] shore-based aquaculture,” he said.

Britz further highlighted the development potential of abalone ranching – the seeding of hatchery-reared abalone into the ocean – to rehabilitate areas that had been subject to poaching and overfishing. Pilot abalone ranching projects were under way on the east and west coasts, which were in the process of being commercialised.

He explained that ranching permitted an incentivise for rights holders to invest in reseeding and protect their investment from poaching. As such, this was a potential solution for abalone poaching.

“If we were able to sustainably produce 1 200 t of abalone a year through ranching, that would equate to 1 200 jobs and R1-billion generated by the industry,” he said, reiterating that if the country was able to maintain its abalone market niche and price through branding and promotion, there was potentially a lot of scope for adding value.

Meanwhile, other than poaching, significant challenges facing the abalone industry included the cost of energy.

“Water is pumped to shore in large volumes for abalone farming and the abalone prices are flat, while electricity prices are increasing beyond inflation, squeezing margins. We are [therefore] looking at ways [to improve] costs,” he said.

He added that abalone farmers would need to look at alternative models such as shortening their four-year shore-based growout period and consider planting abalone out to sea, where they could feed on themselves.

“This could potentially uncouple abalone farm costs from the cost of electricity. The main costs would then be labour in the form of diving, harvesting and guarding the abalone,” he said.

GLOBAL DEMAND
While there had been massive growth in abalone production in China and Korea, this was levelling off as the traditional live market was saturated, said Britz.

He further noted that diversification into value-added products such as food, gifts and nutraceuticals for local markets led to increased consumption.

Britz noted that the Singapore abalone market continued to be dominated by canned products.

Importers believed, however, that this was changing, with other product formats gradually becoming more popular – particularly with the younger generation seeking more ready-to-eat options.

South African abalone was thought to be the best quality when it came to taste and texture and Singapore consumers were willing to pay a premium price for it.

“The South African industry has invested a lot of money on collective industry promotion in Singapore, with significant investment in supply-chain education, familiarisation tours, consumer advertising and in-store promotional campaigns,” he said.

Looking forward, Britz said that expanding the international market base beyond Hong Kong, Singapore and Taipei would help grow the local abalone export market, and that it was important for South Africa to build a premium brand based on quality.

He concluded that product innovation and a viable partnership between government, community and the abalone industry would assist in growing the sector further in South Africa.