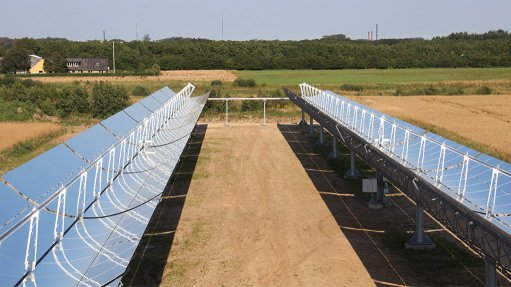 Company Announcement - Aalborg CSP, leading developer and supplier of innovative renewable energy technologies, has been selected to design and deliver a concentrated solar power system to be integrated with a biomass-fueled organic rankine cycle plant for combined heat and power generation in Denmark. This will be the first large-scale system in the world to demonstrate how CSP with an integrated energy system design can optimize efficiency of ORC even in areas with less sunshine.

Aalborg CSP in close collaboration with the Danish district heating plant (Brønderslev Forsyning) has carried out a comprehensive feasibility study on the potential to use concentrated solar power as an add-on to the biomass-ORC plant. Based on the positive findings, Aalborg CSP has been awarded the contract to develop and supply the 16.6 MWt CSP plant enabling production of heat and electricity within one carbon-free system.

The CSP plant will consist of 40 rows of 125m parabolic trough loops with an aperture area of 26,929m2. The parabolic troughs will collect the sunrays and reflect them onto a receiver pipe wherein a fluid is heated up to 330°C. This high temperature is able to drive an electric turbine to produce electricity, but the flexibility of the system also allows production of lower temperatures for district heating purposes. To maximize yield of energy, the waste heat will be utilized and sent to the district heating circuit whereas electrical power will be generated at peak price periods.

Aalborg CSP paves the way for CSP in northern Europe

Despite known to be a technology typically used in sunny desert areas, CSP also has potential in the European climate when integrated with other technologies. Markets with well established district heating infrastructure or an existing base of ORC plants - such as Germany, Austria and Italy - can leverage the flexibility of CSP for combined heat and power generation. While the prices of different types of fuel fluctuate, concentrated solar energy proves to be a stable and efficient renewable alternative in Europe.