By: Simone Liedtke     11th August 2020 While there are talks of mobilising more investment to kickstart the South African economy post-Covid-19, Business Leadership South Africa (BLSA) CEO Busi Mavuso laments that current developments are showing the opposite, as projects and investments have either been cancelled or delayed. In her... →

By: Natasha Odendaal     6th August 2020 Telecommunications giant MTN is planning to exit its Middle East markets over the medium term as it turns its focus solely to its African markets. The group’s renewed focus on the future of its pan-African strategy forms part of its ongoing portfolio review programme. →

By: Natasha Odendaal     6th August 2020 Academia, private sector and civil society have signed an Expression of Interest (EoI) aimed at bringing together experts to lead the development of artificial intelligence (AI) in South Africa and establish an internationally aligned AI institute. Inked during the virtual AI Dialogue South... →

By: Natasha Odendaal     5th August 2020 Communications solutions provider Liquid Telecom South Africa has rebranded to Liquid Intelligent Technologies in a strategic repositioning to advance South Africa’s digital future. In 2018, the group embarked on a journey to adapt its operating model as it started the transition towards becoming... →

By: Reuters     4th August 2020 Blue Label Telecoms said on Tuesday that Cell C, in which it is the largest shareholder, had defaulted on the payment of capital on its $184-million note, which was due on Aug. 2. Cell C, a mobile carrier, also defaulted on interest and capital repayments related to the respective bilateral loan... →

By: Natasha Odendaal     31st July 2020 Telecommunications group MTN said on Friday that its succession process for group CEO was on track and that it would make an announcement in the next four to eight weeks. This comes as outgoing CEO Rob Shuter has been appointed CEO UK-based telecoms firm BT Group's Enterprise division. His... → 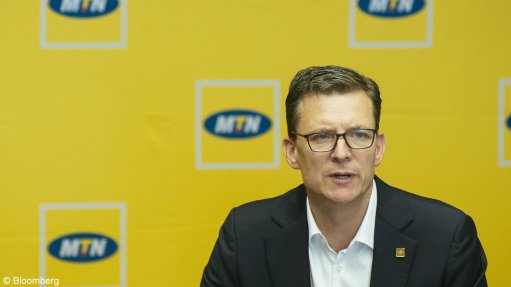 By: Natasha Odendaal     30th July 2020 Telecommunications group MTN Nigeria has reported strong growth in its key revenue lines for the six months ended June 30. Service revenue increased by 12.6% to N637-billion, while earnings before interest, tax, depreciation and amortisation (Ebitda) grew by 8.2% to N327.1-billion during the... →

By: Natasha Odendaal     29th July 2020 Seven finalists have been shortlisted from 673 applicants in the inaugural African50 Innovation Challenge. Launched in May 2019, the Innovation Challenge aimed to crowdsource innovative solutions that can improve last-mile connectivity to increase access to reliable and affordable Internet in... →

By: Natasha Odendaal     24th July 2020 JSE-listed MTN expects to post a triple-digit climb in earnings for the six months ended June 30. The telecommunications group anticipates earnings per share (EPS) to be more than 592c for the six months under review, a rise of 345 c or 140% on the 247c reported in the corresponding six months... →

By: Natasha Odendaal     23rd July 2020 JSE-listed telecommunications giant Vodacom’s group service revenue and group revenue grew 7.6% and 5.6% respectively during the quarter ended June 30, on the back of strong growth in South Africa. While the group benefited from customer demand increasing during the lockdown period in South... →

By: Natasha Odendaal     22nd July 2020 Information and communications technology group Telkom is underway with its migration from copper-based asymmetric digital subscriber line (DSL) Internet to new-generation fibre technology for customers in all fibre-ready regions across South Africa. The switch from copper to fibre where current... →

By: Natasha Odendaal     21st July 2020 Information and communications technology group Datatec reported slightly lower group revenues for the period from March to June compared with the revenues for the four months ended June 30, 2019. However, significantly lower operating costs during the period under review boosted operating... →

By: Creamer Media Reporter      20th July 2020 South African data-only mobile network rain and information and communications technology giant Huawei have launched a commercial standalone fifth-generation (5G) network in Cape Town. The standalone network, believed to be one of first in Africa, is built on rain's own sites to enhance the... →

By: Natasha Odendaal     16th July 2020 France-headquartered outdoor mobile technology specialist Crosscall has launched a new range of rugged and durable mobile devices in South Africa, all equipped with an industry-first three-year warranty. The latest suite of devices from the French brand include three new smartphones and a tablet,... →

By: Simone Liedtke     13th July 2020 Samsung South Africa has announced its Equity Equivalent Investment Programme (EEIP) plans, which are aimed at empowering previously disadvantaged South Africans, with a focus on women and youth in the information and communications technology (ICT) sector. The programme initiatives are set to... →

By: Natasha Odendaal     8th July 2020 Telecommunications giant MTN has, once again, been named South Africa’s best mobile network for the second quarter of 2020. The MyBroadband Insights quarterly Mobile Network Quality Report shows that MTN has a network quality score of 9.94 during South Africa’s lockdown, higher than its first... →

By: Natasha Odendaal     7th July 2020 Data network provider rain and Pargo have more than doubled the number of pick-up points available for rain’s fourth-generation (4G) Sim cards amid a growing demand for the data-only Sim cards. There are now 260 Pargo pick-up points at selected Clicks stores across Gauteng, KwaZulu-Natal, the... →

By: Creamer Media Reporter      26th June 2020 Telecommunications group Vodacom has appointed Sitho Mdlalose as interim CFO, effective July 1. This follows the resignation of Till Streichert, who will leave the position of CFO on June 30. →

By: Natasha Odendaal     25th June 2020 The Competition Tribunal has approved a consent agreement between the Competition Commission and telecommunications group MTN on data pricing. In terms of the agreement, MTN will reduce the data prices of its 30-day prepaid bundles across channels; offer all its customers a daily free capped data... →

MTN to launch 5G network in South Africa next week

By: Reuters     24th June 2020 Mobile operator MTN Group will launch its 5G commercial network in South Africa next week, joining Vodacom Group and Rain in the race to expand fifth-generation technology in the country. The firm said on Wednesday it is hosting a virtual launch event on June 30, where MTN South Africa CEO... →

By: Natasha Odendaal     23rd June 2020 A new Digital Economy Master Plan is being developed to build a sustainable future digital ecosystem enabling South Africa to become a hub of all digital infrastructure serving the African continent. The Department Communications and Digital Technologies is preparing to publish the Digital... →

By: Reuters     23rd June 2020 South Africa's third-biggest telecom operator Cell C said on Monday it plans to lay off 960 workers as it restructures its operations to align the organisation with its new operating model. Unlisted Cell C, in which Blue Label Telecoms has a 45% stake, said it has initiated discussions with... →

By: Natasha Odendaal     22nd June 2020 JSE-listed Telkom has suspended its dividend payouts for the next three years from the 2021 financial year to redirect the capital to acquire much-needed spectrum and complete its capital expenditure (capex) programme to ensure future sustainability. The group, which announced its intention of... →

Telkom to report drop in earnings for year

By: Creamer Media Reporter      15th June 2020 JSE-listed Telkom expects a double-digit drop in earnings for the year ended March 31 as restructure costs and one-off Covid-19-related impairments slash headline earnings per share (HEPS) and basic earnings per share (BEPS). HEPS is expected to decrease between 65% and 70% to between 186.2 c and... →