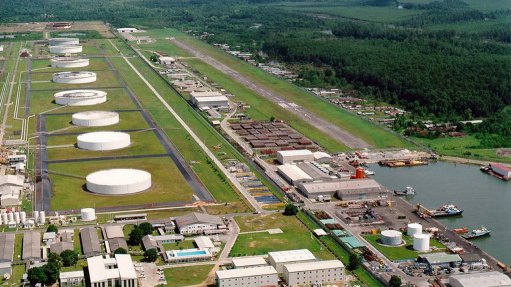 Photo by Chevron Nigeria
ESCRAVOS GAS-TO-LIQUIDS PROJECT In June the plant, which Sasol has a 10% share in, achieved first production

By: Ilan Solomons     24th October 2014 The use rate of the flagship Oryx gas-to-liquids (GTL) project – the joint venture (JV) between South African energy and chemicals group Sasol and Qatari State-owned Qatar Petroleum – increased from 81% to 97% over the past three years. Speaking at the group’s year-end financial results last... → 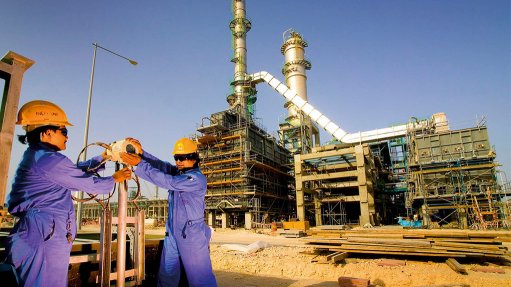 Repositioning results in sale of Iranian and German businesses

By: Ilan Solomons     24th October 2014 South African energy and chemicals group Sasol completed the disposal of its German and Iranian assets in the past year to “strategically reposition” its global operations. Speaking at the company financial results announcement last month in Rosebank, Johannesburg, Sasol president and CEO David... → 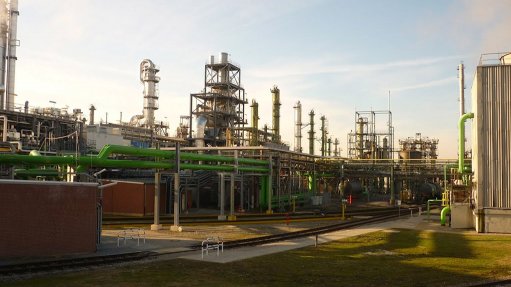 24th October 2014 Sasol Techno X, the largest career expo in the country, drew 20 023 learners in its effort to inspire and enthuse grade 9 to grade 12 learners. Held from August 11 to 15, at the Sasol ChemCity Eco-Industrial Park, in Sasolburg, the exhibition attracted visitors from seven provinces and learners... →

24th October 2014 Petrol and chemicals company Sasol, in partnership with the South African Football Association (Safa), launched a football talent development programme in the Fezile Dabi district, at the Harry Gwala Sport Centre, in June. This is the second leg of the partnership that impacts the local football... →

24th October 2014 Two groups of environmental rights organisations have given notice of their intention to seek consent to be admitted as friends of the court (amici curiae), in court proceedings launched in May by energy and chemical company Sasol and crude oil processing and refining company the National... →

24th October 2014 Through Sasol Oil, chemical and energy company Sasol’s fuels marketing and sales business, R100 000 will be invested in the Nelson Mandela Bay and George areas. This will be implemented through the company’s Friendly Neighbour initiative that will see Sasol’s retail outlets in the area take an... → 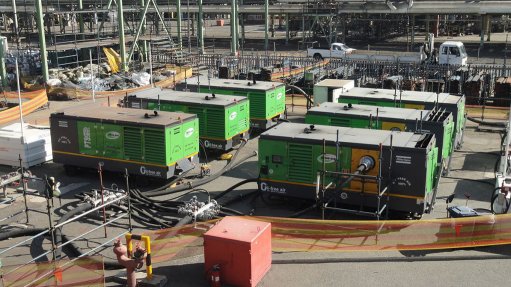 CREATIVE COMPRESSOR SOLUTION The compressors were initially designed as oil-free air compressors, and had to be modified to accommodate the flow of nitrogen 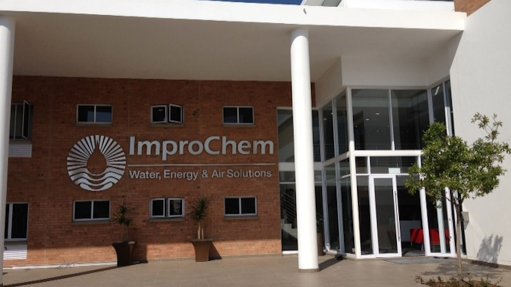 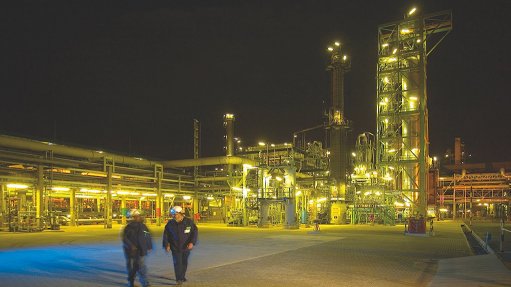 By: Zandile Mavuso     25th October 2013 Integrated energy and chemicals company Sasol notes that mathematics, science and technology play an important role in the country and, to compete favourably with developed and emerging economies, South Africa needs to produce ten times more engineers than what it currently does. →

Expansion in line with customer demand

By: Zandile Mavuso     25th October 2013 Secunda-based process engineering company CDE Process built a new drafting and piping department in the first quarter of 2013, which is expected to be fully operational by the end of October. →

By: Zandile Mavuso     25th October 2013 Energy and chemicals company Sasol announced last month that it had contributed R135-million to date to the Govan Mbeki and Metsimaholo municipalites, in the Free State and Mpumalanga respectively, as part of its commitment to the Ikusasa public–private partnership (PPP). →

By: Zandile Mavuso     25th October 2013 Integrated energy and chemicals company Sasol has made water management a strategic priority as water management is a security-of-supply and regulatory risk to the company worlwide. →

By: Anine Kilian     25th October 2013 Construction on South African energy and chemicals group Sasol’s $7-billion ethane cracker, located in the US state of Louisiana, will start in 2014, following the final investment decision. Sasol CEO David Constable pointed out that this forms part of Sasol’s strategy of building globally... →

By: Anine Kilian     25th October 2013 A further 160 line items have been added to piping distributor and services provider Rare’s supply contract with petrochemicals company Sasol. The contract for the supply of all the group’s carbon steel pipes, fittings and flanges at its Sasolburg and Secunda plants has been extended for another... →

By: Anine Kilian     25th October 2013 The much anticipated winners of the 2013 Sasol New Signatures art competition were honoured at the awards ceremony held at the Pretoria Art Museum, on August 28 . Recognised as the longest running national art competition in South Africa, the annual competition offers an opportunity for emerging... →

25th October 2013 The Sasol Bird Fair, the largest fair of its kind in Southern Africa, which took place at the Johannesburg Zoo in May, is a project of BirdLife South Africa, sponsored by Sasol, in partnership with Johannesburg Zoo and City Parks. The successful event presented two days of fun and learning for... →

By: Anine Kilian     25th October 2013 South African petrochemicals company Sasol expects to spend up to $14-billion on the GTL plant, which would be the first of its kind in the US, Sasol CEO David Constable said at Sasol’s financial results presentation, which was held in Johannesburg last month. →

By: Zandile Mavuso     25th October 2013 Integrated energy and chemicals company Sasol reports that its sharpened strategic focus and significant progress in relation to its US megaprojects and its initiation of a complete organisational redesign have influenced its all-round good perfomance in 2013, despite the challenging rand/dollar... → 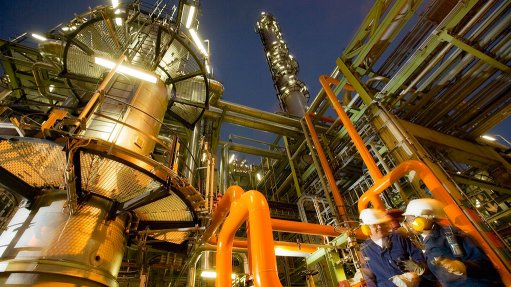 SASOL OPERATIONSSasol aims to implement initiatives, which address cost creep and organisational complexity to ensure that it becomes a more effective, efficient and competitive organisation over the long term

25th October 2013 Integrated energy and chemicals company Sasol’s R1.3-billion C3 stabilisation project, in Secunda, is on track to begin commercial operation, scheduled for the middle of 2014. →

25th October 2013 Integrated energy and chemicals company Sasol continues to grow both locally and internationally as it experiences growth globally in its operations. →

By: Yolandi Booyens     26th October 2012 Although government has lifted the moratorium on shale gas exploration in the Karoo, petrochemicals giant Sasol is not planning on further pursuing shale gas opportunities in the area at this stage, as its acreage is not promising from a geological perspective, Sasol Technology executive manager... →

By: Samantha Herbst     26th October 2012 With the abundance of gas currently available at a low price, especially in North America, the future of energy looks bright for petrochemicals group Sasol, CEO David Constable said at the company’s 2012 financial results presentation last month. He stated that growing demand for oil underpinned... →

By: Yolandi Booyens     26th October 2012 In the minds of many South Africans, petrochemicals group Sasol must give back to the country through extra taxation or nationalisation because government established it, says XMP consulting owner Xavier Prevost, reflecting on a comment made by the South African Communist Party in July that... →

By: Yolandi Booyens     26th October 2012 The value of chemicals production is estimated to grow to $720-billion in the European Union, $565-billion in the US and $605-billion in China by 2020, petrochemicals group Sasol executive manager for research and technology Sven Godorr told a South African Institution of Chemical Engineers... →

By: Samantha Herbst     26th October 2012 As part of its long-term commitment to corporate social investment (CSI), energy and chemicals group Sasol, in collaboration with the Department of Health, unveiled a series of community projects in August that the group’s corporate affairs team has been working on since 2010. →

By: Yolandi Booyens     26th October 2012 Business was a natural partner of many great initiatives and art was no exception because it helped to progress South Africa’s development into a nation that embraced diversity across all platforms, petrochemicals group Sasol executive director Nolitha Fakude said in August at Sasol’s New... →