By: Jonathan Rodin     15th August 2014 Peugeot Isando, a division of the Kempston Motor Group, started the expansion of its top performing dealership in June, with the launch taking place at the dealership in September. The expansion comprises an amalgamation with Peugeot East Rand at bigger premises, in Isando. The specialised... →

15th August 2014 Since the launch of asset management and consumer solutions provider QCIC’s vehicle tracking device QIC-SUR in June 2012, the company has received overwhelmingly positive feedback from the market, says QCIC director Brian McKenzie. “The device has proven to be particularly popular for automotive... →

15th August 2014 An increasing number of manufacturers and other suppliers are shipping consolidated container loads of products from point of origin to South Africa. Using a local logistics company, the shipment is then broken down into individual orders and delivered directly to customers, says distribution... →

By: Jonathan Rodin     15th August 2014 The international logistics industry is on the cusp of a paradigm shift with regard to the way in which organisations manufacture and ultimately transport goods from one location to another, says logistics company DHL Supply Chain strategy director Warren Brusse. Historical attitudes toward... →

By: Jonathan Rodin     15th August 2014 Johannesburg-based DCD Rolling Stock, a division of international manufacturing and engineering company DCD Group, has received supply orders for its 24 t and 35 t diesel hydrokinetic (DHK) Funkey shunting locomotives from clients operating in the mining and industrial processing sectors over the... →

15th August 2014 Crane company Konecranes launched the Boxhunter container gantry in May to the local market, which is built around the operator’s graphical user interface (GUI), says Konecranes service, sales and marketing director John MacDonald. He explains that the crane operator is now at ground level, as... →

15th August 2014 The latest trend report by logistics company DHL’s trend research team, ‘Augmented Reality (AR) in Logistics’, aims to deepen the understanding of AR and raise awareness of its potential applications in the logistics industry. AR refers to a live, direct or indirect, enhanced view of a real-world... →

15th August 2014 Brelko Conveyor Products is a local manufacturer of belt cleaning equipment, with a global reach through branches, distributors and agents in more than 40 countries. Established in 1987, Brelko supplies and advises the bulk materials handling industry on spillage control. The company also offers... → 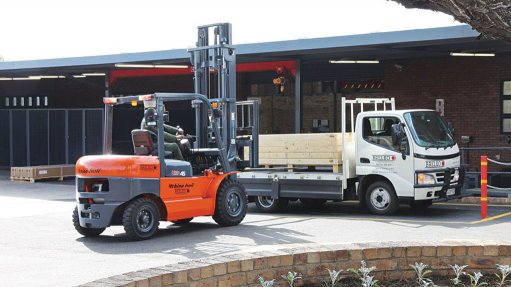 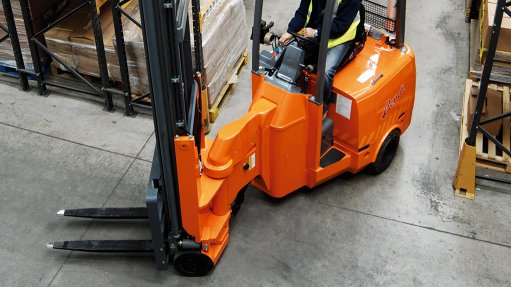 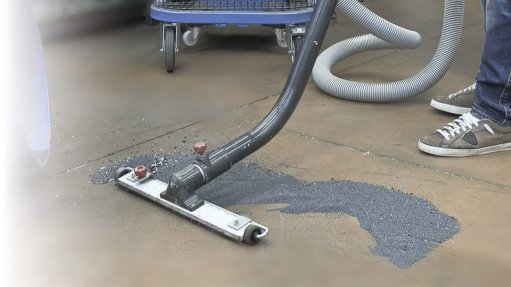 15th August 2014 When it comes to Mobile Elevating Work Platforms (MEWPs) there is little doubt about the professionalism and expertise of Goscor Hi-Reach MD George Landsberg and his team. “Since inception, our goal has been to be the preferred supplier of MEWPs in Southern Africa and we have come a long way in... → 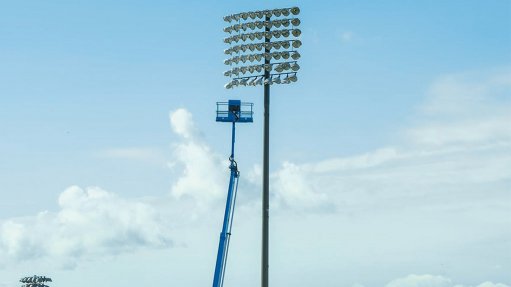 15th August 2014 Goscor Power Products (GPP) has built an enviable reputation across a wide range of sectors, including construction, agriculture, mining and general industry where it distributes world-class products including pumps, generators, welders, firefighters, engines, rammers, rollers and compactors from... →

15th August 2014 The rental business – particularly in the capital equipment market – is not an easy one. Yet, this is an area where the Goscor group has excelled. Both subsidiaries and specialist rental companies, Goscor Rental (GR), which focuses on warehouse materials handling equipment, and Goscor Access... → 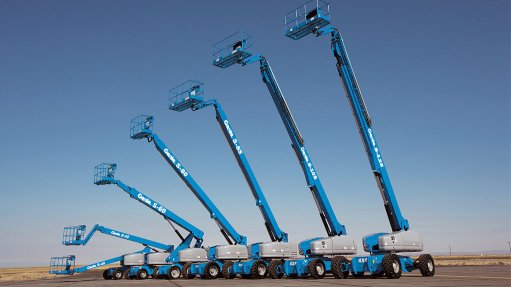 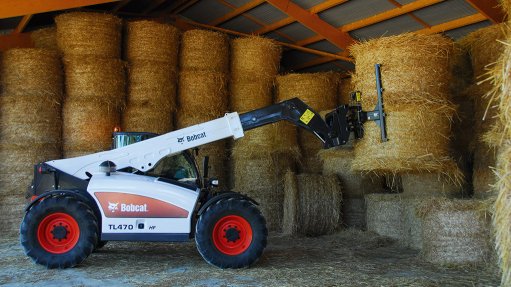 15th August 2014 “Passion and excellence are an unbeatable mix in the character of an organisation,” says Goscor CEO Neil Wilson. “These are the ingredients that have made us successful for the past 30 years and, I have no doubt, will do so for the next 30 years and more.” The Goscor Group philosophy is  to... → 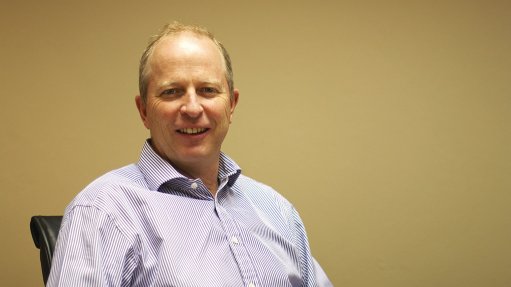 15th August 2014 Giving Industry Air To those who use it, compressed air is a vital cog in their business. Whether in a factory, a hospital, a mine or any other environment, no matter how much compressed air is used, it’s always a critical commodity. “And that’s why our customers need, and get from us, a... → 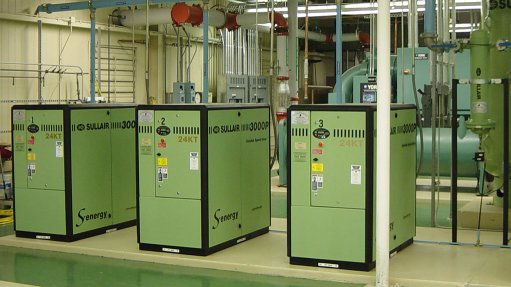 By: Jonathan Rodin     15th August 2014 South Africa-based multinational engineering company Condra is receiving positive feedback on the testing of its prototype high-speed, high-lift crane technology, which is designed and manufactured for fast-tracking the presink phase of new mineshafts. “Radically different from the level-luffing... → 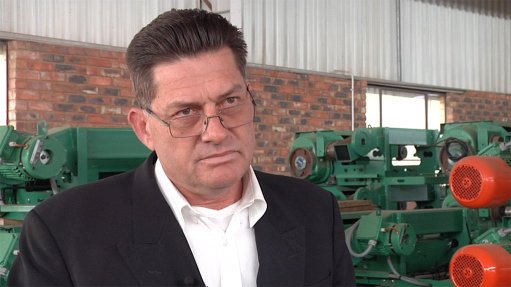 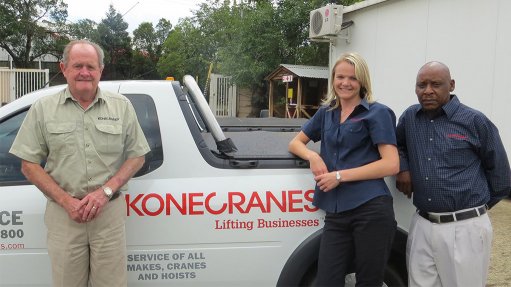 31st January 2014 Crown lift truck company equipment, which is supplied in South Africa by Goscor Lift Truck Company (GLTC), has been contracted to supply a range of materials handling equipment for the frozen foods facility in Cato Ridge of wholesaler and distributor of frozen foods, Merlog Foods. → 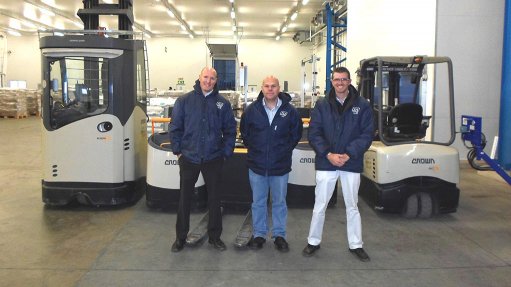 31st January 2014 Bulk materials handling equipment company Flexicon has increased the output of its tubular cable conveyor range of Flexi-Disc systems with the addition of a 15-cm-diameter system. →

FLEXI-DISC The Flexi-Disc tubular cable conveyor system is suited to handle fragile or friable food products, besides others 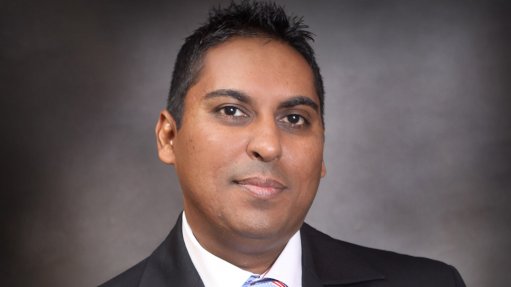 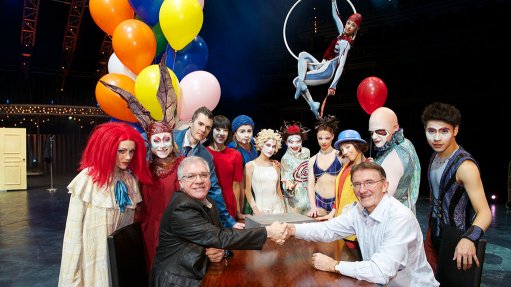 By: Donna Slater     31st January 2014 Audit, tax and advisory services firm KPMG reports that the South African materials handling industry is undergoing several changes, but that the rate at which South Africa is advancing - in terms of materials handling processes and its associated costs, technology and skills levels - it is not... → 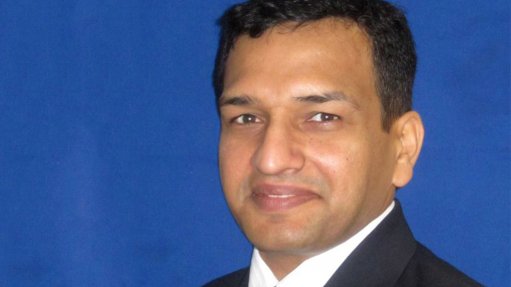 DINESH KUMAR South Africa faces the challenges of lower maturity with regard to business, especially in the sectors of consumer goods, transport and healthcare

31st January 2014 Value Materials Handling, a division of Value Logistics Limited, reports that it can improve warehouse layout, using software that calculates the ideal layout of any warehouse, resulting in maximum space utilisation. → 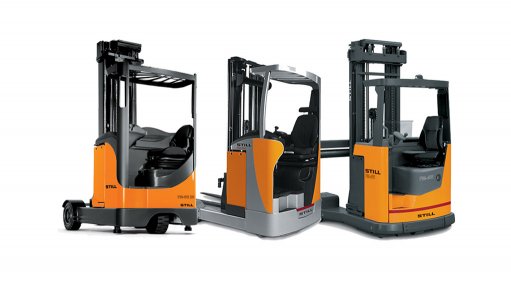 By: Donna Slater     31st January 2014 The Bakwena Platinum Corridor Concessionaire (Bakwena) has started with the second major upgrading stage of the N1 and N4 toll route, which started in 2011 and will end in 2015, leading to further improvements on more than half of the 385 km Bakwena N1 and N4 roads. → 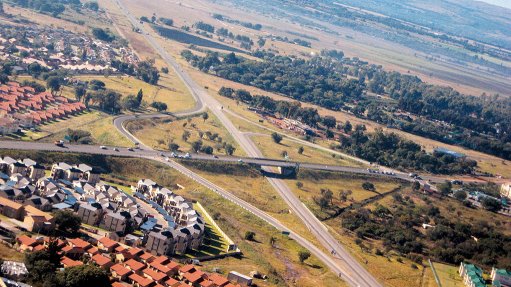 16th August 2013 To give a world-class boost to South Africa’s road maintenance capabilities, among others, bulk materials handling and mineral processing specialist Osborn is supplying the country with Astec equipment, such as the Shuttle Buggy. Osborn is a wholly owned subsidiary of US-based Astec Industries,... →

16th August 2013 “Certain vehicles and loads cannot be moved on public roads without exceeding the limitations in terms of the dimensions or mass as prescribed in the Regulations of the National Road Traffic Act,” says risk and insurance consultant Indwe Risk Services automotive and transportation risk specialist... →

16th August 2013 Global express delivery company TNT Express upgraded its Southern Africa cargo fleet in June this year as a result of a significant deal with industrial services and retail group Imperial Group to increase its capacity for both national and cross-border transportation of cargo, including large,... →

16th August 2013 Bearing company the Bearing Man Group’s (BMG’s) belting division has extended its range to include the Super-Screw, which is a flexible rubber splice developed by Minet Lacing Technology (MLT), in France, that screws onto a conveyor belt providing efficient repair in all conditions. “BMG... →