By: Schalk Burger     31st May 2013 A chemical concrete-additive causes impermeable crystals to grow inside and seal cracks, pores and capillaries and preventing liquids from penetrating the concrete. This nontoxic additive can be used to seal concrete structures in potable water systems and in more aggressive applications, such as... →

By: Megan van Wyngaardt     24th May 2013 The green-building concept has started to gain traction internationally as governments and civil society groups begin to take steps to mitigate or adapt to the negative effects of rising greenhouse-gas concentrations. Much of the focus has, however, been on large-scale built-environment... →

By: Megan van Wyngaardt     24th May 2013 The green-building concept has started to gain traction internationally as governments and civil society groups begin to take steps to mitigate or adapt to the negative effects of rising greenhouse-gas concentration.  → 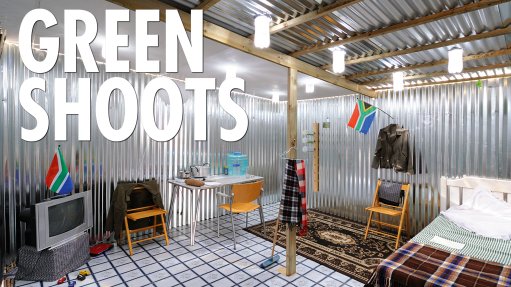 By: Idéle Esterhuizen     21st May 2013 The R15.5-million refurbishment and transformation of the National Union of Metalworkers of South Africa’s (Numsa’s) regional office, in central Johannesburg, into the first eco-friendly union office in Gauteng, would be complete in July, second VP Christine Olivier said on Tuesday. The... →

By: Joanne Taylor     17th May 2013 Standard Bank Group (SBG) has recently released its 2012 ‘Sustainability Report’ and says its sustainability programmes are mutually reinforcing and have served the company well. →

By: Irma Venter     14th May 2013 The biggest culprit in Stefanutti Stocks’ R162-million loss for the year ended February 28, is the building division’s dismal performance, said Stefanutti Stocks CEO Willie Meyburgh on Tuesday. While the proposed R323-million penalty imposed by the Competition Commission, provided for in the 2013... →

By: Irma Venter     14th May 2013 The R323-million penalty the Competition Commission proposed to levy against construction group Stefanutti Stocks was “higher than expected”, said Stefanutti Stocks CEO Willie Meyburgh on Tuesday. Announcing the company’s financial results for the year ended February 28 in Johannesburg, he noted... →

By: Irma Venter     13th May 2013 Construction group Stefanutti Stocks said on Monday that the proposed penalty it had to pay the Competition Commission in this body’s nationwide investigation into collusion in the local construction industry, had been set at R323-million. “However, with respect to this matter, the board is... →

10th May 2013 UK-based organic photovoltaic (OPV) technology developer Solar Press is investigating the potential use of flexible plastic-based OPV modules to be used for an energy harvesting application to supply power for remote, autonomous sensors within buildings. →

By: Joanne Taylor     3rd May 2013 Building developer Abland received a four-star Green Star SA certification from the Green Building Council of South Africa (GBCSA) for the design of its Alice Lane project, in Sandton. This is the GBCSA’s thirtieth green star certification. →

By: Irma Venter     19th April 2013 Basil Read says two road contracts were largely to blame for the construction group’s R170-million loss for the financial year ended December 31, compared with a R135-million profit in the previous year. Revenue was up 10% to R6.8-billion, while operating margin ended the year at –3.11%. →

By: Natasha Odendaal     18th April 2013 Telecommunications group Vodacom on Thursday unveiled its latest initiative to minimise the environmental impact of its head office, in Midrand. The R4.2-million rainwater harvesting project, which Vodacom said was the largest in South Africa, harvests one-million litres of rainwater a month,... →

12th April 2013 Global electrical and digital building infrastructure specialist Legrand has designed a flexible low level Soluflex cable floor system, for use in the work environment, which is a new addition to its cable management system. →

By: Natalie Greve     8th April 2013 The Department of Environmental Affairs (DEA) is currently awaiting the findings of an investigation by a special audit committee relating to the use of consultants during the awarding of the construction and maintenance tender for its new R8-billion green offices. This followed the release of a... →

By: Ilan Solomons     5th April 2013 The trend towards green building and the concept of greening existing buildings have been slow to take off in South Africa, as it is a voluntary exercise, says property investment holding company Growthpoint Properties, utilities Essop Basha. “There is not a massive demand for green space and,... →

By: Ilan Solomons     5th April 2013 The polyvinyl chloride (PVC) range of fence droppers from PVC and high-density polyethylene water reticulation, drainage pipe and fitting systems expert DPI Plastics is expected to gain measurable market share during 2013. "DPI Plastics has developed a strong reputation over the decades as a... →

By: Ilan Solomons     5th April 2013 Phase 2 of the Cato Manor retrofit project, which was launched in Durban, will result in 26 low-income houses being retrofitted and it aims to illustrate the benefits of low-emission developments, including the socioeconimic benefits to the community, says Australian High Commission in South... →

By: Irma Venter     27th March 2013 Basil Read said on Wednesday that two road contracts were largely to blame for the construction group’s R170-million loss for the financial year ended December 31, compared with a R135-million profit in the previous year. Revenue was up 10% to R6.8-billion, while operating margin ended the year... →

By: Irma Venter     14th March 2013 Building and civil products supplier and manufacturer Dawn reported a healthy improvement in its financial wellbeing on Thursday, recording R90.1-million profit after tax for the six months ended December 31, 2012. This was an 88% improvement over the comparable period in the previous financial... →

By: Sashnee Moodley     15th February 2013 In a bid to contribute to market transformation geared towards sustainability in the Western Cape tourism and construction industries, the environment-friendly Hotel Verde, in Cape Town, is installing geothermal heating and cooling designs worth R26.6-million.  →

By: Irma Venter     13th February 2013 South Africa needed to convene a “Codesa 3 or something similar” on its mining industry, said Group Five CEO Mike Upton on Wednesday. “We are not finding each other.” Codesa 1 and 2 refer to the Convention for a Democratic South Africa, which saw the country in the early 1990s negotiate its way... →

By: Irma Venter     13th February 2013 Construction company Group Five was not being investigated by the National Prosecution Authority (NPA) for any anticompetitive behaviour, said Group Five CEO Mike Upton on Wednesday as he announced the construction company’s interim financial results in Johannesburg. The media had been awash with... →

By: Idéle Esterhuizen     8th February 2013 The new No 1 Silo office building at Cape Town’s Victoria & Alfred (V&A) Waterfront has been awarded a six-star Green Star SA rating by the Green Building Council of South Africa (GBCSA). The Green Star rating system was established by the GBCSA in 2008 with the aim of evaluating the potential... →

8th February 2013 Wind farm Metrowind Van Stadens has installed solar-powered streetlights in the communities of Shamrock and Witteklip, in the Eastern Cape. The lights were commissioned in December and provide transformational light for local residents.  →

By: Joanne Taylor     1st February 2013 Petroleum products group Engen has completed a two-year greening pilot project, during which it made multiple energy and water saving alterations at selected service stations in neighbouring countries. →

By: Joanne Taylor     1st February 2013 Data processing company Systems Applications and Products (SAP) Africa has signed the 49M pledge to make a concerted contribution to the reduction of electricity consumption on the continent. →

By: Natalie Greve     25th January 2013 The Green Building Council of South Africa’s (GBCSA’s) signature Green Star Accredited Professional course, which introduces the Green Star rating tools and is the first requirement for obtaining status as a Green Star SA-accredited professional, is set to take place in Cape Town next month. The... →

By: Irma Venter     25th January 2013 A new body, the Green Roads Council of South Africa (GRCSA), is seeking to develop a system rating the sustainability of road design and construction in the country. The South African Federation of Civil Engineering Contractors (Safcec) serves on the interim board of the GRCSA, along with other... →

Despite some challenges, most property market segments remain bouyant

How to create a cloud migration strategy for your business

Four industries under one Roof presents the biggest Trade Show

PMI’s Africa Conference returns to In Person format, to be hosted In Nigeria