Carbon tax will not be implemented if not ready – Treasury official

By: Terence Creamer     18th June 2013 South Africa’s National Treasury is still aiming to institute a carbon tax on January 1, 2015, but chief director for economic and tax analysis Cecil Morden reports that government will only move ahead should it feel that the tax is ready for implementation. Confronted at a National Business... →

By: Reuters     18th June 2013 China launched its first pilot carbon emissions exchange on Tuesday, though plans for a nationwide roll out and efforts to apply the scheme to some polluting heavy industries could be undermined by a slowdown in the world's No.2 economy. High-emission industries such as aluminium and steel are... →

By: Natalie Greve     14th June 2013 The United Nations (UN) Least Developed Countries (LDCs) collective has requested that industrialised nations provide detailed information about the finance they are willing to provide to aid vulnerable States in their adaptation to, and mitigation of, climate change. This information should be... → 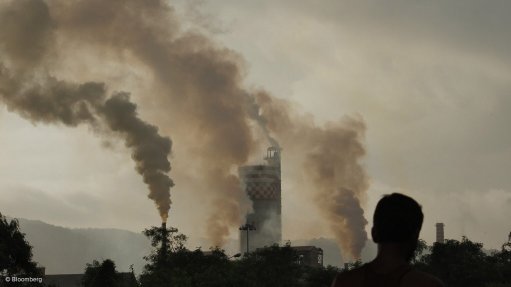 By: Terence Creamer     4th June 2013 Steel producer ArcelorMittal South Africa (Mittal) has again warned that the National Treasury’s proposed carbon tax will have a yearly negative financial impact on the company of between R600-million and R650-million. It has also confirmed that it is preparing a detailed response to the National... →

By: Anine Kilian     29th March 2013 Carbon advisory firm Promethium Carbon, together with the Climate Disclosure Standards Board (CDSB), launched a publication earlier this month that provides reporting committees and internal auditors with a reference tool on integrated and climate-change-related reporting, as the effects of... →

By: Anine Kilian     29th March 2013 Information technology (IT) consulting company Dataflo is using German multinational software corporation SAP’s technology to assist and advise businesses in making their business divisions such as production, procurement and logistics more environmentally aware. One such example is through SAP... →

By: Terence Creamer     13th March 2013 Professor of climate strategy at the Norwegian Business School Jorgen Randers, who co-authored of the trailblazing 1972 book The Limits to Growth and last year authored 2052 – A Global Forecast for the Next Forty Years, has warned that investments related to climate adaptation will rise strongly... →

By: Terence Creamer     11th March 2013 The unintended consequences of South Africa’s proposal to introduce a carbon tax as from January 1, 2015, had to be analysed, Sasol CEO David Constable said on Monday. Speaking following the release of the energy and chemical group’s interim results, Constable noted that South Africa would be... →

By: Sashnee Moodley     15th February 2013 The integration of Swedish technology into local dairy company Coega Dairy’s processing plant at the Coega Industrial Development Zone outside Port Elizabeth, has elevated the plant’s status to the “most environment-friendly and energy efficient operation in the southern hemisphere”, according to... →

SA urged to implement green econ development only if viable

By: Idéle Esterhuizen     13th February 2013 South Africa must only adopt a green approach to developing its economy, if it made economic sense, World Wide Fund for Nature South Africa Living Planet Unit head Saliem Fakir said on Tuesday. Speaking at the first leg of the Green Growth Roadshow, which is funded by the British High Commission... →

By: Joanne Taylor     1st February 2013 Data processing company Systems Applications and Products (SAP) Africa has signed the 49M pledge to make a concerted contribution to the reduction of electricity consumption on the continent. →

By: Natasha Odendaal     18th January 2013 Research into biodiversity and human society could be improved through the development of a global biodiversity monitoring system similar to the system implemented to monitor climate change, the Council for Scientific and Industrial Research (CSIR) said. Questions such as what fraction of... →

By: Natalie Greve     10th January 2013 Communities with low socioeconomic status based on income, education and housing would be the most vulnerable to the effects of climate change, a new Water Research Commission (WRC) study showed. →

By: Terence Creamer     9th January 2013 South Africa, which relies primarily on coal to produce most of its electricity, is set to raise the profile of its carbon capture and storage (CCS) initiatives in 2013, amid a call from the International Energy Agency (IEA) for a renewed focus on the deployment of CCS as part of international... →

By: Terence Creamer     14th December 2012 South Africa’s State-owned electricity utility Eskom is considering an ambitious plan to begin burning biomass alongside coal at some of its power stations, as part of a strategy aimed at lowering the group’s sizeable carbon footprint.  →

By: Natasha Odendaal     11th December 2012 A new survey by the Asset Owners Disclosure Project (AODP) has found that most of the world’s largest investment and pension funds are unprepared for climate change and lack climate risk strategies, but identified South Africa’s Government Employees Pension Fund (GEPF) as a “noteworthy... →

By: Terence Creamer     22nd November 2012 A total of 590 funding applications for potential sustainable-development projects worth R10.9-billion have been received following the issuance of request for proposals (RFP) under the South African government’s newly established Green Fund. The RFP closed on October 24, with funding... →

By: Idéle Esterhuizen     20th November 2012 Investors have limited choices when it comes to tackling investment constraints like carbon and water risks, highlighting the need for government and regulators to urgently take action, a new report by WWF South Africa (WWF-SA) and WWF-UK has shown. The report, ‘Navigating Muddy Waters: Securing... →

12th October 2012 Existing and proposed hydropower dams are not properly evaluated for the risks of natural hydrological variability, which is extremely high in the Zambezi river, not to mention the risks posed by climate change, says US State of Wisconsin Department of Safety and Professional Services hydrologist... →

By: Natasha Odendaal     27th September 2012 The global mining water and wastewater sector was expected to grow as the focus on sustainable water solutions within the mining industry increased, a recent report by Frost & Sullivan found. In its ‘CEO 360 Degree Perspective of the Global Mining Water and Wastewater Treatment Market’ report,... →

By: Natasha Odendaal     21st September 2012 As the teams entered the third leg of the 11-day 5 400 km Sasol Solar Challenge, it emerged that the South African teams had started gaining momentum as more cars reached the finishing point on their own steam. The two Japanese teams, Tokai University and team Kenjiro Shinozuka, held on to the... →

Solar car challenge gets under way on Tuesday

By: Natasha Odendaal     17th September 2012 Sasol’s Solar Challenge South Africa was set to kick off on Tuesday after 12, mostly academic, teams completed multiple final vehicle testing processes at Zwartkop Raceway, in Pretoria, on Monday. The competition, which was held by the Federation Internationale de l’Automobile every two years,... →

31st August 2012 A domestic smart grid must be mapped out correctly to avoid any unnecessary and awkward setbacks, as have been experienced by some projects internationally, and requires government to partially fund the projects, says Frost & Sullivan energy and power Africa business unit leader Cornelis van der... →

By: Zandile Mavuso     17th August 2012 Business has, over the past 20 years, recognised how it impacts on the world, but only recently has it become evident how the world affects the way in which companies do business, reports professional services firm KPMG. →

By: Zandile Mavuso     17th August 2012 The National Cleaner Production Centre of South Africa (NCPC-SA) reports that its Resource Efficiency and Cleaner Production (RECP) programme and the Industrial Energy Efficiency Improvement (IEE) project have achieved some successes since their inception. →

By: Yolandi Booyens     10th August 2012 Climate change could result in a positive outcome for the potato industry and possibly lead to potatoes becoming one of the top staple crops in the world, says University of Pretoria (UP) Potato Pathology Programme manager Dr Jacquie van der Waals. She says the potato appears to be the only crop,... →