By: Kimberley Smuts     8th May 2015 The establishment of construction chemicals specialist Chryso Southern Africa Group’s first subsidiary outside South Africa – Chryso Eastern Africa, headquartered in Nairobi, Kenya – is currently under way and is expected to be operational by June 2015. This development is part of Chryso Group’s... →

16th May 2014 Cement producer PPC reports that it will provide homes to more than 300, mainly semi-skilled employees of the company who do not qualify for government Reconstruction and Development Programme (RDP) housing, but are unable to afford home loans. → 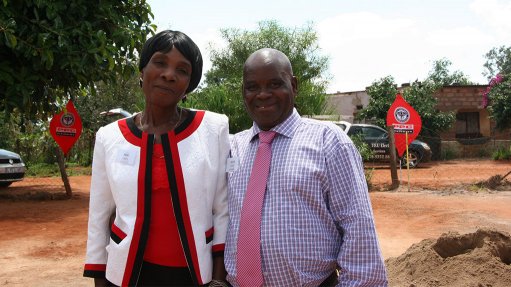 16th May 2014 The Concrete Society of Southern Africa (CSSA) is calling for nominations for its prestigious biennial Fulton Awards, which recognise and reward excellence and innovation in the design and use of concrete, with winners being announced at a gala dinner, held in the Drakensberg region on June 6, 2015. → 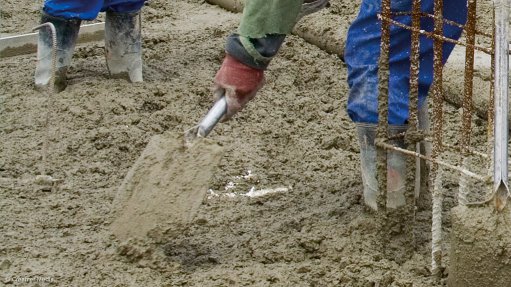 16th May 2014 The supply of 4 000 t of cement for the Jeffreys Bay wind farm posed unique challenges and entailed short deadlines so that electricity generation could begin by this month. → 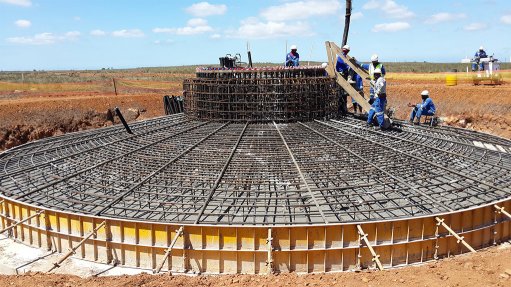 16th May 2014 An exhibition focused on the concrete industry, the Totally Concrete Expo, will take place at the Sandton Convention Centre from May 27 to 28. → 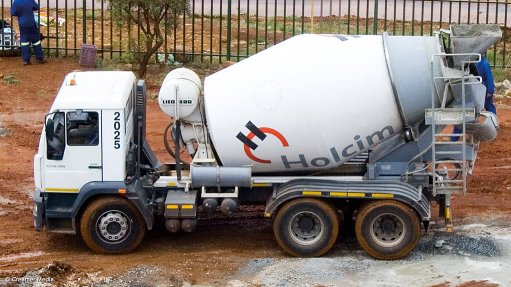 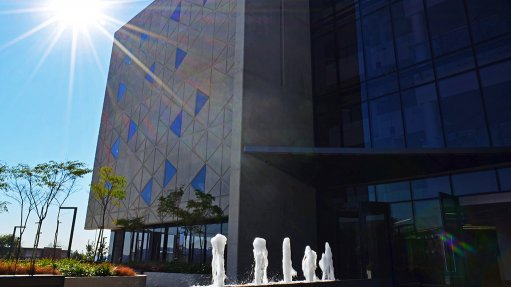 By: Donna Slater     16th May 2014 The South African concrete industry continues to be successful and is on par with international best practice in terms of large-scale projects, reports nonprofit educational organisation The Concrete Institute, based in Midrand. → 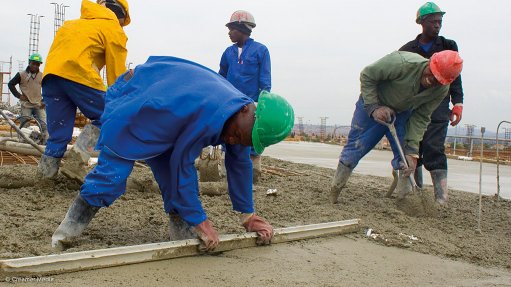 By: Donna Slater     16th May 2014 The tilt-up method of using concrete in the construction of buildings can be one of the most cost-effective building techniques when using concrete, reports Midrand-based cement and concrete advisory organisation The Concrete Institute. → 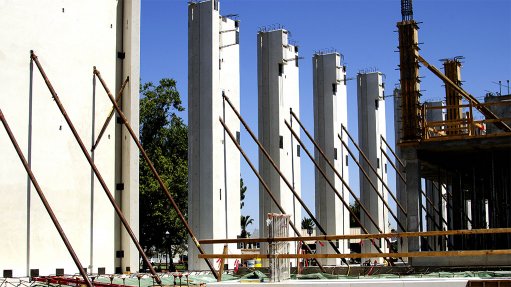 By: Donna Slater     16th May 2014 Logistics solutions company CargoWare’s FleetLogiX fleet management software has been used to manage 1 000 Volvo trucks, tasked with moving millions of tons of imported cement from the Port of Djibouti, in Ethiopia, to cement producer Derba Midroc Cement’s (DMC’s) new plant and, from there, to... →

By: Anine Kilian     17th May 2013 Economic growth in sub-Saharan Africa is outpacing the rest of the world with the region’s economy expected to grow by 6.1% in 2014, and The TotallyConcrete Expo is the cement, concrete and construction industry’s soloution to keeping up with the pace of future demand, as industrial, commercial,... →

By: Anine Kilian     17th May 2013 Fastening and construction power tool manufacturer Hilti launched its new chemical anchor called HIT HY-200, used in anchoring and rebar applications, at the end of last year, replacing the current HIT HY-150 chemical anchor. The new chemical anchor, which was developed at Hilti’s laboratories in... →

By: Anine Kilian     17th May 2013 To broaden the availability of knowledge about concrete and concrete equipment to the public and industry, brick, block and paving machinery supplier Pan Mixers South Africa (PMSA) will build a training centre behind its showroom, which was launched in Boksburg last month. “We want to teach... →

Admixture industry on the incline

By: Anine Kilian     17th May 2013 The concrete admixture industry, which is directly affected by the cement industry, is recovering from negative growth consumption that it experienced in 2011. The industry experienced a slight 2.7% rebound in 2012 and is expecting further growth this year. →

By: Anine Kilian     17th May 2013 Chemical company a.b.e Construction Chemicals’ upgraded manufacturing plant, in Boksburg, is better equipped to undertake cementitious blending, owing to its dustless technology. The upgrade is expected to double the plant’s production capacity without having to increase staff numbers, owing to... →

17th May 2013 Cement, concrete and aggregate manufacturer Lafarge Group encourages skills, training and development, and supports its employees at all levels in order for them to develop their full potential. The company also actively recognises a responsibility to help develop the communities surrounding its... →

By: Anine Kilian     17th May 2013 The Southern Africa Readymix Association (Sarma) is continuing its efforts to implement rules and regulations to protect the readymix industry, which is picking up, from oversaturation and a lack of regulation. Sarma director Nico Pienaar tells Engineering News that there is no legislation... →

By: Anine Kilian     17th May 2013 One of the major challenges still affecting the aggregate industry is that quarries are not being used to capacity, which has put a strain on employment in the industry, states the Aggregate and Sand Producers Association of Southern Africa (Aspasa). “If quarries are used properly, it will result... →

By: Anine Kilian     17th May 2013 The core services of the former Cement & Concrete Institute (C&CI), including its training facility, information centre and consultant service, are being evaluated at the request of industry members to determine whether they are still beneficial to the industry. The C&CI, a marketing organisation... →

17th May 2013 In South Africa’s emerging economy, and particularly, within the context of the National Infrastructure Plan (Nip), local clinker and cement producers have value to add by working with government to support the R4-trillion, 15-year project states concrete and cement manufacturer Sephaku Cement.... →

By: Samantha Herbst     18th May 2012 Case studies show that concrete is a viable option as a sustainable construction material owing to its long-term impact on the environment, its energy efficiency and its thermal mass, says Cement & Concrete Institute (C&CI) MD Bryan Perrie. →

By: Samantha Herbst     18th May 2012 Business confidence in the construction industry is on the increase, which bodes well for the concrete sector, says Cement & Concrete Institute (C&CI) MD Bryan Perrie. →

18th May 2012 Construction materials group AfriSam, in January, placed an order with Austrian company Scheuch for its patented energy minimising concept (EMC) bag filter technology, which will be used in a new dust collection baghouse that is being built as part of AfriSam’s R105-million upgrade at its Ulco... →

By: Samantha Herbst     18th May 2012 The Concrete Society of Southern Africa (CSSA) is seeing positive growth in member numbers, which has grown from 30 to 50 companies in the past year. →

Industry under strain owing to lack of new projects

By: Henry Lazenby     13th May 2011 The lack of significant, new infrastructure projects in the pipeline has placed the cement and concrete industry in South Africa under pressure, the Cement & Concrete Institute (C&CI) reports. →

By: Henry Lazenby     13th May 2011 The Concrete Society of Southern Africa (CSSA) has appointed its first full-time CEO to oversee the growth of the association. Newly appointed CEO John Sheath says for many years the organisation was run through the efforts of volunteers, supported only by an administrator and an assistant. →

By: Henry Lazenby     13th May 2011 Fly ash products manufacturer Ash Resources has introduced a new fly ash additives product to its range – DuraPozzPro. The new product is the finest form of fly ash the company produces, with particles passing a 45 μm sieve, and is intended for the high-end market. The company gathers fly ash... →

By: Henry Lazenby     13th May 2011 Admixture specialist Chryso reports it is undertaking research and development (R&D) to improve and provide the additives that increase the volume and strength of concrete.  →

13th May 2011 Specialist engineering consultancy Compaction Methods has introduced the Spin Screed brand to the South African and African markets. Spin Screed is a lightweight power roller screed that produces smooth concrete surfaces fast and efficiently. The company has officially been appointed distributor... →

By: Henry Lazenby     13th May 2011 Concrete products manufacturer Rocla is developing a range of supplementary products to enhance its core range of precast concrete offerings. While the company is primarily focussed on manufacturing products such as culverts, electric reticulation poles, precast bus shelters, manholes and bulk... →

By: Henry Lazenby     13th May 2011 Consulting engineering firm Aurecon is finishing off the final minor details to the new concrete flyover at the R21/N1 interchange, in Centurion, which forms part of the Gauteng Freeway Improvement Project (GFIP). →

By: Mary-Anne O’Donnell     14th May 2010 Although Admixture specialist Chryso’s business felt the pinch from the economic difficulties in 2009, it continued to expand its product range to remain competitive in the market, launching about 15 new products yearly. →

By: Mary-Anne O’Donnell     14th May 2010 Fly ash technology specialist Ash Resources completed the commissioning of its new R1,1-million cementitious filler out loading plant, at the Matimba power station, earlier this month. The plant will produce Pozz-Fill, a product that enhances the performance of concrete. →