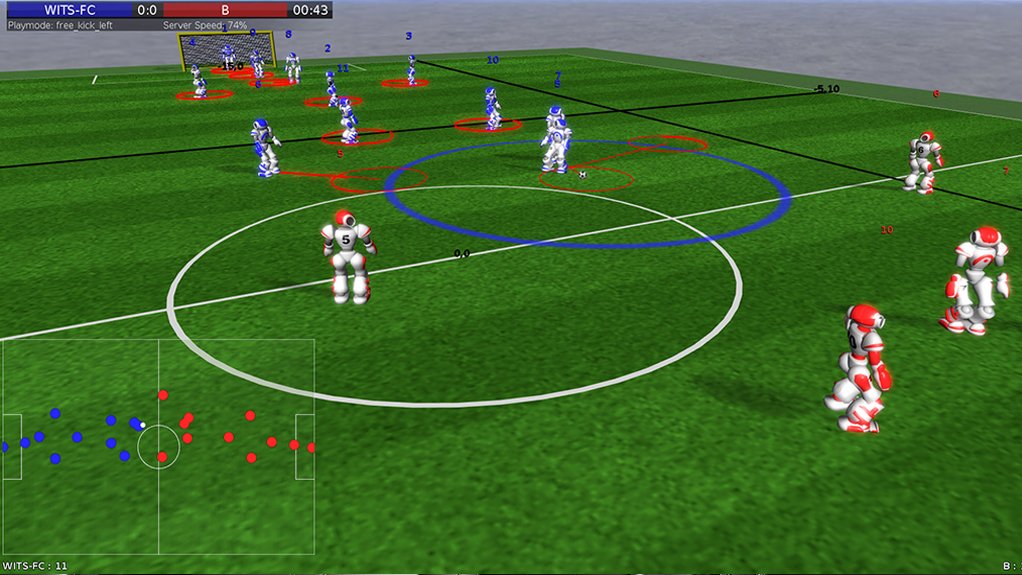 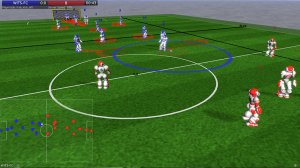 The University of the Witwatersrand (Wits) will participate in the three-dimensional simulation league of the RoboCup – a yearly artificial intelligence (AI) and robotics event with the goal to advance the state of the art of intelligent robots.

Computer science students from the School of Computer Science and Applied Mathematics (CSAM) in the Faculty of Science will compete.

The event sees teams from across the globe competing in different soccer leagues to show their mastery in AI and machine learning. The soccer robots can either be working physical robots or simulation robots.

Up to 24 teams will participate in this league that focuses on AI and team strategy. These teams are all required to develop and submit a team of independent intelligent moving agents (players) that play soccer on a virtual field.

"We tell the players what to do given a certain situation, but we did not build the stadium they play in,” Bingani and Ingram explain.

The goal is that, if the team can develop intelligent players in the simulated domain, this information can then be used in the real world where such information is not so easily obtained.

Teams are also required to submit a conference-style paper, which is reviewed by the RoboCup committee.

To promote development and innovation, there is an added requirement that each teams’ contribution contains some element of a novel approach to the problem of RoboCup. The code itself should also demonstrate the use and benefit of this new approach.

“Being new to RoboCup meant the task of implementing a unique way of solving some problem was in itself a difficult problem. However, through working together and individually, we were able to identify problems which we were also able to solve in creative ways. Specifically, our approaches to Formation assignment and Passing in the soccer game,” explain Ingram and Bingani.

“Our focus in this first iteration of competing was on adding our own high-level behaviours, which enabled the agent to make appropriate decisions according to different situations. Specifically, one component we implemented was a position assignment algorithm that seeks to optimise which agent goes to which position in a defined formation.”

The Wits FC robotics team have been in development for roughly two years. It was slow going in the beginning as the team first had to understand what was available to develop their entry. Installing the necessary software packages subsequently was difficult at the start but has been worthwhile, because the experienced gained has resulted in the team being able to create a far simpler method of doing things. These processes were then captured in tutorials that can benefit future Wits teams, Bingani and Ingram say.

“RoboCup is a wonderfully concrete application of many of the concepts that the students explore in their courses and provides exciting open-ended challenges to be solved.

“For example, they have applied ideas taught in second-year algorithms courses and postgraduate machine learning courses, while also thinking about the structure of code required for a larger project with many contributors. It also allows students of various levels the opportunity to work together in a fun and competitive environment,” says Rosman.

“RoboCup presents a great opportunity for students to work together as a team and then compete against other students from around the world. Representation from Africa has always been minimal, at best.

"For our team to be able to compete in the tournament is important for Wits’ representation internationally and providing our students with more exposure to international AI and robotics,” adds Rosman.

“These kinds of activities help promote science and technology by providing our students with a fun application of the theory in which they are so deeply immersed in their studies, and it is an accessible means of outreach to the general public as many of the challenges we tackle in research can be explained in relatable terms,” he says.

“I am proud of the students, as they are a team of undergraduates and postgraduates working together and especially as they achieved this during the difficult times over the past year owing to their passion and strong technical skills. They have been working exceptionally hard, often meeting virtually over weekends to hold mini tournaments to test out different ideas.”

By taking part in RoboCup, they are also hoping to use their experience to help other local universities start their own teams and then to establish local leagues and tournaments to further advance science and technology in the region, Rosman notes.