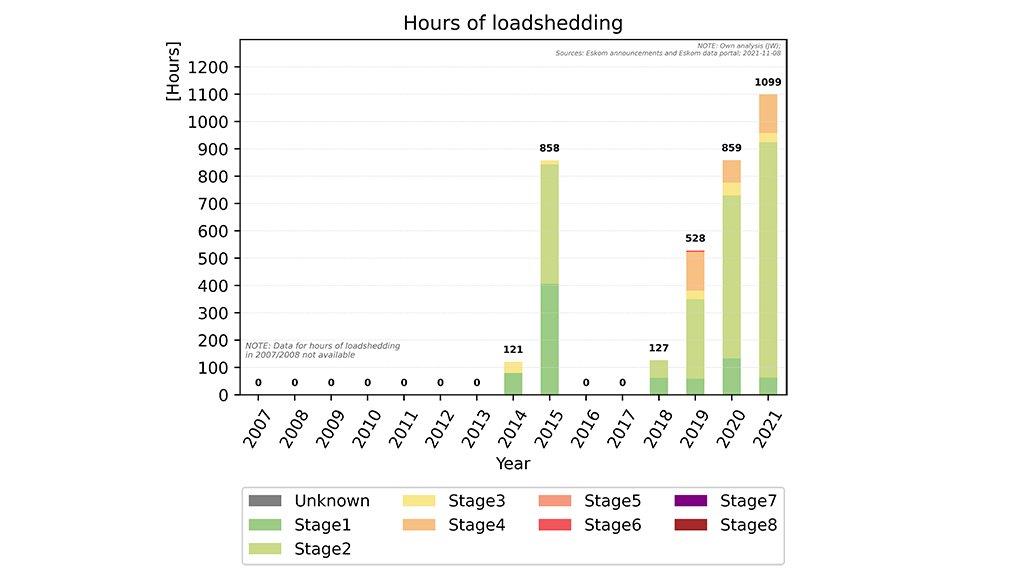 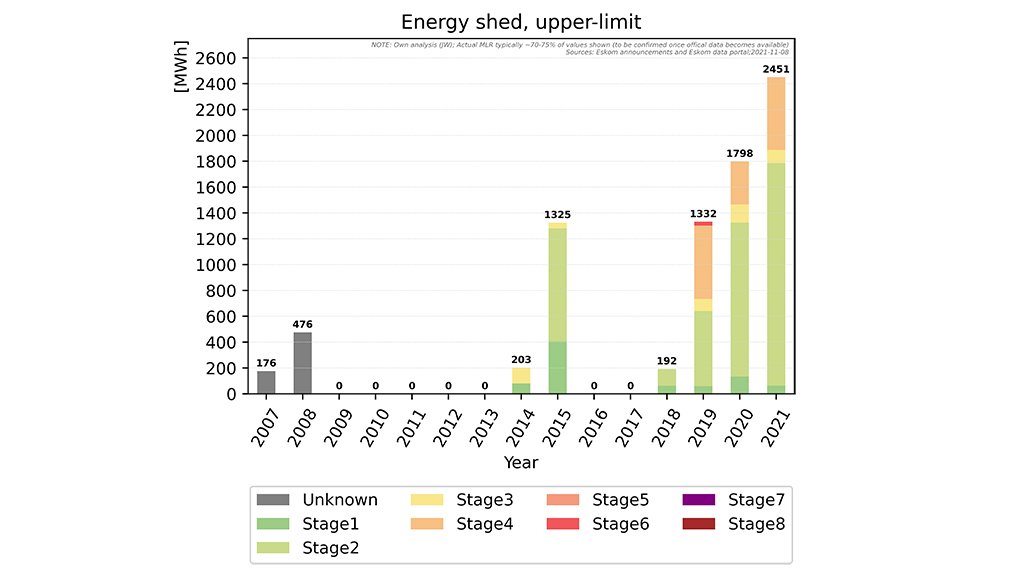 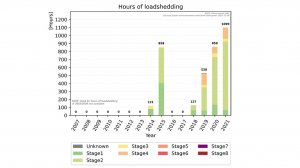 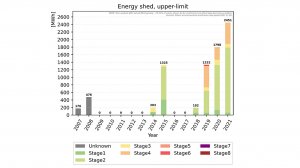 With South Africa now officially experiencing its worst-ever year of rotational power cuts, there is growing concern about both the level and flow of financing for maintenance, as well as the utility’s capacity to implement.

Initial calculations by Jarrad Wright, formerly of the Council for Scientific and Industrial Research Energy Centre, indicate that 15% of 2021 would have been load-shedding-afflicted once Eskom has fully implemented its latest round of announced load-shedding, which is officially set to continue until Saturday, November 13.

By that date, about 1 100 hours of rotational cuts would have been implemented, resulting in between 1 700 GWh and 1 800 GWh having been shed, with more than a month and a half of 2021 still to go.

“For reference, we shed 1 269 GWh in 2020 and 1 090 GWh in 2019,” Wright says, while stressing that the numbers remain unconfirmed until officially published on Eskom’s data portal package.

Only in 2015, did South Africans experience a similar level of load-shedding intensity, when 858 hours were affected and 1 325 GWh shed, mostly at Stage 2.

The intensification of load-shedding is directly proportional to the decline in the performance of the coal fleet, the energy availability factor (EAF) of which has fallen to below 65% for the year-to-date.

The EAF is well below Eskom’s 70% target and is also significantly below the 67.9% reported for the same period to the end of September 2020.

When announced, the initial objective was to improve the reliability of the under-maintained coal fleet by October this year to a point where the risk of load-shedding would be materially reduced, albeit not eliminated.

Implementation of the programme has hit several snags, however, with mobilisation initially hampered by the introduction of national lockdowns in response to the onset of Covid-19 in South Africa.

Execution problems have since evolved with much of the concern currently centred on the level of financing available for the RMR and what Eskom describes as the “timely release of capital funding”.

In a recent presentation, the utility said it needed the finances to be released at least six months prior to the start of an outage to secure the spares and services required.

It also indicated that funding had not been secured for the RMR for the next two financial years, which was undermining planning, which for a major shutdown needed to begin 24 months ahead of execution.

In a separate briefing COO Jan Oberholzer explained that neither the level of funding nor the release of the funds was in line with what was required under the programme.

“Typically, we need close to R11-billion per annum for the generation business to do proper maintenance on an ongoing basis . . . [and] we also need at least 24 months to plan it adequately.

“This financial year, we were given R3-billion and only a few months ago we were allowed an additional R3-billion, which is still short of what we really need, [while] the late timing of the provision is making it extremely difficult to execute the maintenance within this financial year,” Oberholzer explained.

CEO Andre de Ruyter said that ensuring sufficient liquidity for maintenance involved a careful balancing of the inflow and outflow of funds, which were secured either from loans and equity injections, or from internal revenue, itself a function of Eskom’s ability, or inability, to collect from its 6.7-million customers. Eskom’s municipal arrear debt stood at R35.3-billion at the end of March 2021.

“On a daily basis we are managing our cash balances such that we are never running out of cash.

“But that does mean that, in some instances, we have to throttle back on the unfettered release of cash for some of our key maintenance activities,” De Ruyter explained.

Any difference in timing between the expenditure needs of the operating units and the flow of the funds, including those arising from the National Treasury, had an impact on Eskom’s ability to release cash.

Oberholzer has also raised concerns about the state of skills within Eskom, saying that while money is key to ensuring better planning, the volatility of the coal fleet could not be addressed simply by “throwing money at the problem”.

“We have lost a lot of skills and experience over the past decade or so,” he said during a recent briefing, reporting that there is a drive to recoup some of the experience that had been lost over the recent period.

Oberholzer stressed, however, that at the heart of the current problem was a fleet that had been operated “too hard for too long” and required time and space for maintenance – time and space that was not available, owing to a generation deficiency of between 4 000 MW and 6 000 MW.