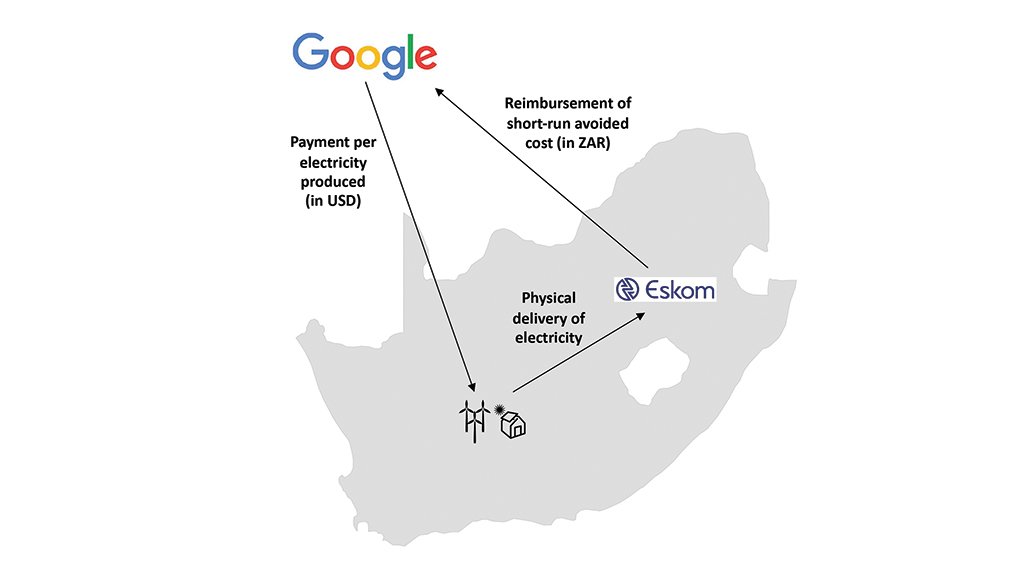 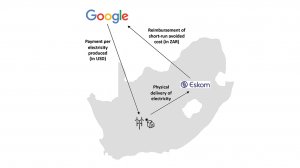 Several large multinationals, such as Google and Amazon, are actively procuring renewable energy as part of efforts to transition their operations away from fossil fuels. Typically, these companies are seeking to take physical delivery of the clean energy produced by wind and solar plants to directly decarbonise their business processes.

Given that climate change is a global problem, however, it doesn’t really matter whether the decarbonisation takes place in the US, or Europe, or South Africa, as the effect on carbon in the atmosphere is the same. Hence, a case could be made for pursuing renewables projects in regions that will deliver the largest decarbonisation benefits at the lowest possible cost. In other words, decoupling the corporate’s electricity consumption from the physical renewables assets so as to deliver the largest climate-positive return for each dollar invested.

Under such a scenario, South Africa is in a sweet spot. Firstly, the country has world-class solar and wind resources, which means that renewables assets built within its borders will be more productive and, thus, will produce renewable electricity at lower cost than those built in territories with less potent resources. Secondly, South Africa’s electricity supply industry today is dominated by coal (90% of total production). This relative carbon intensity means that each additional kilowatt-hour generated from renewables in South Africa will have a higher decarbonisation spin-off than would be the case if the same kilowatt-hour is added in a system that is less carbon intensive.

Each renewable megawatt-hour produced in South Africa translates into the avoidance of about 1.1 t of carbon dioxide. In Morocco, for example, which has equally impressive renewables resources, the figure is closer to 0.7 t/MWh, owing to the fact that that country’s electricity system is less carbon intense. In the US, the avoidance figure is only 0.5 t/MWh. There are, in fact, arguably only a handful of countries that are able to both produce renewables cheaply and deliver high carbon-avoidance yields, with South Africa and Australia being two obvious examples.

There is no easy way currently for multinationals to capitalise on these attractive decarbonisation yields. It is theoretically possible, though, to create a procurement framework that is geared towards achieving precisely that.

How Would It Work?

Recently, Google issued a request for proposals online for a global power purchase agreement (PPA) in markets where it was seeking more renewable energy to match its operational energy consumption. Following a prequalification process, developers bid a total of more than 2 GW of deals into four auctions and Google signed PPAs for ten projects comprising more than 1.2 GW of capacity.

As an aside, it is interesting to note that each of the four auctions lasted less than an hour and the entire procurement process was completed in under a year. Google noted that it took between 18 and 24 months to sign a single large deal using its traditional off-line model.

There is no reason why it would not be feasible to deploy the same global online model to procure low-cost renewable assets for their decarbonisation potency, rather than for directly meeting an operational energy consumption requirement. In other words, Google may still be consuming lower-carbon gas-based electricity in the US, but would be facilitating the creation of assets that avoid coal-based electricity in South Africa, thus yielding the highest possible return from a carbon-avoidance perspective.

To achieve such an outcome, Google could offer PPAs for, say, 500 MW each of solar photovoltaic and wind capacity in South Africa. The process would follow a typical competitive-auction model, whereby bidders with the lowest tariffs would be awarded 25-year offtake agreements with Google.

Naturally, a Google PPA is highly bankable, partly because of Google’s blue-chip credit rating and partly because its PPAs have been well refined. To make the offering even more attractive to developers and funders, Google could issue dollar-based PPAs, which would help crowd in international debt finance at interest rates that South African-based assets could not typically command. The net effect would be an incredibly competitive tariff; one that combines a best-in-class financial package with a world-class renewables resource base. Under such conditions, it is not inconceivable that tariffs would be as low as $3 c/kWh which, at the current cap exchange rate, is about 45 Rc/kWh.

The renewables asset owner, who is fully compensated by the 3 $c/kWh PPA, would then inject the electricity produced into the Eskom grid, which would immediately trigger coal and water savings. Google would then enter into an agreement with Eskom, whereby the utility passes on those avoided short-run marginal coal costs, while being left to capture any other benefits. These benefits could include the avoidance of the environmental levy and carbon taxes, or delays to the construction of new generation capacity.

What’s in it for Google, though? By producing in South Africa, Google would be buying clean electricity that is cheaper than would be the case in any other country, owing to South Africa’s superior resources, while the decarbonisation yield would be greater, owing to the fact that the clean electricity will be displacing carbon-heavy power for years to come. To make these benefits commercially tangible, Google would receive an internationally recognised and tradeable credit for the green property of the electron being produced in South Africa. This green property is separated from the physical electricity delivered but will still be recognised in the markets in which Google operates.

From a national perspective, a new dollar- denominated export product would be created. In many ways, it would be a product that is similar in nature to international tourism, as the good will be delivered in South Africa, but paid for from outside the country.

To create such a product will require the kind of policy ingenuity and regulatory flexibility with which South Africa is not currently associated. That said, it was not so long ago that the country played a pioneering role in helping to establish the reverse auction as the instrument of choice for the procurement of renewable energy globally. By applying similar foresight and innovation, South Africa has a genuine opportunity to channel some of the corporate capital becoming available for climate-mitigation projects towards assets that will not only support its own energy transition, but also help to accelerate global decarbonisation efforts at the lowest possible cost.