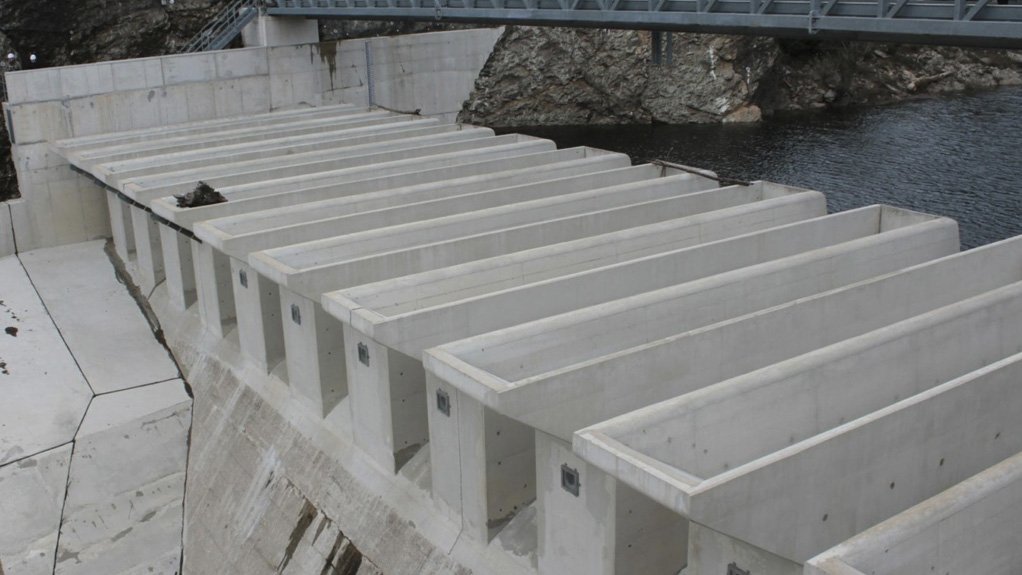 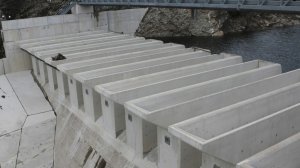 PIANO KEY WEIRS The rectangular keys are made with sloped bases, which guide flow over and away from the crest of the weir

The investigation into the structural behaviour of piano key weirs was put under the spotlight at the 2016 annual International Commission on Large Dams Meeting (ICOLD), which was held at the Sandton Convention Centre from May 15 to 20.

Speaking at the eighty-fourth edition of the meeting, consulting engineering firm Aurecon engineer Frank Denys noted that, while piano key weirs have recently gained in popularity within the field of spillway hydraulics, engineers are uncertain of their structural behaviour.

Denys cited that the research, which is currently being conducted at Stellenbosch University, focuses on the flow induced vibrations in the thin-walled structural members of piano key weirs.

“There are a number of reasons that could cause the excitation, which include oscillating negative air pressures underneath the overflow nappe, vortex shedding from the flow separation eddy in the inlet key as well as instabilities in the nappe itself,” Denys stated.

He explains that piano key weirs were first developed in the late 1990s and early 2000s as part of an investigation by French nonprofit consultants Hydrocoop and the University of Biskra, in Algeria, to improve on the well known labyrinth weir.

“The typical labyrinth weir has a zig-zag plan layout such that its total length is longer than that of a straight linear weir. Piano key weirs take this concept one step further by having an alternating rectangular shape in plan.”

The rectangular keys – with repeating staggered overhangs that resemble piano keys – are made with sloped bases, which guide flow over and away from the crest of the weir, increasing the discharge capacity for a given overflow head.

According to Denys, motivations for the use of piano key weirs are varied but revolve around their large specific discharge. As a result, he noted that the weirs were ideal for dam safety improvement programmes. He also added that the weir assisted in the rehabilitation of, or upgrades to, existing water resource schemes such as the raising of dams.

“As the weirs provide more discharge, they increase the safety of a dam that could possibly be too full or overflowing. These weirs are being investigated for use in South Africa as they are able to increase the overall capacity of the dam.”

He added that certain dams with limited storage capacity could raise their full supply water level to give it additional storage capacity. This would ordinarily lead to a loss in spillway capacity. However, adding a piano key weir, he noted, allowed the original discharge capacity to be retained as less upstream freeboard was needed.

Denys noted that the Tzaneen dam in Limpopo as well as the Hazelmere dam in KwaZulu-Natal had been earmarked as possible water infrastructure projects which could benefit from piano key weirs.

He added that at low overflow heads, the piano key weir acted very much like a linear weir, albeit with a much longer overflow length. It was at these low heads that the weir was capable of much higher specific discharge rates when compared with linear weirs of equal width. The main reason for this was that the approach velocity vector magnitude, both upstream of the weir as well as in the inlet key, was still low enough, such that it could readily change direction. In so doing, it could approach the upstream, downstream and lateral crests perpendicularly, thus maximising flow throughput.

“At slightly higher overflow heads, the momentum of the fluid flow associated with these vectors is so much so that their approach to the lateral crest deviates from the perpendicular. This results in reductions in discharge efficiency. At even higher heads, a flow separation occurs as flow enters the inlet key from below the upstream overhang. This separation boundary not only reduces the effective inflow area of the inlet key but also leads to the formation of vortices which periodically shed away from this boundary.”

He noted that, while piano key weirs were slowly gaining popularity, the investigation into the structural behaviour of the weirs remained unresearched.

“One research gap that was identified refers to the occurrence of negative pressures underneath the overflow nappe. Another gap is the occurrence of periodic vortex shedding caused by the separation of flow as water approaches and enters the inlet key of the structure,” Denys stated.

He, however, noted that a promising design feature has been proposed to counter the formation of this separation boundary.

“The placement of a suitably shaped nose under the upstream overhang guides flow into the inlet keys on either side. Its presence leads to smoother flow lines, lower energy losses and less vortex shedding which thus leads to increases in the piano key weir’s discharge efficiency,” Denys stated.

He noted that the continued research at Stellenbosch University was being undertaken to investigate the dynamic effects of fluid-structure interaction, with a special focus on flow-induced vibrations. The study encompassed both numerical and scaled physical modelling.

“To date, findings confirm the clear presence of flow separation vortices at the entrance of the inlet key together with the accompanying phenomena of vortex shedding.”