Venetia Underground on track to start production in 2021

Venetia Underground on track to start production in 2021 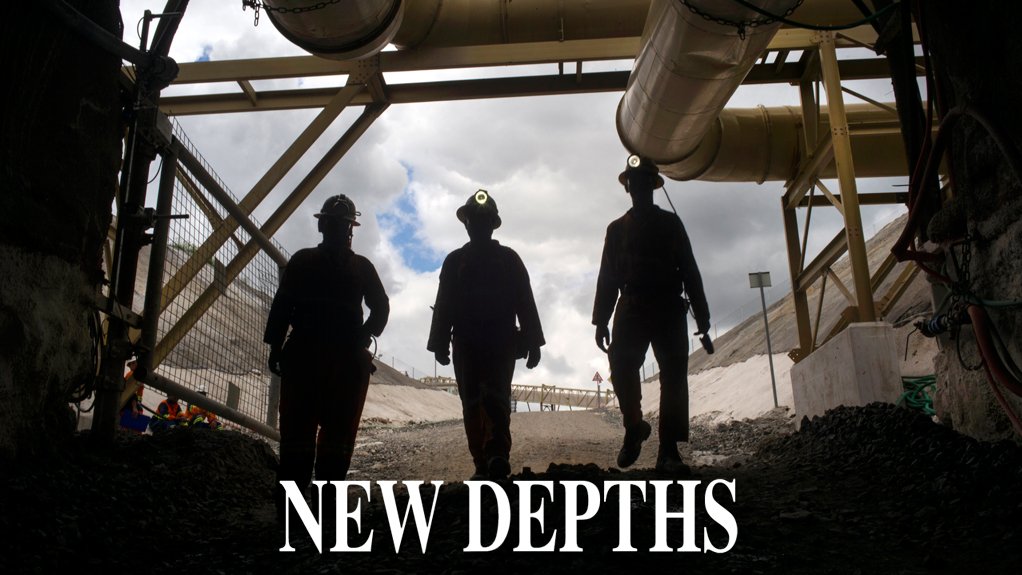 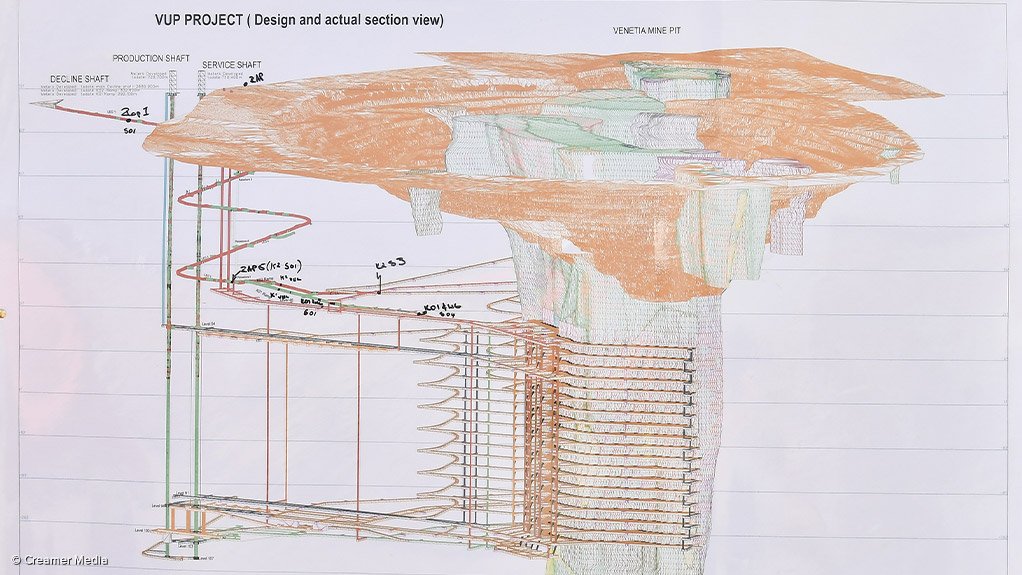 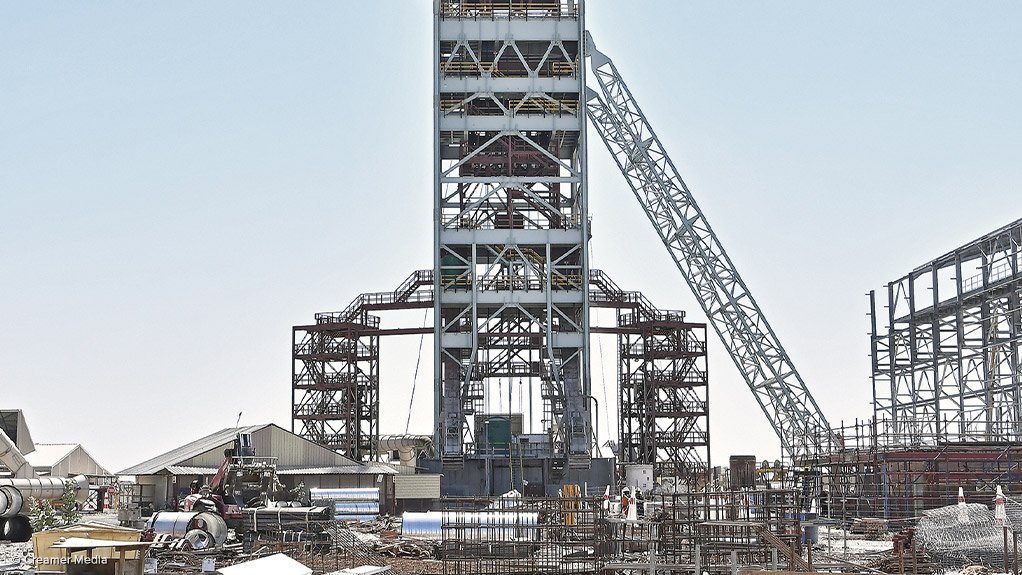 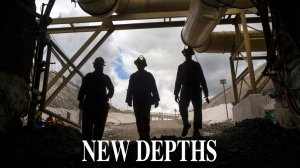 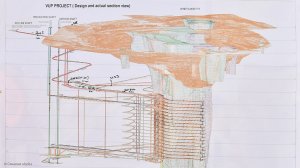 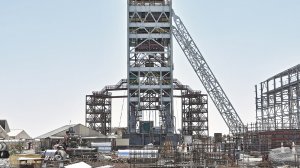 The $2-billion Venetia Diamond Mine Underground project remains on track and within budget to achieve first production in 2021. At steady-state production, 5.9-million tonnes of ore will be treated in the existing process plant to produce some 4.5-million carats a year.

Anglo American subsidiary De Beers Group hosted a Young Diamantaires Visit at the mine last month, providing the media and visitors with a tour of both the openpit operation and underground development.

The Venetia Underground project remains the largest investment spend for both De Beers Group and Anglo American in South Africa. Entering its sixth year of development, the project, once completed, will extend the life-of-mine to 2046.

The Venetia project comprises two orebodies – K1 and K2. Both kimberlites extend below surface, enabling De Beers to mine to depths of up to 1 000 m. There are indications that K2, in particular, extends well below 1 000 m, and De Beers may explore options that extend the underground operation’s life beyond 2046. The underground project will use sublevel caving to extract material, primarily from K2. However, De Beers has incorporated new design options to extract ore from the K1 underground orebody, necessitating the completion of a raisebore shaft and underground in-pit decline to better access both orebodies.

The openpit is expected to cease production in 2021.

By the September 4 visit, the production shaft had been sunk to 1 023 m. It is being fitted with loading boxes at 1 000 m, as well as its deepest end point.

Construction of the supporting surface infrastructure, including winders, change houses and lamp rooms, is also under way.

De Beers notes that a project of this magnitude comes with many challenges.

“One of the key challenges is competition for underground rapid development skills, both in our labour-sourcing regions and [across] South Africa, as these skills are sought after worldwide. Meanwhile, stakeholder engagement and management are also always an important focus with projects of this scale.”

The company stresses the importance of working with government and the community throughout the project to ensure that all stakeholders are engaged on the transition so that all parties can maximise the opportunities presented by the move.

“This requires forward planning from all parties, so it’s vital that we interact regularly.”

Additionally, the diamond miner notes that there is always a range of technical challenges involved with any underground mining operation, but that it has the required experience in managing such activities and contractors, which stands it in good stead.

De Beers notes that, over the past year, one of its primary challenges in South Africa has been the age of the deposits, adding that this has necessitated investment in a “leading asset” such as Venetia.

It points out that, as diamond deposits are getting older and becoming costlier to mine, and as very few new deposits are being identified, global diamond production has peaked and is now forecast to decline gradually over time.

“Consumer demand for diamond jewellery has continued to grow year-on-year, with the prospects for even greater demand growth in the coming years,” the company notes, pointing to the growth in middle-class households in countries such as China, as well as the rise in female self-purchase of diamonds “at a time when women are controlling more of the world’s income”.

The company also notes that Millennials and ‘Gen Z’ consumers already account for two-thirds of demand in the main diamond consumer markets, and believes that there are attractive fundamentals as long as it can access the supply to meet the growing demand.

Despite this expected long-term demand, De Beers has experienced some short-term headwinds, as reported by Mining Weekly in July.

Commenting on its interim results at the time, De Beers noted that, as a result of the headwinds, revenue was 17% lower year-on-year, while rough diamond sales declined by 21% year-on-year.

However, De Beers believes that the impacts of some challenges are likely to be short term, while it predicts a healthier industry outlook over the long term.

This belief is evident in the company’s commitment to continuing exploration activity in South Africa. “While we previously had challenges with the granting of exploration licences, following the introduction of Mining Charter III, we had 32 of our licences granted in the Northern Cape, Limpopo, the Free State and the North West provinces. This has enabled us to start exploring again for diamonds in the country.”

De Beers contracted Murray & Roberts Cementation (MRC) to sink the shafts for the underground project. The contractor used what is now known as the presink gantry.

“This was a challenge put to our very experienced and competent Murray & Roberts Cementation team of engineers. Not only were the challenges technical but the goal was also to fully comply with all health and safety regulations and mining legislation,” MRC project executive designate Japie du Plessis comments.

“From the outset, the team agreed to challenge the status quo at every opportunity and to focus not only on the hoisting system, but [also on] all the operations that are carried out during presink operations.”

Describing the conventional shaft presinking process, he explains that hand-held S25 rock drilling machines were traditionally used to drill a pattern of blast holes. Access to the shaft bottom is typically through the use of ladders until a depth of 25 m is achieved, after which the working platform, or stage, is introduced to the shaft operation.

This stage is normally suspended from beams on the bank level. Blasted rock is loaded into a kibble with a 5 t pneumatic rocker shovel. The loaded kibble is then hoisted out of the shaft with a crane, which is able to slew away from the shaft to allow the rock to be emptied into a dump truck.

The new presink gantry was deployed at the Venetia project and combines stage and kibble hoists and the blast cover handling operations into one rail-mounted gantry.

The stage is suspended from the gantry on steel wire ropes attached to two 8 t stage winders mounted on purpose-built platforms to the sides of the main girders in double fall.

Du Plessis explains that the gantry, which is physically connected to the blast cover, is then moved on its rails to the side of the shaft, rolling the blast cover into place over the shaft.

After blasting and clearing the shaft of the blast fumes by means of forced ventilation, the gantry is rolled back across the shaft. The fully equipped stage, which is automatically aligned and very accurately positioned through an integrated programmable logic controller, is then lowered to the required depth in the shaft.

The main hoist of the gantry, used for kibble hoisting and slinging, was custom-designed to enable a presink of up to 80 m below collar elevation. It is able to raise and lower a kibble with a 10 t payload at a conveyance speed of 0.5 m/s.

“Also incorporated into the gantry system is an automatic tipping frame. In the past, a man had to physically hook the lazy chain onto the kibble when it arrived at the surface to allow it to be emptied,” Du Plessis explains. “Now the kibble is slewed into its docking position where it is automatically positioned and hooked onto the frame. Then, by lowering the hoist, the bucket is tipped, discharging its 10 t load into a 20 t truck below.”

Since 200 t of rock needs to be excavated after every blast during presink, this streamlined loading system significantly reduces risk as well as the tipping cycle time.

As the presink gantry is rail-mounted, on completion of the first presink operation at Venetia, it was possible to transport the entire system on temporary rails to the position of the second shaft.

“For Venetia, we drove the whole setup, including the stage and the portal cranes, across to the new presink site at the mine. The setup stage for the second presink was completed inside of five days, a process that used to take us up to a month,” Du Plessis states.

Regarding the innovations for the presink stage itself, the company has also significantly improved safety and the effort required for drilling. “We have incorporated mechanised drilling systems underneath the presink stage. The system consists of six drill rigs supported on swivel arms suspended underneath the stage. Each operator guides the drill and manoeuvres it to match the pattern of holes required for the blast.”

De Beers Venetia Underground is expected to be a world-class operation, and, as a result, will be incorporating innovative and technologically advanced methods and systems to continue servicing the world’s diamond demand.