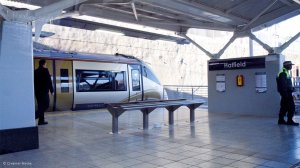 Pointing to a sustained increase in ridership figures that continues to place strain on the Gautrain’s limited capacity, Gauteng MEC for Roads and Transport Dr Ismail Vadi has outlined the business case behind the decision to embark on a R3.5-billion acquisition of additional rolling stock for the rail network.

This followed after the Bombela Concession Company (BCC) earlier this month invited established suppliers to qualify as shortlisted bidders by submitting a compliant request for qualification (RFQ) document for the design, manufacture, supply and maintenance of 12 new electrical multiple units, or train sets, as well as the design and construction of additional depot infrastructure for the Gautrain system.

To maximise value and local content, the maintenance of the new rolling stock had been included in the procurement, with bidders able to offer proposals for an up to 35-year maintenance contract.

Once the RFQ period closed on March 7, a number of companies would advance to the request for proposals phase, which would conclude by December.

Vadi explained during a RFQ information session, in Johannesburg, that the business case for the additional rolling stock was based on a self-funding mechanism, which would see additional revenue raised as a result of the increased capacity, as well as existing sources of funding within the current concession agreement with BCC, used to repay the associated debt.

The DBSA had approved, in principle, a loan of R3.5-billion that would be channelled into the GMA to pay for the new rolling stock.

Elaborating on the drivers behind the acquisition, Van der Merwe noted on Tuesday that the Gautrain system had, to date, transported over 50-million rail passengers and currently carried 1.4-million passengers a month.

“Since the start of operations, travel patterns and demand levels on the Gautrain system are closely and continuously monitored on an ongoing basis. Current passenger growth has been consistent in the peak periods and, if the current patronage in the peak periods is not addressed, capacity will become more constrained,” he said.

Van der Merwe added that 48 new rail cars would be required to support growing passenger numbers over the next ten years.

“Additional system requirements after 2020 will be evaluated and expanded in accordance with the outcomes of broader GPG initiatives, such as the Integrated Transport Management Plan,” said the province.

According to an independent assessment of the economic impact of the Gautrain, R46-billion had been added to the provincial gross domestic product as a result of property development induced by the network.

Van der Merwe, meanwhile, confirmed that the agency continued to progress feasibility studies related to the expansion of the Gautrain network across the province, with an update likely to be provided by April.