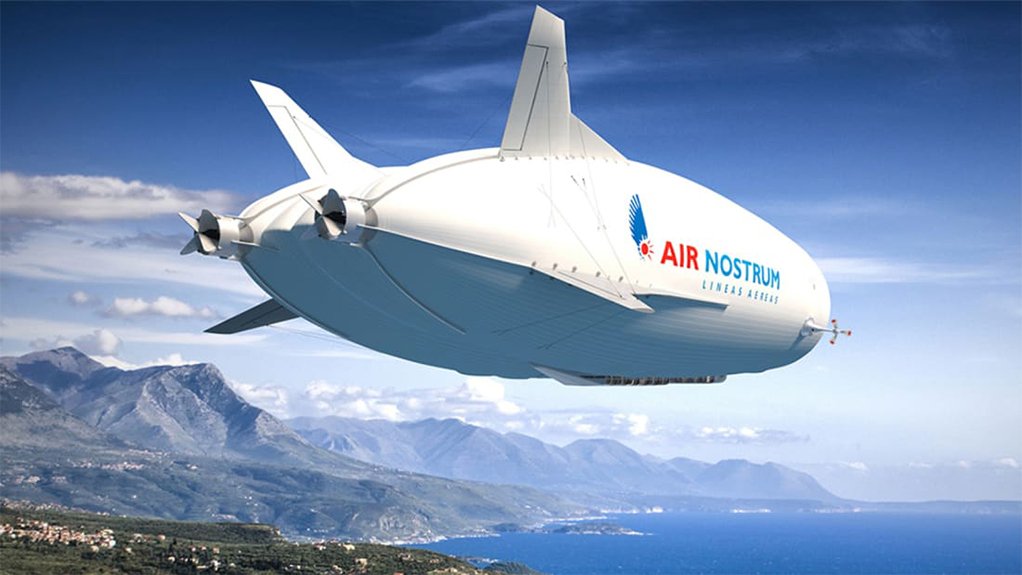 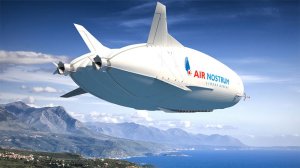 The Airlander looks like an airship but flies by using a combination of lighter-than-air, non-flammable, helium gas in its fuselage, vectored thrust propulsion and aerodynamic lift. The helium offsets most, but not all, of the aircraft’s weight, greatly reducing the amount of fuel that has to be burnt just to keep the aircraft flying. In a true airship, the gas (whether helium or hydrogen) offsets, and more, the weight of the fully loaded aircraft, so that it does not need aerodynamics or propulsion to keep it aloft. This fact, however, complicates landing.

The Airlander 10 will be able to seat 100 passengers (it has a maximum payload capacity of 10 t). It can reach an altitude of nearly 6 100 m (20 000 ft), have a range of 4 000 nautical miles, and stay airborne for up to five days. Fitted with four power plants, it has a top speed of 130 km/h. The Airlander 10 prototype first flew in 2012, but was severely damaged in an accident in late 2017 – it broke free of its mooring mast and an automatic safety system immediately deflated it, apparently causing it to break its back. It was not repaired, HAV deciding instead to concentrate on developing the production version.

Using four conventional internal combustion engines, the Airlander 10 would have 75% fewer carbon emissions than comparable conventional aircraft. With four hybrid-electric engines, this reduction would be 90%, and with all-electric propulsion, this reduction would be 100%. The company is currently developing a hybrid-electric propulsion system for the Airlander 10, which it hopes to make available in 2025. HAV further hopes that the all-electric option will be available and in service by 2030.

“Airlander is designed to deliver a better future for sustainable aviation services, enable new transport networks and provide rapid growth options for our customers,” affirmed HAV CEO Tom Grundy. “Our partnership with Air Nostrum Group, as the launch customer for Airlander 10, leads the way towards that future. As countries like France, Denmark, Norway, Spain and the UK begin to put in place ambitious mandates for the decarbonisation of domestic and short haul flight, Hybrid Air Vehicles and Air Nostrum Group are demonstrating how we can get there – and get there soon.”

“We are exploring each and every possible way to reduce our carbon footprint,” highlighted Air Nostrum president Carlos Bertomeu. “This is something that we have been doing for many years. The Airlander 10 will drastically reduce emissions and for that reason we have made this agreement with HAV. Sustainability, which is good news for everyone, is already a non-negotiable fact in the daily operations of commercial aviation. Agreements such as these are a very effective way to reach the de-carbonisation targets contemplated in the [European Union’s] Fit for 55 legislative initiative.”