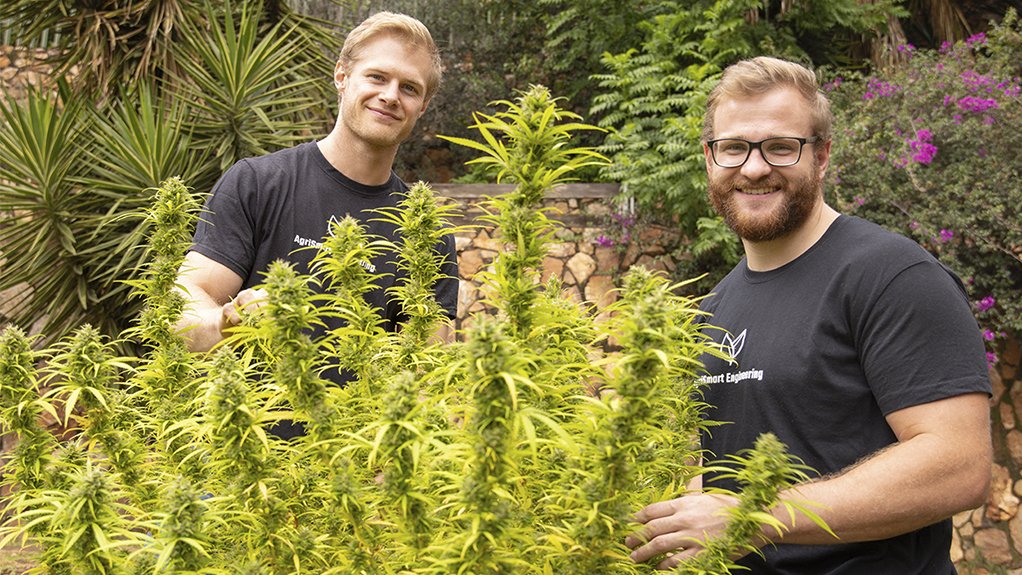 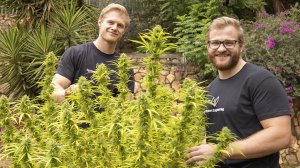 Two master’s students at the University of the Witwatersrand (Wits), Constant Beckerling and Anlo van Wyk, are developing new technologies aimed at disrupting the booming cannabis, or so called ‘green gold’, industry.

Their novel cannabis cultivation technologies, developed for the African climate, have earned them special recognition in the Biosciences category of the Gauteng Accelerator Programme (GAP).

The GAP is a yearly competition held by the Innovation Hub, a subsidiary of the Gauteng Development Agency, and is aimed at tech entrepreneurs who develop technologies that can benefit the Gauteng, South African and African economies.

The release issued by Wits on April 1 notes that “even though they are both passionate cannabis growers”, Beckerling and Van Wyk’s focus remains on developing agri-tech for the sector.

In order to do this, they created a startup called AgriSmart Engineering during the Covid-19 lockdown last year, with a focus on closed-loop hydroponics and aquaponics. The AgriSmart team specialises in the design and implementation of automated smart growing systems.

Beckerling and Van Wyk are approaching their speciality of cannabis cultivation as an engineering problem and marrying their growers experience and intuition with their engineering and technical backgrounds.

“There is a matrix of factors for cannabis cultivation that we consider. As an engineering startup we are developing cultivation technologies for the African climate. For cannabis cultivation, South Africa faces shortcomings such as water stress and irregular electricity supply at a high cost. But the country also has strengths such as superior solar radiation and being one of the first countries that is in the process of commercialising cannabis,” Beckerling explains.

To strike ‘green gold’ early, Beckerling and Van Wyk entered a blueprint for a cannabis cultivation research facility they designed in the GAP competition. Their entry also included two main agro-processing offerings, namely cannabis-specific light-emitting-diode (LED) grow lights in an automated Internet of Things (IoT) environment, customised for the research facility to accommodate the photobiology of the cannabis plants; and proprietary organic hydroponic nutrient, which they formulate based on the respective hormonal growth cycles of the plants.

“Our novel LED lighting is a technology which is set to disrupt the cannabis industry. This technology is brought about by combining one of South Africa’s unique strengths, which is solar radiation, with engineering disciplines like artificial intelligence, electronic and mechanical engineering,” says Van Wyk.

The current industry standard is to use High Intensity Discharge (HID) lighting.

“Our LED lighting tech runs 2.5 times more efficient on electricity than High Pressure Sodium (HPS) lights and even more so compared to Metal Halide (MH) fixtures. The lifetime of our LED fixtures is also significantly longer than that of HID lighting – about 15 times at the upper-end. This translates to about 80 000 hours of light compared to about 5 000 hours lifetime for the HID – leading to significantly lower maintenance costs,” explains Beckerling.

According to Van Wyk, the LED lighting fixtures are also dimmable.

“We could implement an artificial intelligence algorithm that takes in environmental input and based on those inputs it controls what the lighting output should be in that specific moment. This leads to optimisation of power consumption which brings down electricity costs.”

For the competition they had to do financial projections around their fixtures and the potential benefits of their disruptive tech. The bottom line is that over five years the cultivator stands to save R25-million a hectare in electricity costs just on the lighting alone, compared to industry standard HID fixtures.

The two engineers are also formulating their own organic hydroponic nutrients for cannabis.

“Besides electricity, your biggest running cost in your facility is going to be your nutrient cost which increases with scale. It’s therefore crucial to get the right nutrients that tailor to your plants’ specific hormonal growth phases,” says Beckerling.

“We are doing a cannabis-specific hydroponic nutrient that we formulate completely organically, and we are planning to register it as a type 2 organic fertilizer in line with the regulations of South African law,” Beckerling elaborates.

However, securing funding to develop and commercialise this nutrient, while producing it more than 10 times cheaper than the current direct market competition, is one of their biggest stumbling blocks.

Beckerling and Van Wyk’s next aim is to build a demonstration facility to show how their technologies are working on the ground.

“The current growing technology is very archaic, so if one party does decide to use this new tech, it will force the rest of the industry to follow suite if they want to compete on price,” Van Wyk says.

Beckerling adds: “We believe the market will settle at who can produce the most consistently at the cheapest price and at the highest quality.”

They estimate that many companies can spawn from this facility through the commercialisation of new technologies.

Biopark, a division of The Innovation Hub, recently offered AgriSmart a contract to help incubate the startup, which they accepted.