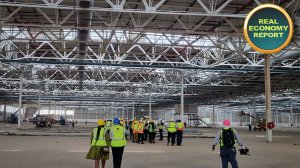 The Tshwane Automotive Special Economic Zone has been cited as a testament to how special economic zones in South African can be owned and operated, and lead economic development in a province. Marleny Arnoldi provides an update.

The Department of Trade, Industry and Competition (DTIC), together with the City of Tshwane and Gauteng provincial government, has spent R.185-billion on the SEZ’s development in the year-to-date, with DTIC’s contribution coming to R2.5-billion since its establishment.

The SEZ was launched by the President in November 2019 and has grown to already accommodating five component manufacturers even through Covid-19 challenges.

Gauteng economic development MEC Parks Tau gives his thoughts on the rapid development of the SEZ.

In terms of construction progress, about 75% of the Phase 1 top structure development has been completed and is expected to be done by March next year. So far, the zone has three phases of development envisioned.

The first phase is meant to accommodate nine suppliers, with later phases anticipated to include residential and retail components.

The SEZ will cover a total 204 ha of land and is driven by automotive manufacturing and suppliers of various vehicle components. For example, the anchor of the SEZ is Ford Motor Company South Africa, which has invested more than R15-billion on its Silverton assembly plant within the SEZ, to locally produce next-generation Ford Rangers from next year.

Of the total year-to-date spend, about R356-million has comprised procurement from small, medium-sized and microenterprises (SMMEs), with a further R639-million worth of contracts having been awarded to SMME operators.

The feasibility study conducted for the SEZ stipulated 45% as the target for SMME procurement spend.