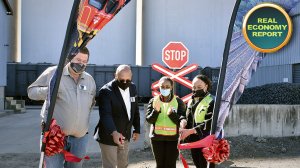 State-owned logistics company Transnet Freight Rail has increased its planned haulage of grain through the Bethlehem silo facility of VKB Agriculture by 133%, with 550 000 t of grains planned to be moved to South Africa’s ports for export. Creamer Media contributing editor Donna Slater tells us more.

Transnet launched its 2021 grain export season on May 17 at the Bethlehem facility where VKB shunts and loads grain wagons for collection by Transnet locomotives. The rail company is looking to expand its capacity, but is hindered by some factors. Transnet group CEO Portia Derby speaks to us about the challenges, this year’s grain export season and what Transnet is doing to increase is reliability.

Grain stakeholders also have a role to play in terms of getting their products ready for the export market. AgriSA executive director Christo van der Rheede tells us more.