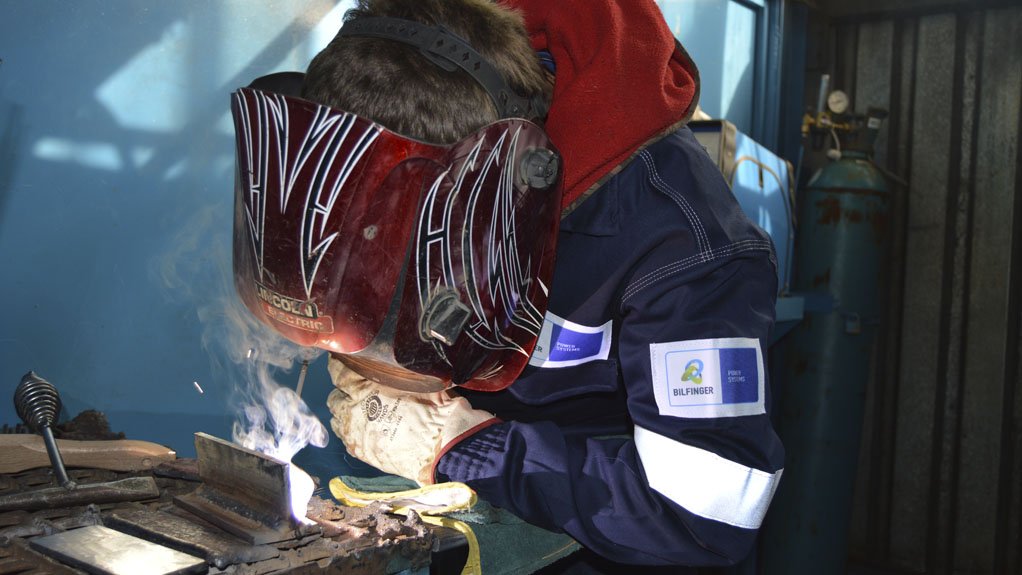 Engineering, manufacturing, construction and maintenance services provider Steinmüller Africa has registered its Technical Training Academy as a decentralised trade test centre, enabling the company to perform trade tests in the field of welding.

Pieterse says the academy’s biggest intake is for welding, which is Steinmüller’s core business. The academy is recognised by the Southern African Institute of Welding (SAIW) as a training provider and is authorised to present the International Welder course, which is also presented at its facilities in Bethal, in Mpumalanga, and Sebokeng, in the Vaal area of Gauteng.

These facilities are unique in that they have simulators that reproduce the challenging on-site conditions under which welding is likely to take place in real-world operations. “The simulator helps to familiarise the trainees with conditions on site, and the difficult positions in which they are often required to weld,” says Pieterse.

The benefits of such training are exemplified in the success of one of the academy’s welding trainees, Jacobus van Deventer, who has been invited to compete at the Beijing Arc Cup International Welding Competition from June 18 to June 23 this year, following his success last year at the WorldSkills competition in São Paulo, Brazil. He was also named SAIW’s Young Welder of the Year in 2014, which led to him being chosen for the Brazil competition last year.

At the Beijing Arc Cup, the competitors will be required to complete a number of basic skills tests, as well as demonstrate their welding abilities on more comprehensive welding projects. Van Deventer explains that the welds will be evaluated with regard to a number of elements, such as the penetration, profile, size and smoothness of the welds, further highlighting that adjudication at these events is very strict.

Young Welder Competition Changes Shape The SAIW’s biennial youth welding competition is undergoing an overhaul by organisers WorldSkills South Africa (SA), and as of this year will be known as the SAIW Youth Welding Challenge rather than The Young Welder of the Year.

Under the new system, the first stages of the competition will take the form of a countrywide series of regional competitions organised by the technical vocational education and training colleges and the further education and training colleges. From these regional competitions, 20 of the best performing young welders will participate in the SAIW Youth Welding Challenge over five days at the SAIW premises, in Johannesburg.

The top three candidates will then qualify for the WorldSkills SA national competition and the winner will represent South Africa in the welding section of the international WorldSkills competition.

“Because of the increased emphasis on regional skills development in the new competition structure, more young welders will have the opportunity to demonstrate their skills, which is excellent for the welding industry as a whole in South Africa. This will [also] inevitably increase the chances of South Africa performing better at the International WorldSkills competition,” says SAIW competition coordinator Etienne Nell.

All stages of the competition will continue to test the welders in the categories of carbon steel, stainless steel and aluminium, with the welding projects now based on the WorldSkills 2015 São Paolo project structure. The three winners of the SAIW Youth Welding Challenge and the winner and runner-up of the local WorldSkills SA competition will receive sponsored cash prizes.