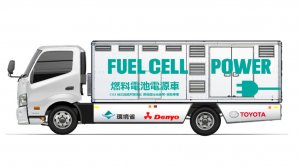 Japanese vehicle manufacturer Toyota Motor Corporation (Toyota) and Denyo have announced that they have jointly developed a fuel-cell power-supply vehicle.

Denyo, a manufacturer of mobile generators, will work with Toyota to start verification tests with the aim of commercialising the truck.

The project has been selected by Japan’s Ministry of the Environment as a low-carbon technology research and development programme.

Together, the two companies are investigating the possibility of electrified vehicles to act as large-scale power suppliers, delivering electricity when and where needed in a range of scenarios, including disaster-stricken areas without power, as well as entertainment venues such as outdoor concerts.

Many of the current generation of power-supply vehicles use diesel engines to provide power to the vehicles on the road and when generating electricity, which leads to the production of greenhouse gas emissions.

Fuel-cell power-supply vehicles, on the other hand, use zero-emission hydrogen fuel-cells to provide power.

These fuel cells allow for up to 72 hours of continuous power supply, while also providing water for showers as a by-product of power generation.

The Toyota/Denyo fuel-cell power-supply vehicle is based on Toyota’s Dyna light-duty truck and uses the fuel-cell system from Toyota’s Mirai fuel-cell electric car as its power source.

For its power supply unit, it uses fuel-cell power supply equipment developed by Denyo, under a programme subsidised by Japan’s Ministry of the Environment.

The test vehicle carries about 65 kg of hydrogen (in 27 hydrogen tanks), which allows for travelling long distances and generating power for long periods of time.

Verification tests for the vehicle started in September.

The truck will be compared against conventional engine-based power generators to verify the potential benefits of fuel-cell power-supply vehicles.