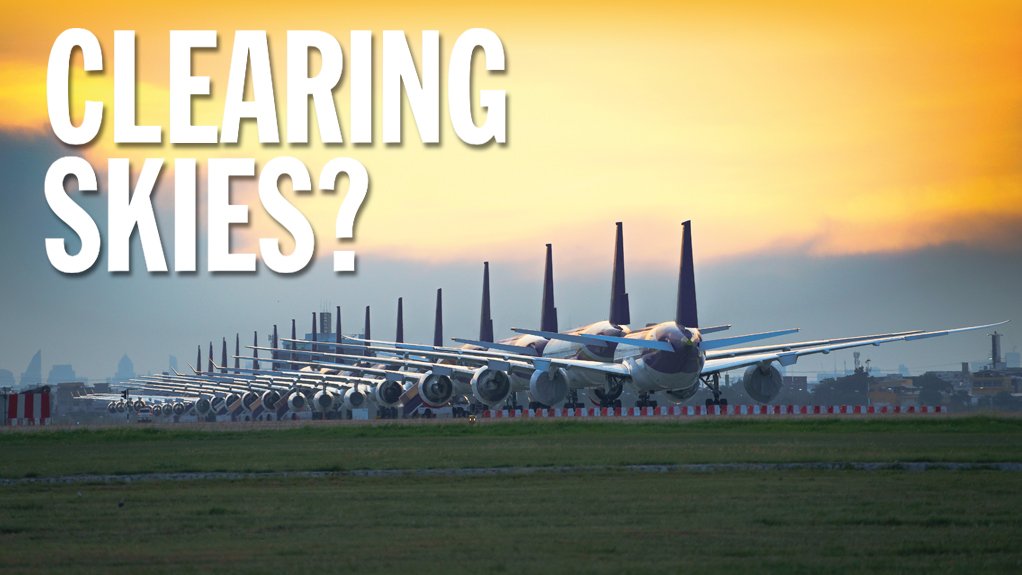 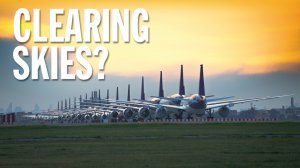 Around the world, light is now visible at the end of the Covid-19 pandemic tunnel (although the distance to the end of the tunnel varies greatly from country to country).

One of the economic sectors that will be most relieved by this is the airline sector, and not least its African, Southern African and South African members. Even before the pandemic hit, many of the continent’s airlines were in financially weak situations, in large part as a result of heavy government charges and taxes, but also because of restricted access to markets within Africa and low load factors.

In 2019, African airlines suffered a combined loss of $200-million, despite the continent’s economic growth.

“Passenger demand was down 69% in Africa last year, compared with 66% globally, with passenger revenues having dropped 68% in January-February, compared with the same period in 2019. The upshot was that African airlines lost close to $7.8-billion in revenue and posted a $2-billion combined net loss, or -$41.33 for every passenger they flew in 2020.”

African air connectivity collapsed. Before the pandemic hit, African airlines served 970 city pairs; at the start of May this year, only 100 were still being linked by scheduled air passenger flights, with most of these remaining city pair services being within the continent. Nearly every African airline had to take on more debt in attempts to cover fixed costs and stay liquid. Even so, some went under and others had to seek bankruptcy protection in order to reorganise their finances and cut their expenses.

There was one exception to this grim situation: air cargo.

“This was largely due to robust expansion on the Africa-Asia trade lanes,” he explained. “Positive as this may be, the improved cargo revenue comes nowhere near close to compensating for the slump in passenger travel and the combined seat and cargo capacity that was removed from the market with so many commercial airliners being mothballed and retired.”

What applied to Africa in general also applied to Southern Africa in particular. “Overall, the airline industry in the region was weak before the pandemic and the situation was compounded by Covid-19, which saw a slump in demand and a sudden evaporation of connectivity between markets with the announcement of the lockdown in March 2021 and the prohibition on air services,” pointed out Airlines Association of Southern Africa (AASA) CEO Chris Zweigenthal.

“The Southern African airline industry and market are much smaller now than they were before the pandemic.”

AASA covers the Southern African Development Community and Indian Ocean island countries, and within its area Air Namibia is being liquidated, Ethiopian Mozambique Airlines has stopped operating, while Air Mauritius is under the local equivalent of business rescue and is not operating. South Africa’s Comair group, which operates the British Airways in South Africa and Kulula low cost carrier brands, was forced into business rescue, but has exited this and is operating again. These developments were all caused by the pandemic.

South African State-owned national flag carrier South African Airways (SAA) went into business rescue before Covid-19 hit, as did the country’s also State-owned regional airline, SA Express. But the pandemic gravely exacerbated their situations. SA Express is now in provisional liquidation. SAA, although it has officially exited business rescue, is still not operating. And low-cost carrier Mango, part of the SAA group, which never went into business rescue, is finding it difficult to maintain its operations.

While other airlines in South and Southern Africa stayed solvent and resumed operations the minute they were allowed to, they have to be seen more as survivors than as winners. “Nobody has gained from this pandemic or the accompanying economic crisis,” affirmed South Africa-based aviation consultant Linden Birns. “Thousands of jobs – many of them skilled – have been lost, along with the livelihoods they supported. Some airlines and their suppliers and service providers have been able to respond with greater agility than others. Those with robust balance sheets have been able to leverage sufficient finance to tide them over what has been the worst slump since World War Two.”

A turning point has been reached and passed in the struggle against the pandemic, with vaccines against Covid-19 being rolled out around the world, including in Africa, although at very different rates. Thus, according to the “Our World in Data” website, citing official figures, as of the end of last month or the beginning of this month, Morocco had administered 14.41-million vaccine doses, Egypt (which had once lagged badly in this regard) had administered 2.59-million, while the figure for Nigeria was 2.03-million, for Ethiopia it was 1.81-million, for Ghana 1.23-million, with South Africa still lagging with a figure of 1.05-million. (South Africa had, however, overtaken Kenya, where the number was 969 692.) But, as far as the continent’s airlines are concerned, it is still too early to celebrate.

“Even though the broader economic position is brightening around the world and especially for resource-rich emerging economies in Africa, the continent’s airlines are still in a very precarious position,” cautioned Alwadhi.

“Passenger traffic demand is still suppressed thanks to the slow roll-out of the vaccination programmes, the high cost of Covid-19 polymerase chain reaction tests and mandatory quarantine requirements in some countries. The situation is compounded by the inconsistencies that have stemmed from unilateral measures by countries such as the UK and the US, with their lists of variously restricted countries. All of these continue to deter travel and act as a handbrake, not just on the recovery of Africa’s airlines, but of the economies they serve and on the creation of job opportunities and livelihoods that would otherwise benefit from a better-functioning air transport network in Africa.”

“While some regional connectivity has been restored, the number of connections further afield in Africa and beyond has also fallen significantly. Unfortunately, many regional airlines are having to adjust their schedules to respond to government directives not to operate due to increases in Covid-19 infections in destination States,” reported Zweigenthal.

“Domestic markets in Southern Africa are recovering, but there is a long way to go. In South Africa some of the local carriers that are flying are now operating up to 80% of their prepandemic capacity, but some are still struggling to restore capacity. In many cases flights are operating at high load factors, and others at low factors due to the uncertainty and hesitancy of passengers to travel and changing travel patterns. Airlines are flexible in assessing their schedules to increase load factors. While capacity and load factors describe supply and demand, they do not reflect profitability – the margins are very thin. The market is weak, with very little elasticity in terms of fares.”

Iata research has established that total air passenger traffic during the first quarter of this year was 70% down on the same period in 2019 (before the pandemic). Despite the recovery in domestic traffic within African countries and on some intra-African travel, the association does not expect long-haul traffic to and from Africa to return to 2019 levels until 2023/24. AASA notes that the recovery in long-haul traffic to and from Southern Africa in particular “will take some time” and depends heavily on the roll-out of vaccinations across the region and especially in South Africa.

“Right now, the region’s commercial air travel and allied industries are being held back – and our region’s economic recovery is being impeded – by the slow pace of the vaccination roll-out in South Africa,” highlighted Birns. “Government needs to work with the private sector to rapidly pick up the pace of vaccinations so that South Africa is removed from other countries’ ‘red lists’. This will enable unhindered international business, leisure and private travel.”

Governments could also provide more direct help to their still-struggling commercial aviation and the allied travel and tourism sectors, which sustain so many direct jobs, and so many more indirect jobs, across South Africa, the region and the continent. “For economies to benefit from the connectivity that air travel provides, governments need to provide financial relief to the entire air travel and tourism sector,” averred Zweigenthal. “They could start by eliminating statutory charges and shredding red tape but could also instil confidence and certainty by implementing globally standardised and harmonised biosecurity measures for air travel and tourism, including affordable Covid-19 testing and vaccinations instead of arbitrary quarantines and other expensive deterrents.”

“Iata has secured $32-billion in pledges from international financial and donor institutions, to be used as relief across our allied industries, but hardly any of it has reached the intended beneficiaries,” emphasised Alwadhi.

“Governments and those contributing entities now need to remove any red tape and uncork the bottle so that the funds can flow before further unnecessary harm is caused. At the same time, we are seeing some governments providing financial support selectively when the entire sector requires support – regardless of ownership. The commercial air transport industry should be regarded as a prized strategic economic catalyst, but this requires big-picture holistic thinking, not protectionism.”

Such support measures would not significantly increase the fiscal pressures from which many African governments currently suffer. On the other hand, they would stimulate economies, save or restore jobs and so restore these countries’ tax bases, leading to an easing of these fiscal pressures. What would also stimulate economies across the continent, and not involve any fiscal burdens on governments, would be the accelerated implementation of the Single African Air Transport Market. Eliminating barriers to African airlines operating between African countries would greatly stimulate the sector and the continent’s economies.

“The fundamental drivers for air transport in Africa remain in place; that is rapid population expansion and urbanisation,” assured Zweigenthal.

“These continue to present challenges to the governments which house, feed, provide education, healthcare, peace, security and sustainable work opportunities for all these people. The easiest way to achieve these is by opening markets and encouraging trade and tourism.”