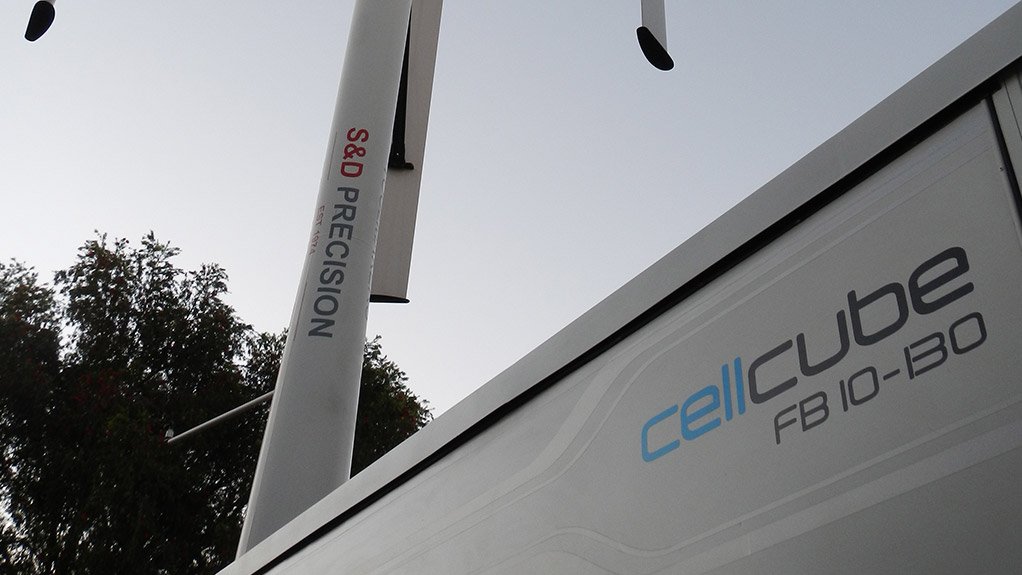 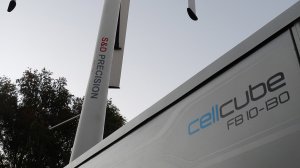 Gildermeister Energy Solutions sales manager Andreas Feichtinger says that, in addition to mitigating production losses because of unexpected powercuts and load-shedding, the CellCube helps manage load and production peaks, ensuring that companies can buy electricity when it is cheaper – such as during off-peak times – and discharge the energy when electricity costs are high.

“The CellCube’s vanadium battery can be discharged and recharged up to 20 000 times without much loss in performance,” he says, adding that the system’s expected life span exceeds 20 years.

The battery discharges when the liquids are set in motion through pumps, and flow past each other – separated by an ion-conducting membrane – to create an electrochemical reaction.

Since vanadium flow batteries only use vanadium, there is no cross-contamination between liquids and, therefore, the batteries last longer.

Feichtinger adds that, with lithium-ion batteries, more cells would have to be added to increase storage capacity, while vanadium batteries need only more vanadium electrolyte, for example, the positive/negatively charged fluid that stores energy.

The CellCube is a tamper-proof, integrated system solution that uses specially inverted adapters, which enables the unit to access various energy sources.

Feichtinger boasts that the CellCube can be used as a grid support system by stabilising low-voltage systems as a standby, uninterrupted power supply (UPS) system, and as a buffer at wind and solar parks, stabilising energy fluctuations caused by weather changes.

The FB 10-130 model, as installed at the premises of S&D, has an output of 10 kW and a storage capacity of 130 kWh. At S&D, the cube has been combined with a 90 kW photovoltaic system – with 20 kW consistently routed to the CellCube – and a 10 kW wind turbine. Installation and integration took about four days.

S&D has kept its 300 kVA diesel genset, because, while the CellCube acts as a UPS system, Feichtinger notes that this model’s limited capacity enables it to only back up critical loads. He adds, however, that S&D could easily scale up.

“System performance is easily scaled, as two CellCubes produce a combined 20 kW, with a capacity of 80 kWh, while three produce 30 kW with a combined storage capacity of 120 kWh.”

There are 14 CellCube models available, starting with the smallest unit, the FB 10-40, up to the largest, the FB 200-1600, which is installed at the Pellworm municipality’s photovoltaic park, in Germany. In general, the CellCube models can provide autonomy at full discharge power of up to 12 hours, depending on the different models.

Gildermeister Energy Solutions is a subsidiary of German mechanical engineering company DMG MORI and considers itself to be a leading machine tools and controls manufacturer.

S&D Precision Toolmakers, established in 1974, supplies the petrochemicals, and mining industries with high-precision components, such as tooling, dies, jigs, impellers and gears. It exports to the US, Germany, Italy, Australia and Japan.