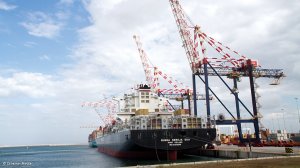 “Not only is this project the largest single order for the MoorMaster technology, to date, it is the first order in Africa. The scale and location of this order represents a tremendous opportunity for the group. It also further demonstrates that the technology continues to gain traction in the market,” said Cavotec CEO Ottonel Popesco.

“In terms of the tender, Cavotec will train local technicians to provide the technical support following [the] delivery of the units. The company will also commission an independent engineering study, using computer modelling of the berth, to make recommendations on the technical details and performance targets of the application,” noted TNPA CEO Tau Morwe.

He explained that the Port of Ngqura experienced significant long wave effects and high winds, especially during winter, causing excessive movement in the ships along the quay wall, interfering with crane operations. As a result, there was a lot of downtime in cargo operations affecting the terminal’s efficiency targets.

“Depending on a number of factors, such as vessel size, wavelength and wind speed, the automated mooring units are expected to dampen vessel motion by as much as 75%. This reduces ship movement, as well as enables faster mooring or release of vessels, which is expected to drive up the efficiency at the Port of Ngqura,” explained Morwe.

The technology was not one that could be “bought off the shelf”; it needed to be built to TNPA’s specifications. Therefore, the first of the units would arrive within the next 12 months and it was expected that, by 2015, the first terminal would be fully automated.

“This system will help ensure that the Ngqura Container Terminal, which, in terms of throughput, is acknowledged by Drewry Maritime Research as the world’s fastest-growing terminal, continues to grow as an increasingly attractive destination for shippers,” said Port of Ngqura port manager Mpumi Dweba.

She noted that the value that TNPA invested in this project was a clear indication that the organisation was serious about dealing with the environmentally caused inefficiencies at the port.

The MoorMaster technology was increasingly gaining acceptance in the global maritime sector and was currently in operation at bulk and container handling, roll-on/roll-off ships, passenger ferry and lock applications in North America, Europe and Australasia.