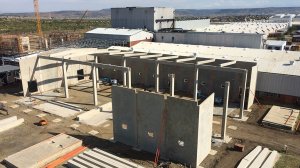 In November 2013, Sumitomo Rubber South Africa (SRSA) embarked on the project, which expanded its factory space by 2 600 m2. The concrete structure was completed in April.

The SRSA factory uses rubber vulcanising to manufacture tyres and, therefore, any associated buildings require a two-hour fire rating, owing to the high temperatures involved with the manufacture of tyres. Therefore, concrete was chosen for the columns, panels and roof beams of the extension.

Tilting It Up The tilt-up construction method involves structural elements, such as large columns, being constructed on site and flat on the ground. “The process is quick and simple,” explains Bedrock Group GM David Kitching.

Concrete casting beds are placed horizontally, with the formwork being set on the casting beds, which have been coated with a bond-breaking layer. Following this, rebar is fixed in the formwork and special lifting inserts are attached. The concrete is then poured into moulds, vibrated to eliminate air bubbles and the surface is power-floated to a steel float finish.

For the SRSA project, the concrete components required a curing period of seven days. However, he says that, in most instances, lifting and tilting of the components can be done within four or five days after the concrete has been poured.

Kitching adds that using the tilt-up method on SRSA’s expansion reduced construction time by about two months, with all the precast columns erected in a day. The 32 wall panels and 43 beams were erected over five days, with the largest of the panels weighing 38 t.

Once the concrete of the column bases was poured and cured, the panels which had been previously cast and cured were erected and braced in place until the precast beams had been placed and the wall panels secured to the beams using angle cleats and mechanical wedge anchors, thereby stabilising the structure. The braces were then removed. The column bases measured 2 m × 3 m × 600 mm.

Meanwhile, Kitching notes that a major advantage of tilt-up construction is the ease and accuracy at which openings can be made for windows or doors, resulting in easier retrofitting by other contractors and less waste material.

“Bedrock Group actively promotes the use of tilt-up construction to clients, professionals and construction companies,” he says, adding that it is the group’s goal to see all large-envelope buildings, such as warehouses, distribution centres, factories and shopping malls, being built using the technique.

However, Kitching notes that, should uptake in the method increase significantly – which he believes will be the case – it would result in “far more work” than the company could handle. “We are teaching other contractors to do the precast construction, while Bedrock consults on lifting designs, casting bed layouts and crane positions, therefore making tilt-up construction more accessible to contractors,” he says.

Bedrock Group also provides rigging teams to conduct the rigging, lifting and erection aspects that most contractors are wary about, says Kitching.

“It is through this combined approach that tilt-up construction will become the norm,” he concludes.