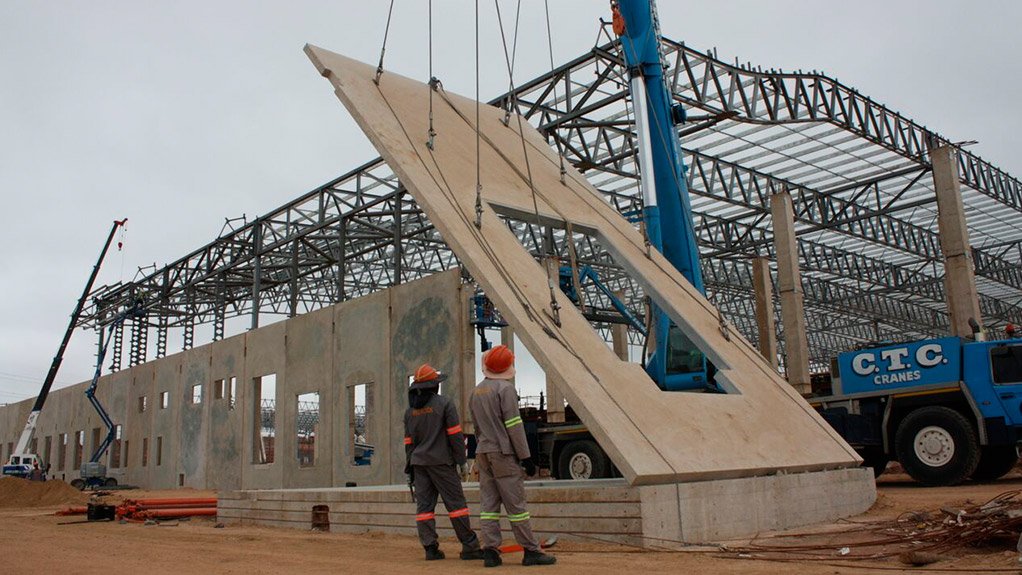 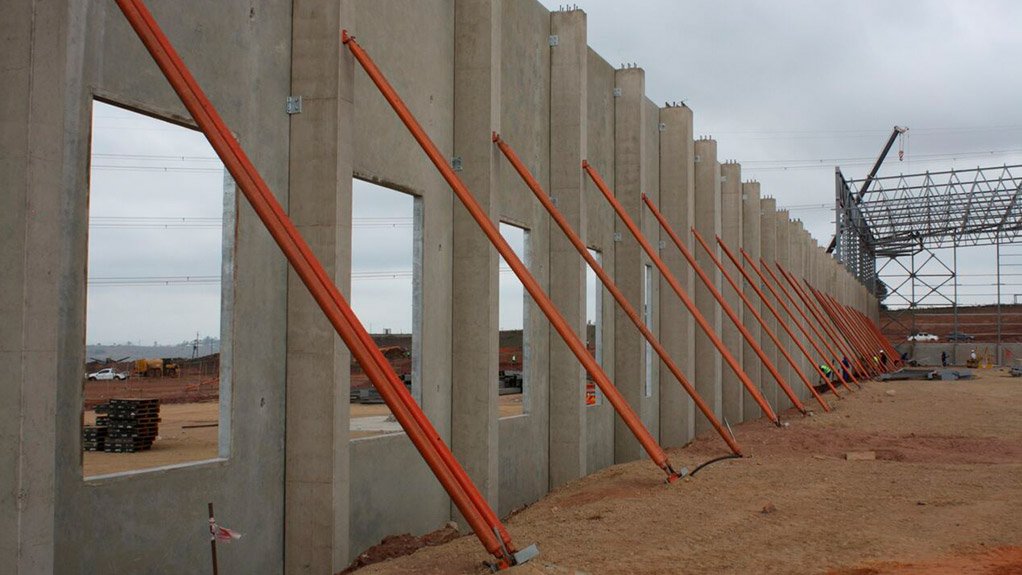 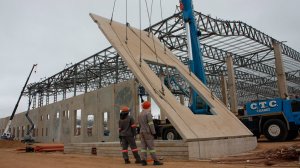 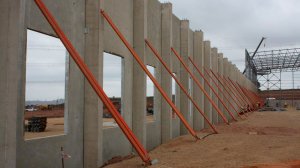 Bedrock Group is using the tilt-up construction method, with construction on the 56 000 m2 facility having started in June. Future expansion possibilities can result in a centre of about 90 000 m2.

Bedrock Group GM David Kitching tells Engineering News that within three days of being on site, the Bedrock Group team was already pouring concrete into the casting beds to make the large tilt-up panels.

“Tilt-up is a precast building method that is well suited to constructing the columns and walls of buildings. It involves precasting the concrete elements at the construction site within the radius of a crane – to facilitate easy lifting,” he explains.

This requires relatively small teams and, for the Mr Price project, Bedrock Group employed two groups comprising 12 personnel each, who worked at different areas of the building to accomplish their goal within a “very tight programme”.

About 160 wall panels will be cast and erected to form 6 000 m2 of wall. “Many of the wall elements are 10 m high and 5 m wide, and are installed as a single element,” says Kitching, adding that, when lifting starts, vast areas of wall can be erected in a day. He notes that 20 panels a day have been achieved, which equates to about 1 000 m2 a day.

Kitching adds that manufacturing the tilt-up elements entails careful planning. He notes that the crane position must be monitored and accounted for when casting the elements. “This is crucial for tilt-up construction for safety reasons and to ensure profitable work flow,” he says, adding that a miscalculation can result in costly additional rental of cranes, owing to extended working hours.

Concrete is then poured into casting beds, power-floated to a smooth finish and allowed to cure. Once cured, the Bedrock Group teams set specialised formwork to the shape of the wall, including any door or window openings.

A layer of bond-breaking fluid is applied to the casting bed to prevent the concrete wall from adhering to the bed. This is followed by the placement of reinforcing steel in the formwork, after which more concrete is poured. The top face of the element is again power-floated to a smooth finish, and formwork is removed the following day, with the process starting again for more tilt-up elements. New panels are placed on previously cast panels, resulting in stacks of walls up to six panels high.

“We continued with this process for six weeks,” says Kitching, explaining that Bedrock Group first produced 75 wall panels, after which lifting, or the tilt-up method, could get under way. Bedrock Group used a 160 t crane to lift 62 panels over a three days, which were subsequently bolted to concrete columns. A crane was commissioned five weeks later to install another 60 panels. The final lift of remaining panels was completed mid-October.

Versatile Method Kitching tells Engineering News that the tilt-up method involves building elements according to the projects engineer’s drawings, “so the building method is always tailored to the requirements of the project”.

He adds that this makes the tilt-up method versatile and adaptable, resulting in the method rapidly becoming the “first choice” for many projects.

Kitching reveals that Bedrock Group is casting a special feature panel for the entrance area of the Mr Price building, which will feature an embossed Mr Price logo.

The main benefits of the tilt-up method for the Mr Price project include an accelerated build programme, improved safety at the construction site and cost savings.

In terms of functionality, Kitching says the reinforced concrete walls are strong and resilient to bumps and scrapes by trucks and forklifts, which are inevitable at a busy distribution centre. “The walls also serve to retain the raised floor inside the warehouse, which is typically 1.35 m higher than the outside hardstand.”

Bedrock Group’s scope of work is on schedule and due for completion next month, with the remaining work being finalised by the main contractor Stefanutti Stocks Building KZN and other subcontractors.