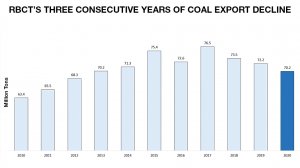 JOHANNESBURG (miningweekly.com) – Coal exports from South Africa’s Richards Bay Coal Terminal (RBCT) last year declined for the third consecutive year, with the 70.2-million tons exported to mainly Asia and single-digit percentages to Africa and Europe, taking exports back to what they were in 2013.

The record level of 76.5 Mt set in 2017 still stands, but RBCT is hoping to beat it this year, and has retained the 77 Mt target for 2021, against the background of coal exports to China beginning to arise.

“We did get a surprise this year when we started to see some exports going to China. We’re looking very positively into that, and looking into what it means for the future,” RBCT chairperson Nosipho Siwisa-Damasane noted during RBCT’s virtual media conference, in which Mining Weekly participated. (Also watch attached Creamer Media video.)

RBCT is not in the business of selling coal, but has noted the first coal leaving South Africa for China since 2014, with roughly 654 000 t of coal exported to the Asian giant in 2020.

“I understand there have been some vessels that have gone in January to China and it does seem that it is an opportunity for South African coal,” RBCT CEO Alan Waller stated.

Coal buyers have interacted with SGS, RBCT’s on-site laboratory service provider, to understand sampling methodologies that would need to be met should parties want to export coal to China.

In 2020, 92% of South African coal went to Asia, with India and Pakistan being the biggest takers; 5% went to Africa and 3% to Europe. Africa is down about 1% from last year.

The private-sector-owned terminal continues to work very closely with the State-owned Transnet Freight Rail (TFR) and Transnet National Ports Authority (TNPA), which continues to bode well, the Covid-19 pandemic notwithstanding.

“We actually run a seamless supply chain,” said Siwisa-Damasane in praising both TFR and TNPA for the collaboration RBCT receives.

South32’s transaction with Seriti, which is close to finalisation, does not impact RBCT as a terminal.

“Our shareholder pretty much remains the same, although its name will change. But it’s normal operations from that point of view,” said Waller.

“The Anglo transaction and its divestment process is at an early stage. Again there, we don't anticipate any changes or challenges to the RBCT structure in terms of the way the organisation works. All of those transactions are dealt with in terms of our shareholders’ agreement.

"RBCT does have engagement sessions with them on a regular basis to understand and to answer questions and clarify certain issues and we’re still awaiting a formal approach from them to the RBCT board, but that transaction is at quite an advanced stage, so we certainly expect something to happen pretty soon in that regard.

“So, again, that process would appear to be getting to the end. Just to note, the Optimal Coal Terminal plan has not been issued and on the basis of that, RBCT is not really in a position to express an opinion as to where we are in terms of that transaction. No formal approach has been made to the RBCT board at this stage in terms of that transaction, but at least there appear to be positive developments in that regard,” Waller added.