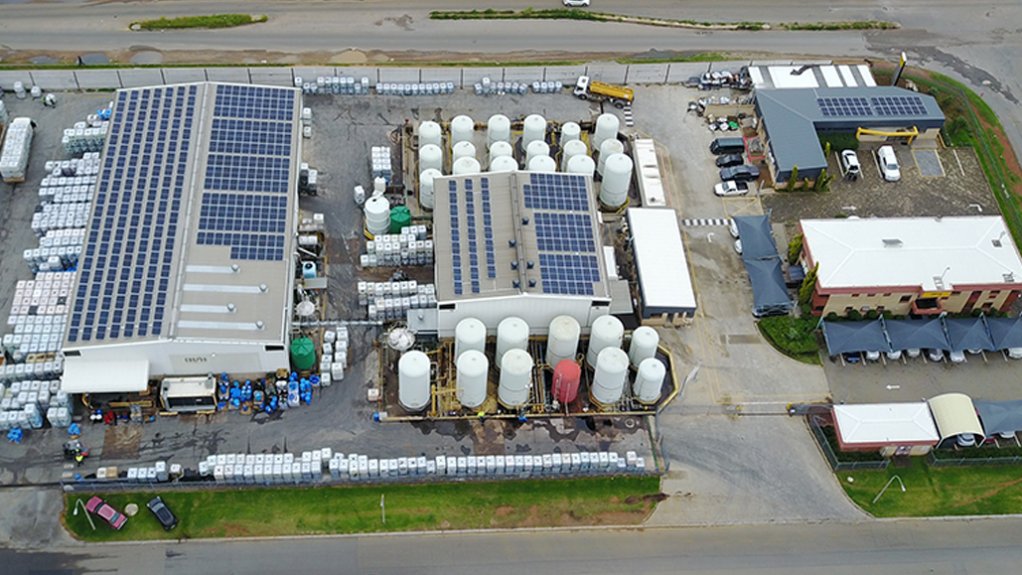 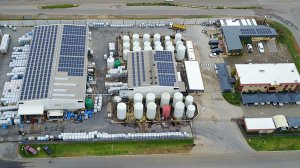 The installation was completed in January and consists of 393 solar panels with a capacity of 400 W each. The panels can collectively generate 157 kWp through five 27.6 K inverters.

CHRYSO Southern Africa CEO Norman Seymore tells Engineering News that the estimated yearly energy output of the system is 239.13 MWh, providing about 70% of the company’s historical energy requirement. The remaining 30% will continue to be sourced from the grid.

Previously, the company implemented a series of wastewater treatment systems to recycle and, thereby, reduce the amount of wastewater produced at the plant. Several wastewater catchment areas were also constructed to ensure that wastewater is treated to an acceptable standard before being discharged.

Seymore explains that these measures are not strictly mandated according to municipal or government regulations, but CHRYSO Southern Africa has implemented them in accordance with the company’s global efforts to contribute to a more sustainable construction sector.

“We are also aiming to ensure that our packaging materials and containers are recyclable and reusable. We deliver much of our products in bulk, but where we deliver 1 000 𝓵 containers or 200 𝓵 drums, for example, we make use of recyclable materials,” he says.

Seymore says the company’s efforts to reduce its manufacturing footprint is tied to its chemicals additive product offering, which supports the construction industry’s demand for sustainable construction materials.

For example, the company’s newly patented Innovative Cement Activation and Rheology Enhancement (ICare) strength enhancement technology is designed with this in mind. The ICare technology is being subjected to several long-term trials in South Africa.

“Covid-19 delayed the rollout of the ICare product on a large scale, but the interest in the product has been significant. We believe the penetration of the product into the market will accelerate quickly,” Seymore says.

The technology provides extra activation for cements manufactured from challenging process (CP) configurations and in vertical roller mills (VRMs), which are specific processes where the performance of conventional strength enhancers is limited.

Seymore explains that the ICare technology empowers cement reactivity by creating a synergistic effect between chemical and mechanical activation to further increase cement strength at all ages while optimising the clinker factor.

As such, the technology has been developed into two ranges – the ICare CP and the ICare VRM.

“Using conventional high-performance strength enhancers can lead to process limitations. These side effects are often controlled by reducing the dosing rate of cement additive. However, this leads to a lack of grinding aid in cement to achieve all the benefits from the chemicals,” explained CHRYSO cement technical director Laurent Guillot in a statement issued in September last year.

He said such limitations were further emphasised with strength enhancers that were used for their combined properties as process improvers and chemical activators to boost cement strengths.

“In such a situation, the appropriate balance between process sensitivity – especially with process differential pressures – and cement reactivity can be difficult, if not impossible, to achieve,” he added.

The ICare VRM product allows for the full optimisation of mill stability by reducing pressure changes and vibrations in the process.

Moreover, it causes an improvement of cement reactivity by reducing water injection while causing an overall increase of cement compressive strengths at all ages to significantly reduce the clinker factor.

He adds that there is an increasingly strong influence from consulting engineers and architects towards more sustainable construction; “therefore, we are seeing a growing market for our chemical additive products, which allow for cement and concrete to be more sustainable”.

Seymore explains that, at different stages of the ball mill process, a significant increase in productivity is achieved.

Using chemical additives actually reduces the cost of cement – despite the additive being an additional input cost – because it enables manufacturers to use less cementitious material to achieve the desired strength or performance, Seymore concludes.