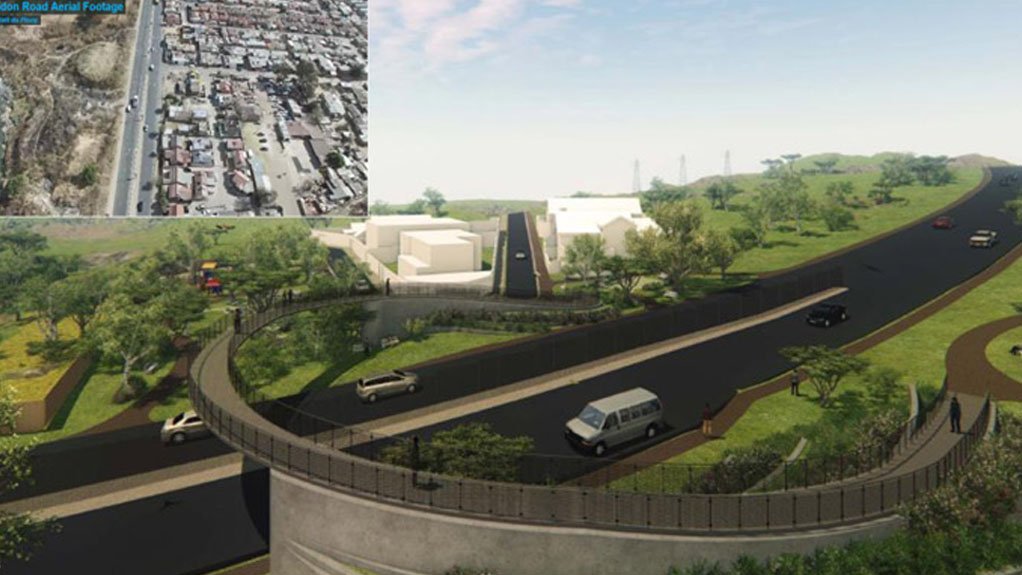 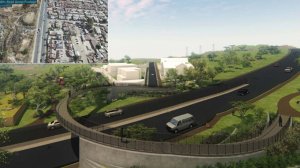 The iReport is an innovative combination of a number of tools and software programmes, ranging from animation to Internet browsing and text editing, brought together into an integrated, multistakeholder system. By displaying project information visually on a digital platform, it allows information to be reported and shared more widely. “The iReport complements our strategic advisory to help cut through the complexity in large multi-stakeholder projects. By moving from analogue to digital reporting, we help make project reports more accessible to all the stakeholders involved so that decisions are better understood,” says Royal HaskoningDHV Netherlands transport and planning business unit director Frank Legters.

Johannesburg Development Agency (JDA) commissioned the project last year, which entailed the construction of a horseshoe-type pedestrian bridge, in conjunction with the upgrade of the surrounding public open spaces next to the Jukskei river.

Royal HaskoningDHV South Africa transport and planning associate director Malcolm Roods outlines to Engineering News the company’s role in the project: “We were appointed in October last year to conduct an environmental legislative screening for the bridge, which included surveying components such as the environmental-impact regulations and the National Water Act.

“Having studied all the complex requirements, we soon realised that it would take a lengthy report of hundreds of pages to communicate all this legislative information to the necessary stakeholders. And that’s where the iReport stepped in.”

Through interactive data on the digital iReport platform covering elements such as visuals, geographic information system (GIS) mapping and drone footage, Royal HaskoningDHV was able to communicate clearly all the pertinent information to the project’s stakeholders. Roods believes that this allowed for more informed and efficient project decision-making.

A clear marker of success is that the link to the digital report was opened over 750 times. “For much larger projects, typically we would have between 20 and 30 people attending a public meeting, so it was notable that this project was made more accessible by the iReport as it was viewed by such a large audience. We are certain that we would not have reached so many people using conventional methods. Thanks to the iReport, many more people could become involved,” said Roods.

By creating this level of awareness among the project’s stakeholders, transparency was achieved – which Legters agrees was one of the main objectives behind the iReport. “It meant that right from inception, the project and JDA’s objectives were understood by all those who viewed the scheme, which is critical to achieving the best end results.”

Roods says the JDA was delighted with the execution of the iReport for the new bridge, with JDA development implementation executive manager Siyabonga Genu saying, “The iReport makes project management more accessible and the links on the report enable easier access to information. It’s definitely something that we will implement in our subsequent projects.”

Moreover, Roods emphasises the importance of being digitally savvy as the company moves into the new digital age in its industry. At Royal HaskoningDHV, the company is investing in its employees through initiatives such as staff and knowledge exchanges between the Netherlands and South Africa, to ensure that its employees are at the forefront of digital developments like the iReport, in order to bring new innovations and to continue to create value for its clients and partners alike. “It is imperative that we continue to push the frontiers of digitalisation and herald in a new era of growth together with our clients.”

Development of the iReport began in 2016, with the first report delivered by Royal HaskoningDHV in March this year. The technology was developed at the group’s head offices, in Amersfoort, Netherlands, and its pilot project – an environmental impact assessment for a dyke – was also conducted there.

The iReport was borne out of company’s growing focus on innovation, digitalisation and smart solutions to deliver its world-wide portfolio of engineering solutions across all business lines more effectively. With today’s Internet generation, clients want quick and accessible information, transparent and fast decision-making, and solutions such as iReport can transform these processes at the touch of a button.

The Dutch pilot project was a great success, with both Royal HaskoningDHV and the customer “exceedingly happy” with the results. Given the positive reception, Royal HaskoningDHV used this as a springboard to broaden the scope and develop the iReport so as to enable clients to use it across all projects and segments, globally, across the business, says Legters.

By sharing this in-house knowledge throughout the company, the iReport was brought to South Africa in June last year, when the opportunity arose within the roads industry for the Vincent Tshabalala Pedestrian Bridge project.

The Royal HaskoningDHV South African branch tapped into this in-house knowledge and approached the JDA with the iReport offering.

Roods believes that JDA, as a forward-thinking organisation, is keen to embrace innovation. Coupled with the company’s strong relations with the JDA, “we had a firm foundation built on our partnership with JDA which helps to make this a first for South Africa”.

Given the successful execution with JDA, Roods is optimistic that this initiative will open up many more opportunities for the iReport in South Africa and beyond.