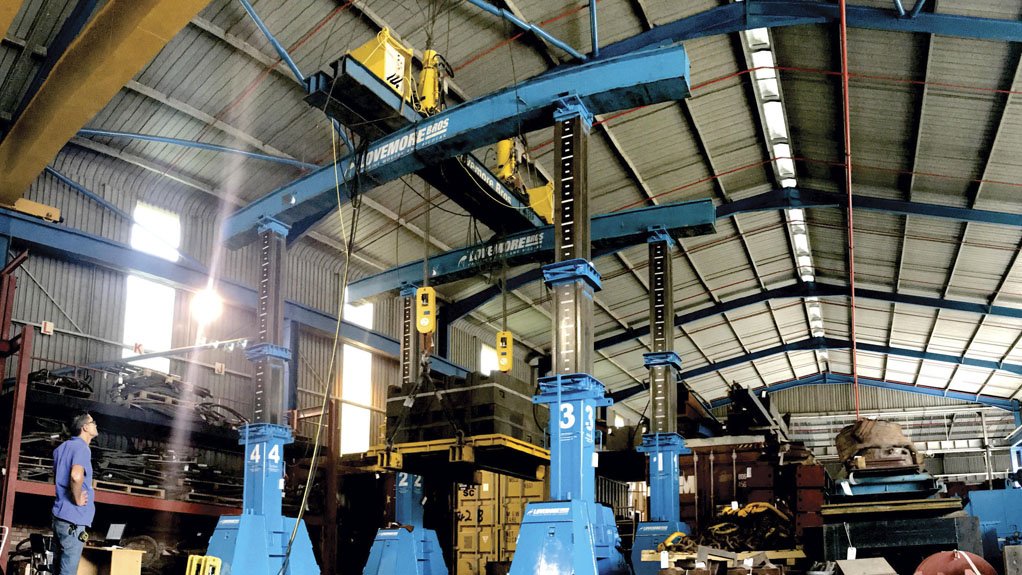 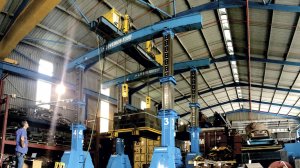 EFFECTIVE USE OF SPACE Strand jacks are particularly useful in operations with limited space available, such as in sugar mills, which are generally very congested

Machine moving and rigging specialist Lovemore Bros is adding four 70 t strand jacks to its service offering, providing an effective heavy-lifting alternative to conventional cranes for many industries, including the sugar industry.

Mobile cranes are generally positioned several metres away from the load and use a long boom with counter weights to lift the load, but strand jacks are positioned directly in line with the load, he adds.

“Mobile cranes are very costly to use – especially when it comes to heavy lifts – and strand jacks can often either replace the use of a mobile crane or allow for the use of a much smaller mobile crane, thus reducing the overall cost of the project. This can potentially lead to savings of millions of rands.”

Hawyes notes that strand jacks are particularly useful in operations with limited space available, such as in sugar mills, which are generally very congested. When combined with a hydraulic gantry or a self-erect tower, the strand jacks can potentially have many applications in a mill, assisting with the installation of turbines, generators, evaporators and juice heaters, for example.

“We are always looking for ways to work faster, smarter, safer and more cost effectively for clients – the strand jack provides us with another way to do this and we are looking forward to . . . implementing them in the sugar industry.”

Hawyes says using strand jacks further enables clients to have more flexibility when planning projects, such as designing a new plant or factory upgrades, as the machinery can be positioned in areas that are not accessible to mobile cranes. This is particularly relevant in Africa, where there are many areas where large mobile cranes are not readily available, and to establish one on-site would be very costly. Owing to its compact design, a strand jack can simply be packed into a container and sent to site at a much lower cost.

“The more the design boundaries get pushed, the more we need to push the rigging boundaries to achieve the goal. The strand jacks enable Lovemore Bros to cater to increasing construction design demands by offering synchronous control and 280 t of total load capacity.  This is an ideal solution for a range of construction and engineering purposes where the use of a conventional crane is either not economical or impractical.”

Operated from a laptop using custom-designed software and programmable logic controller systems, the strand jacks further offer key safety reassurances. Hawyes explains that the software allows for full control of the lifting and lowering operations and has built-in safety precautions to prevent any unsafe act.

In addition, the strand jacks have two sets of mechanical jaws that clamp onto the steel cable, or strand, during the rigging process. There is always at least one set of these jaws mechanically locked onto the cable at all times, ensuring that that the jaws cannot let go of the strand even if the hydraulic system or operating software were to fail.


Strand Jack Particulars
A strand jack can be considered a linear winch that uses a lifting technique that originates from the concrete post-tensioning principle, says Enerpac. In a strand jack, a bundle of steel cables or strands is guided through a hydraulic cylinder while anchor systems above and below the cylinder grip the strand bundle using wedges. By stroking the cylinder in and out while the grips are engaged in the anchors, a lifting or lowering movement is achieved.

The motion of the cylinders is driven by hydraulic power packs that can be electric- or diesel-powered. Enerpac’s sophisticated software program synchronises the motion of the strand jacks and adjusts the motion to the loads at the specific lifting point.

Enerpac strand jack systems are available from 30 t capacity up to 1 000 t capacity. The company also provides a full range of accessories, including a strand guide, strand dispenser and recoiler.