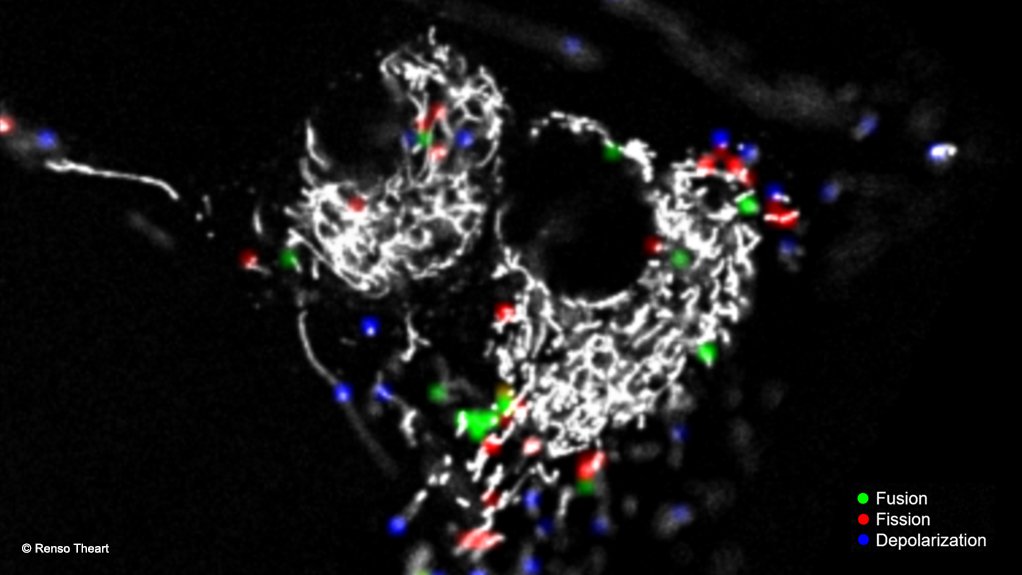 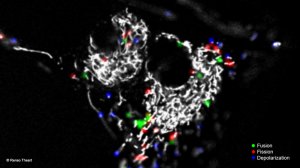 Photo by Rensu Theart
A processed MEL image of mitochondria, with the different events identified by different colours

Scientists and engineers at Stellenbosch University have developed a ‘visualisation tool’ that can, in three dimensions (3D) in space, as well as in time, automatically localise and quantify specific processes inside biological cells, such as those that make up the human body. The main focus for the new ‘tool’ is mitochondrial fission and fusion, hence its name – the Mitochondrial Event Localiser (MEL).

The Stellenbosch researchers who developed the tool are Dr Rensu Theart, Professor Ben Loos, Professor Thomas Niesler, Jurgen Kriel and André du Toit. The paper describing their results was published in the journal “Plos One”.

Mitochondria are a type of organelle. Organelles are specialised and discrete structures found in living cells. In addition to mitochondria, they include chloroplasts, lysosomes, ribosomes and the nucleus itself. As for mitochondria themselves, they are responsible for producing most of the chemical energy that powers a cell’s biochemical reactions.

“Mitochondria are highly dynamic organelles that do not operate in a stagnant or isolated manner,” explained the authors in their paper. “Rather, they function in a highly energetic and networked fashion, continuously subjected to rapid remodelling events referred to as fission (fragmentation) and fusion.”

A cell’s balance, functionality and viability is heavily dependent on these mitochondrial processes. When these malfunction, it is frequently an indicator that a neurodegenerative disease (for example, Parkinson’s or Alzheimer’s) has set in. But, until now, quantifying such cell dynamics has been difficult and most of the work has had to be done manually.

However, MEL is automated, using new software developed by Theart (as part of his PhD research). It uses three-dimensional confocal microscopy images of cells that have been labelled for mitochondria. (A confocal microscope uses laser light to illuminate a specific point at a pre-determined depth within a sample; the result is the emission of fluorescent light from exactly that point, while a pinhole system within the microscope’s optical pathway blocks out all out-of-focus imagery; a picture of the entire sample is created by having the microscope scan it. By repeating this process on several optical plans, a 3D image of the sample is created. Labelling means introducing fluorescent dyes into mitochondria, to make them easier to image.)

These images are collected in a time-lapse series, and the best two consecutive images selected and binarized (converted to just black-and-white pictures – no grey, for example), allowing the separate mitochondrial structures to be isolated. Mathematical processing, including a new algorithm that the Stellenbosch team has named ‘back-and-forth structure matching’, allows the determination of the existence and location of mitochondrial events. The locations of these events are then overlaid, in different colours, on the original image of the mitochondria. The process is repeated for all the pairs of consecutive images in the time lapse sequence. This allows the mitochondrial events to be quantitatively evaluated over time.

“We believe it moves the field forward on many fronts, from life sciences dealing with mitochondria and microscopy, to the fields of image analysis and object recognition, computation and machine learning, data handling and analysis, and 3D visualisation,” enthuses Loos. “With MEL, we are able to quantify the structures and the interaction (fission and fusion) between the structures in the cell, as well as pinpointing where these are occurring. This is incredibly exciting, to locate where in the cell fission, fusion and depolarisation occurs, and to quantitatively describe their magnitude of occurrence.”