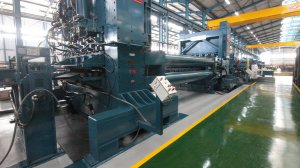 He tells Engineering News that the company has experienced improved trading conditions, despite the industry, in general, experiencing a significant margin crisis.

However, he notes that Allied Steelrode is in a more sustainable position, largely because the company has managed to trim costs, increase efficiencies and improve its stockholding.

Although encouraged by President Cyril Ramaphosa’s State of the Nation Address, Rippon is cautious of “the many promises which need to be implemented”, adding that “it remains to be seen whether the President will be able to implement – and enforce – the recommendations he put forward”.

The recommendations include stimulating the economy and bringing an end to the era of corruption. The steel industry is “extremely supportive” of these good intentions and looks forward to seeing them being brought to realisation, adds Rippon.

The load-shedding necessitated by the precarious state of the national power utility is another area of concern, adds Rippon. He emphasises that, while Allied Steelrode has contingency measures in place for eventualities such as this, it is not sustainable in the long term for the company, nor indeed for any in the sector.

He points out that Allied Steelrode has put its intentions into action by trimming overheads and increasing efficiencies. The company’s technology investment roadmap has culminated in the installation of its second stretcher leveller at its Midvaal-based facility.

“Investment in our two stretcher levellers and the development of our Allied Steelrode Stretcher Material (ASSM) brand are but two of the ways in which we have sought to mitigate the difficulties that the steel industry is facing.”

Further, the company has increased its revenue and improved its stockholding. Rippon explains that substantial investment in major stockholding has resulted in Allied Steelrode successfully differentiating itself from competitors, as the company can now provide stock far more readily and quicker. This has major benefits for the company’s customers, who often need steel products delivered promptly with short lead times, he highlights.

“We are feeling reasonably confident and are strategically well positioned, owing to our improved service and efficiencies, and major investment in advanced technology which produces products such as ASSM, which is in great demand by several industries including the fabrication and automotive sectors,” he concludes.