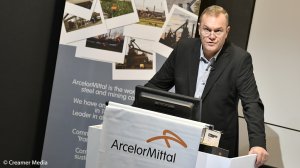 AMSA CEO Kobus Verster on the threat posed by power hikes and on the group's plan to approach the regulator for relief. Camera Work & Editing: Darlene Creamer. Recorded: 7.2.2019

Steel producer ArcelorMittal South Africa (AMSA) says it will submit site-specific applications to the National Energy Regulator of South Africa (Nersa) to secure tariff relief from Eskom for its operations in Gauteng, KwaZulu-Natal and the Western Cape.

The submissions will be made in line with the framework for negotiated pricing agreements (NPAs) that is now said to be in place and AMSA anticipates that a determination could be made within three months of the applications being made.

Nersa has already approved a two-year NPA between Eskom and Silicon Smelters to facilitate the restart of ferrosilicon production in the Limpopo and Mpumalanga provinces. The utility also used recent public hearings into its latest revenue application to stress its willingness to enter into specific arrangements with those sectors and businesses whose operations could be threatened by further tariff increases.

Eskom is requesting allowable revenue of R219-billion for 2019/20, R252-billion for 2020/21 and R291-billion for 2021/22, which, if granted, would translate to tariff increases of 17.1%, 15.4% and 15.5% for the three years included in the fourth multiyear price determination period. These hikes do not include the 4.41% Regulatory Clearing Account (RCA) increase already scheduled for introduction from April 1 and which will be sustained in the tariff base for four years. Nor do they accommodate any additional claw-back that could arise from Nersa’s evaluation of a further RCA application for the 2017/18 financial year.

He told analysts on Thursday that, even before any additional hikes that could be instituted from April 1, South Africa’s power costs placed AMSA at a 30% competitive disadvantage relative to steel producers in other jurisdictions.

AMSA reported its first full-year profit in eight years in 2018, having leaned heavily on both shareholders and government in recent times to sustain its going-concern status. The ArcelorMittal Group underwrote AMSA’s R4.5-billion rights issue in 2016, while government introduced tariffs on several flat and long steel products to fend off rising imports, mostly from China.

Verster said he was concerned about the impact further electricity hikes could have on the group’s financial, operational and expansion plans and reported that, in parallel to seeking NPAs, it was also working on ways to reduce consumption where feasible.

Without providing details as to the nature of the relief being sought, Verster said AMSA would apply for “certain benefits” in terms of the framework provided by the regulator.

He also indicated that the applications would be linked to increases in capacity, which was also aligned with AMSA’s internal goal of increasing output by stabilising production at levels higher than the 84% capacity utilisation achieved during 2018.

In January, AMSA reopened its electric arc furnace (EAF) in Vereeniging as part of am initiative designed to reduce production complexity at its long-product mill in Newcastle, in KwaZulu-Natal. Furnace production was currently being restricted to off-peak periods, owing to the electricity-intensive nature of the process.

“We would like to produce more, but … we are running only two shifts outside of peak hours to manage our consumption. As soon as we have a different dispensation for that we can increase production.”

The group was also continuing to study the economics of a new 500 000 t/y to one-million-tonne-a-year EAF at Vanderbijlpark, but Verster said an investment decision was unlikely in the absence of certainty about the price path for electricity in South Africa.

“The increases [in tariffs] as envisaged currently for the coming three years will have a massive negative impact not only on us, but on all other downstream manufacturers and especially the arc-furnace producers,” Verster stated.