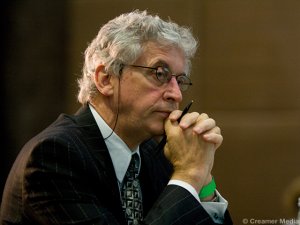 In a scathing criticism of management practises employed by the State in the running of national carrier South African Airways (SAA), Free Market Foundation executive director Leon Louw has accused it of acting illegally through the provision of regular bailouts in an effort to keep the beleaguered national airline afloat.

These comments followed an announcement by Public Enterprises Minister Malusi Gigaba last week that he had removed acting SAA CEO Vuyisile Kona from the board of the airline following allegations involving the breach of the Public Finance Management Act.

“SAA is, and has always been, an organisation founded in bad faith and the bailouts awarded by the State – which now amount to over R12-billion – are unlawful,” Louw told a media briefing on Wednesday.

The two-time Nobel Peace Prize nominee based his argument on the Domestic Air Transport Policy from 1990 – still in effect, as it was adopted in accordance with the Constitution – that required the national carrier to operate on a commercial basis as an autonomous entity that would not be allowed to enjoy privileges as a result of being a government entity.

The policy further stipulated that “government could not guarantee new loans to SAA or any other airline with government interests while private airlines have to borrow at their own risk."

He added that government not only supported SAA in the form of bailouts and guarantees, but also through government-funded tickets and an acknowledgment of it as a preferred carrier, which violated policy dictating equal opportunity in the market.

“Despite government continuing with a rhetoric that SAA is independent and on its own, it continuously bails it out. While it is possible to have a successful and equal State-owned company, this can only be achieved if it is not insolvent-proof, which is not the case with SAA,” he noted.

Efficient Group chief economist Dawie Roodt agreed, adding that the airline was, essentially, not a business at all.

“Most of South Africa’s State-owned companies, including SAA, are not run as companies, but rather as subdivisions of government departments or bureaucracies. Because the airline is also used to subsidise another inefficient State-owned company, Airports Company South Africa, as well as perform other functions, it is essentially a civil service,” he claimed.

Moreover, the fact that the carrier continuously required bailouts to enable it to pay its debts meant that it was bankrupt, he said.

Meanwhile, Louw emphasised that, each time the airline received a bailout from government – which he described as “duplicitous”, it assured it would be the last, which had not been the case.

He further believed it was impossible for State-owned enterprises to compete on a level, free market playing field because incentives for the public sector differed so dramatically from that of private sector entities.

“We must remember that once government has bailed out the carrier using taxpayer contributions, it does not impose additional taxes to recover these amounts. Instead, it diverts money from existing budgetary allocations,” he noted, adding that most of these were intended to provide services for the poor, such as housing, education and improved policing.

In this way, Louw believed the poor were ultimately subsidising the privileges of the rich.

“Essentially, it is a policy of welfare for the wealthy,” he said.

He suggested that the carrier be used as a vehicle for the real implementation of black economic-empowerment and affirmative action objectives, rather than as what he believed to be “an instrument of nepotism and patronage”.