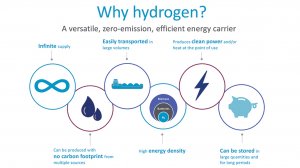 Clean hydrogen is enjoying unprecedented political and business momentum, with the number of policies and projects around the world expanding rapidly, says the International Energy Agency (IEA), which adds that now is the time for potential green hydrogen providers to scale up technologies and bring down costs to allow hydrogen to become more widely used.

Japan’s required price level of ¥30/m3 of hydrogen translates into about $3/kg, which can be achieved by South Africa, and now Europe is also showing interest.

The Deutsche Gesellschaft für Internationale Zusammenarbeit GmbH or GIZ is planning a project involving South Africa, Morocco and Argentina on the possibility of developing renewable energy generated decarbonised fuel – Power-to-X – for export to Europe as well as for the developing as a local economy.

The Port of Rotterdam, as an energy hub and gateway port for Europe, is looking to its first hydrogen import terminals and corridors being ready for demand in 2023 to 2026 and further.

On the website of the Port of Rotterdam Authority, CEO Allard Castelein describes hydrogen as the energy of the twenty-first century: “With hydrogen, we ensure that the Port of  Rotterdam remains an important pillar of the Dutch economy.”

Following Dutch Shell announcing plans to take a green hydrogen plant into operation as early as 2023, the hydrogen economy is quickly gathering momentum. This plant will be constructed at Maasvlakte 2, a major civil engineering project in the Netherlands.

From there, the produced hydrogen will be transported through a pipeline to Shell’s refinery in Pernis, a Rotterdam submunicipality. Natural gas infrastructure and transportation company operating in the Netherlands and Germany Gasunie and the Port of Rotterdam Authority intend to construct the new pipeline in a joint venture.

The programme is aligned to the European Green Deal and signatories called on the European Commission to make the right choices for Europe’s upcoming energy system integration and hydrogen strategy, harvesting the full potential of renewable electricity to fully decarbonise Europe’s power system.

The initiative urges that, amidst the Covid health crisis and its economic implications, Europe prioritises the most efficient, sustainable, and cost-effective pathways to decarbonise its economy.

It said in a release to Mining Weekly that direct electrification would be the primary means for decarbonising heating and road transport, but that there were other, hard-to-abate sectors – such as, chemicals, heavy industry, long-haul road transport, aviation, and shipping – where direct electrification was insufficient and where renewable hydrogen could play a key role as the most cost-effective and sustainable solution for full decarbonisation.

Hydrogen produced in Europe by electrolysers powered by 100% renewable electricity, such as solar and wind, had, the release stated, zero greenhouse gas emissions.

Clean hydrogen is a much-discussed topic in the EU green recovery and net-zero plans. The EU’s upcoming green recovery plans are set to be announced on May 27, and Reuters has reported this might feature clean hydrogen high on the investment agenda.

WindEurope CEO Giles Dickson pointed out that wind energy would be key: “The EU Commission and IEA say wind will be half of Europe’s electricity by 2050. But we cannot electrify everything. Some industrial processes and heavy transport will have to run on gas, and renewable hydrogen is the best gas. It’s completely clean. It’ll be affordable with renewables being so cheap now, and it’ll be energy made in Europe creating jobs and growth in Europe. Hydrogen in the recovery package? Yes, but make it renewable hydrogen,” he said.

While hydrogen would be produced by Europe, it is being acknowledged that import would still be necessary, which is where South Africa would come in.

IEA states that hydrogen and hydrogen-based fuels can transport energy from renewables over long distances, from regions with abundant solar and wind resources, such as South Africa, to energy-hungry cities thousands of kilometres away.

South Africa’s superior sunlight, prime wind, abundant land, platinum group metals for fuel cells and certain electrolysers, and a renewables port at Coega in the Eastern Cape are being acknowledged.

European Commission President Ursula von der Leyen has unveiled a draft law that commits the region to climate-neutrality as part of the far-reaching Green Deal strategy that foresees decarbonisation of the European economy over the next three decades.

IEA singles out hydrogen as promising to be a lowest-cost option for storing electricity over days, weeks or even months.

Council for Scientific and Industrial Research (CSIR) senior research engineer Thomas Roos confirmed that South Africa’s CSIR recently attended the first meeting of the African Hydrogen Partnership in Ethiopia, where the development of green hydrogen on the continent was discussed, both for own use and for export to Europe and Japan.

The publication Hydrogen View reported last week that seven hydrogen fuel cell units were set for deployment at South Africa’s 1 Military Hospital in Pretoria to help the fight against the coronavirus.

The project, reportedly announced by the Department of Science and Innovation (DSI), in partnership with the Department of Defence and Department of Public Works and Infrastructure, was said to be taking place through a partnership between the government and private sector, made up of Bambili Energy Group, Singapore-based Horizon, US-based Element One and Powercell Sweden.

Following the deployment of the fuel cells at the site, a hands-on training programme would provide users with the skills needed to operate and manage the systems, the report stated.

According to the DSI, containerised hydrogen fuel cells have the potential to help because of the speed of their ability to provide clean power to temporary facilities.

IEA states that hydrogen and energy have a long shared history – powering the first internal combustion engines over 200 years ago to becoming an integral part of the modern refining industry.

Hydrogen, IEA adds, is light, storable, energy-dense, and produces no direct emissions or pollutants. But for hydrogen to make a significant contribution to clean energy transitions, it needs to be adopted in sectors where it is almost completely absent, such as transport, buildings and power generation.

HySA's two other hubs are HySA Systems, at the University of the Western Cape, and HySA Catalysis, which is shared between the University of Cape Town and the State-owned minerals research organisation Mintek, based in Randburg.

The HySA programme falls under the DSI, which provides funding and direction. The specific mandate of HySA Infrastructure centres on hydrogen generation, storage, transport and codes and standards.

The successful study to determine the costs to transport hydrogen by land and sea, including shipping to Japan, was carried out under the auspices of HySA Infrastructure.

Bessabarov has stated that technologies under consideration for the transportation of the hydrogen include the possible use of hydrogen carriers such as methanol, ammonia, other types of liquid organic hydrogen carrier technology, known as LOHC technology, or even cryogenically liquefied hydrogen.