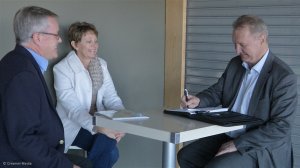 JOHANNESBURG (miningweekly.com) – The recently published South African Code for the Reporting of Oil and Gas (Samog) is fully aligned to the oil and gas reporting standards used globally.

Ensuring that all oil and gas companies list according to the same reporting standards no matter the stock exchange, the code is based on the Canadian oil and gas reporting code – National Instrument 51-101 – in respect of general disclosure.

While the South African government’s newly promulgated oil and gas regulations focus largely on the technical and engineering aspects of oil and gas well drilling, the code formalises the standard of reporting on the size of oil and gas fields and reservoirs, as well as items that must be disclosed in public reports.

Like Canada, the South African Oil and Gas Committee has insisted that, when reporting oil and gas findings, companies must publish proven reserves – known as P1 in which there is a 90% certainty of production occurring – and probable reserves – P2 in which there is 50% confidence that the oil or gas being referred to will be extracted economically – in the same way as mining companies are obliged to report on measured and indicated resources, in accordance with Samrec and Samval.

Listed South African and Canadian companies will thus differ from companies listed in the US, where the Securities and Exchange Commission has laid down that only P1 – the highest level of confidence – may be disclosed.

“Canada and ourselves have opted disclose P1 and P2 because that gives the investor the opportunity to assess the value of the project,” said Venmyn Deloitte MD Clay.

Unlike Samrec and Samval, Samog combines oil and gas reserves, resources and their US dollar valuations, on a standard form that it is compulsory to complete.

When the committee set out to construct the Samog code four years ago, it decided to adopt in principle the National Instrument 51-101 code, which is effectively administered by the Alberta Securities Commission of Canada.

On the local front, the JSE was an important contributor, which resulted in the National Instrument 51-101 being modified to take into account local JSE considerations and Pasa being included as part of a broad industry consultation process.

De Bruyn outlined how oil and gas companies applying to list on the JSE would now be required to compile a qualified reserves evaluation report, which would enter a scrutinisation process prior to being put into the public domain.

The Alberta Securities Exchange has also agreed to advise the JSE should approval issues arise.

The steps that have been taken ensure that all oil and gas companies, whether listed in Johannesburg, London, Calgary or Toronto, list according to the same reporting code.

“Once the report is published, it will be to international standard,” De Bruyn assurred Mining Weekly Online.

Amendments to Section 12 of the JSE’s listings requirements, which were introduced at the same time as the exchange adopted the globally aligned oil and gas reporting standard, became effective on March 10, following the publishing in the Government Gazette of Board Notice 38 of 2015.