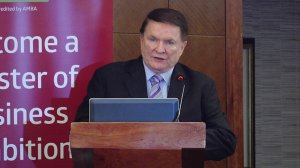 South Africa’s first-ever Policy Uncertainty Index (PUI) has been launched, with the inaugural publication showing a “spike” in uncertainty during the fourth quarter of 2015 – a period during which President Jacob Zuma removed the well-regarded Nhlanhla Nene as Finance Minister.

The index, which will be published quarterly, has been created by North-West University School of Business and Governance and was unveiled in Johannesburg on Monday by well-known economist Professor Raymond Parsons.

The PUI is being assembled using three components, including: an analysis of news on policy uncertainty from 20 leading South African publications; a quarterly survey of 25 economists; and answers given by manufacturers surveyed for the University of Stellenbosch’s Purchasing Managers Index (PMI) on prevailing political or policy constraints.

The PUI for the quarter, which uses 50 as a base, with any rise above 50 indicating an increase in uncertainty, showed a rise to 55.4 points when compared with the third quarter, which was used as the base quarter. The political/policy component of the PMI declined to its worst level since 1993 during the same period.

Parsons attributed the rise primarily to the removal of Nene and the uncertainty that action had created for the 2016 Budget balance, relative to the narrative contained in the Medium-Term Budget Policy Statement of October.

Replacing Nene with the little-known David ‘Des’ van Rooyen (who was subsequently replaced, following a negative market reaction, by the experienced Pravin Gordhan) had raised serious questions about the priority South Africa would give to ensuring that its credit rating was not downgraded to junk status during 2016.

The rise in the PUI was also underpinned by the deterioration in the global economic outlook, as well as by several domestic regulatory and legislative changes during the period, Parsons explained.

He stressed, though, that it was pure coincidence that the PUI had been launched during such a volatile period, explaining that work had been under way for some time to create a South African version of indexes that exists in at least ten other countries, including the US, China, India and the UK.

The domestic derivative would seek to empirically measure a factor that had consistently been cited as a reason for weak investment, business and consumer confidence, as well as job creation.

“We believe it is an index whose time has arrived,” Parsons enthused, while acknowledging that certainty is not necessarily “a cure for all economic ills”.

Indeed, a number of questions were raised regarding the value of policy certainty in itself when an underlying policy might be harmful to the business climate and the economy.

Parsons countered by arguing that uncertainty had proved to be a serious economic inhibitor and that even a weak policy that was certain was preferable to open-ended uncertainty.

Further questions were also asked about whether the third quarter was an appropriate base, owing to the fact that policy uncertainty was already relatively high at that stage in South Africa’s political-economic cycle.

Index compiler Professor Waldo Krugell concurred and stressed that it had been difficult to choose the “right quarter” on which to base the PUI and that the current value lay in the associated narrative, which indicates that confidence is low and uncertainty is high.

“Obviously, you have to be really careful to interpret the numbers where you only have two data points . . . but our five points [above the base of 50] looks to be a significant variation,” Krugell said.

Parsons stressed, though, that “what can be measured, can be managed” and that there was potential for South Africa to use the upcoming State of the Nation and Budget addresses to reduce uncertainty.

Zuma’s post-Davos statement emphasised the country's commitment to “maintaining policy certainty”, while Gordhan had taken several actions in recent weeks to demonstrate that government had made avoiding a downgrade a key priority.

“Just as an index can go up, it can come down . . . it depends what choices we make, what decisions we make and what we implement,” Parsons concluded, adding that 2016 should be about turning around the current negative perceptions about South Africa by reducing policy uncertainty.