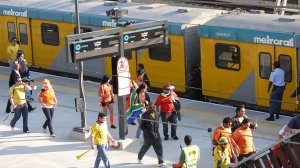 South Africa has a “completely dysfunctional" passenger rail system, says Professor Stephan Krygsman of the University of Stellenbosch’s Department of Logistics (Transport Economics). “There is no way to sugarcoat it.

“The fact that we cannot get a rail system working in this country is probably our biggest [transport] problem. If we can solve that, we can solve a lot of problems.”

Economist Mike Schussler notes that 55-million people used the train system a month in South Africa in 2009. Even with the addition of the Gautrain in 2010, this has now dropped to 20-million people a month.

He says there are various reasons for this, including crime and arson.

Buses have picked up around two- to three-million of the passengers who have departed the rail system.

The options available to the rest include walking, cycling, taking a minibus taxi or buying a car – adding to congestion on the road.

“The reason we buy more cars and see more taxis on the highways is because public transport on the rail side just ain’t working. And because we can’t fix rail quickly enough, we need to invest more in roads,” notes Schussler.

When leaving Metrorail, people are forced to use taxis at five time the cost of a train ticket, he adds.

Krygsman agrees that the poor are carrying the burden for the failure of the rail system.

“And, if they go to buses, they get stuck in traffic. Buses can only move to work and back once a day.”

ROAD FUNDING MODEL
The conundrum is that South Africa has very little funding for new roads.

Department of Transport road infrastructure and industry development acting chief director Whity Maphakela says government “has no money to finance roads. We don’t have money to build new roads across all three spheres of government”.

He says the current backlog in looking after the current road network – “not even building new roads” – is R197-billion.

He adds that government still supports the user-pays principle as one road funding mechanism, despite a number of high-ranking politicians having publicly voiced their opposition to one of the most visible iterations of this – urban tolling.

To date, electronic tolls (e-tolls) have been a spectacular failure on the Gauteng open-road toll network.

“I think government needs to be clear around policy and enforcement,” he notes.

“One problem we experience around the [system] is enforcement.

“It is important for government to make sure there is a robust system behind it, to make sure you can enforce [e-tolls]; that you are able to hold people accountable. When we create this environment, then people will start complying.”

Vermaak adds that South Africans have developed a culture of noncompliance.

“We, as South Africans, have become noncompliant people. We bent the rules. It starts with each of us not stopping at the robot when we leave for the airport at 05:00. Our excuse is that we say it is not safe.

“The reality is that our behaviour as a society creates an environment where we do not comply with rules and regulations.”

Failure to pay e-tolls has seen the price tag of the first phase of the Gauteng Freeway Improvement Project – which was to be funded through urban tolling – balloon from R22-billion to R44.5-billion.

“We need people to comply. We desperately need to start the next phase [of road construction],” says Vermaak. “Gauteng is responsible for 40% of South Africa’s gross domestic product. What happens if the province just grinds to a halt?”

* Schussler, Krygsman, Maphakela and Vermaak spoke at a Transport Forum event held in Pretoria this week.