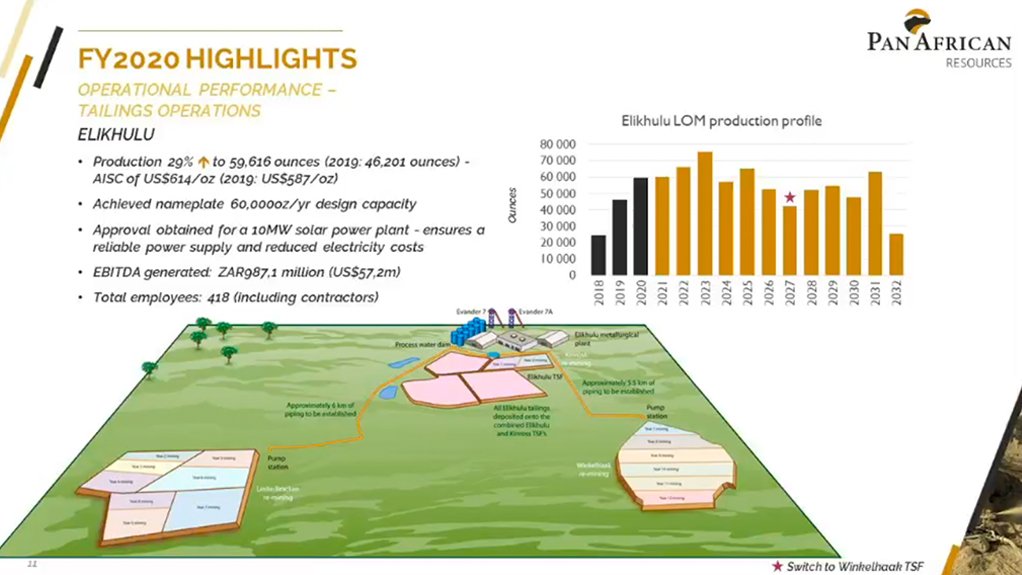 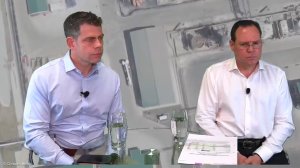 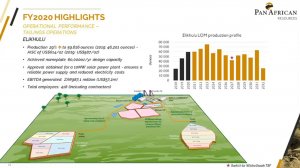 JOHANNESBURG (miningweekly.com) – The 10 MW solar electricity plant that Pan African Resources will construct on site at its Elikhulu gold-from-tailings plant next year at a cost of R150-million will take care of most of Elikhulu’s daytime power requirements.

This is the first phase of solar power generation at Evander. Pan African will be looking to expand this power facility to a possible 25 MVA for the upcoming Evander’s Egoli underground gold mine project. A similar solar plant is also being considered at Barberton. (Also watch attached Creamer Media video.)

Payback on the Egoli project under way is estimated at less than five years from inception of construction, with funding provided on a nondilutive basis by a dedicated debt facility.

The amazing Elikhulu operation at Evander generated almost R1-billion of earnings before interest, taxes, depreciation and amortisation (Ebitda) in the last year, at a much lower gold price than the prevailing spot price.

Remarkably, Elikhulu, Zulu for ‘The Big One’, produced 29% more ounces at, wait for it, the extremely low all-in sustaining cost of just over $600/oz.

Elikhulu at one stage had its naysayers, but Pan African’s firm belief in its efficacy turned the naysayers into yaysayers – and the stakeholder applause is intensifying.

Mining Weekly can report that Elikhulu has access to 178.7-million tonnes of tailings that have accumulated over Evander’s seventy-year gold mining history and it is playing a positive environmental role by catalysing the removal from dump sites of legacy mine waste and freeing the land beneath the waste for new development.

The Evander tailings storage facilities (TSFs) being reclaimed are the Kinross, Leslie-Bracken and Winkelhaak TSFs, in that order. Once processed, these TSFs will be consolidated into one, shrinking Evander Mines’ environmental footprint substantially. The average gold content of the material being processed is 0.3 g/t, ranging from 0.28 g/t to 0.33 g/t.

In the next two years, Elikhulu’s tailings footprint  – which yielded 59 626 oz in the period – will be enlarged and a move made to the Leslie/Bracken tailings facility, Pan African Resources CEO Cobus Loots said at the company’s presentation of superlative results for the 12 months to June 30.

The capital required for these initiatives is R300-million split over the two years. Once this move is complete, the capital will again drop to a very limited number.

The London-, Johannesburg- and New York-listed midtier gold mining company’s 2020 financial year was a year of  highpoints at the safety, financial and operational levels.

On the safety front, Elikhulu went for 11 months without recording a single lost-time injury and for the first time in its history, Barberton Mines achieved three-million fatality-free shifts, with  two-million at the Fairview mine.

“ESG, or environmental, social and governance, is really part of our DNA. In the past, we’ve probably not articulated this focus and our achievements sufficiently. This has to change and we have to do even more,” said Loots.

The Pan African board has approved a major agriculture project in Barberton utilising very fertile but currently fallow mine land. This initiative has the potential of creating more than 400 permanent jobs.

Pan African’s mine closure costs are fully funded and during the year ongoing rehabilitation initiatives were increased, which included the final closure of Evander’s  5 Shaft and 9 Shaft.

It was subject to a number of independent audits and reviews, including on its tailings facilities and its carbon emissions.

Loots expressed pride in the volume of work being done with regards to schools and clinics in the Barberton area.

Pan African FD Deon Louw summarised the company’s 26% increase in turnover, resulting from a combination of a 1% increase in gold sold and a substantial 24%  increase in the dollar gold price and a 37% increase in rand terms, following a year-on-year depreciation in the rand:dollar exchange rate.

Although earnings increased year-on-year by 17%, the 2019 comparative financial results show that earnings actually increased by 93% if an impairment reversal that is included is eliminated, as is reflected in the company’s headline earnings.

“Under these circumstances, this is a more appropriate indicator of the relative performance,” Louw said.

Both in dollar and rand terms, all-in sustaining cost was adversely impacted by the Covid-related production losses and the inclusion of realised hedge losses.

The board has proposed a record final dividend of R 312.9-million or $18.7-million, subject to approval by shareholders at the annual general meeting.