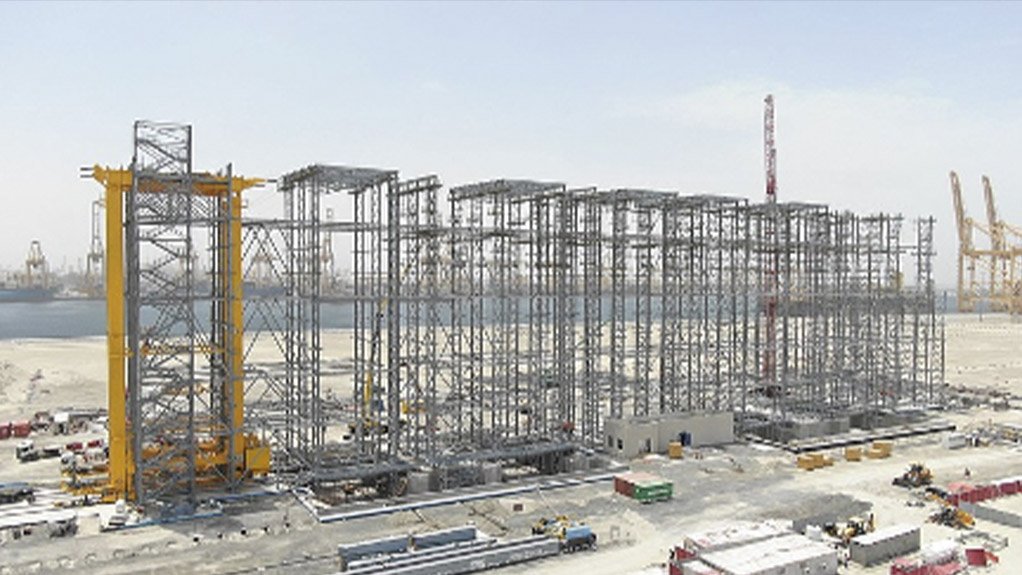 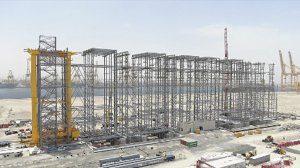 BOXBAY: FROM COIL LOGISTICS TO HIGH-BAY STORAGE TECHNOLOGY FOR CONTAINERS

SMS group is a global, leading partner for the metal industry. As a family-owned business headquartered in Germany, quality and innovation are in our DNA. We are committed to the success of our customers and strive to add value along the entire value chain of the global metal industry.

A huge high-bay storage system is currently being built in Dubai. What is special about this is that, instead of small boxes or individual products, entire shipping containers are going to be stored in it, eleven stories high. Up to now, these massive containers have simply been stacked on top of each other in container ports – up to six high – when the cargo is discharged. The problem is that the containers then need to be reshuffled. So sufficient space has to be reserved for this. Reshuffling accounts for between 30 and 60 percent of all container movements. A technology that was originally developed for fully automated processes in the field of steel product logistics is set to change this, giving port operators even more flexibility.

Seaports are pushing against their limits

Which is urgently needed. While a terminal is being built more or less on a greenfield site in Dubai, the pressure faced particularly by existing port facilities and owners is growing. “Most major seaports have grown historically and are situated next to port cities,” says Mathias Dobner, CEO of BOXBAY. He explains that “their topology restricts how far these ports can be expanded. On top of that, environmental regulations are getting stricter and stricter – especially when it comes to land reclamation.” BOXBAY plans to create future opportunities here with its new solution. The concept is scalable and, from the very first module, can create additional capacity.

BOXBAY is a joint venture between DP World in Dubai, one of the world's largest container port operators, and SMS group. By pooling their expertise, BOXBAY intends to create a fully automated container terminal, based on high-bay storage systems, that is modular in design so it can be extended, and that provides a fast return on investment for its owners.

From coil logistics to high-bay storage technology for containers

This concept is built around a technology that AMOVA, an SMS group company, originally developed for steel plant logistics. For decades now, the company has been storing up to 50-ton coils in automated high-bay stores. These high-bay storage systems (HBS) are used to store up to 4,288 coils, sometimes still in warm condition.

Up to now, containers in ports were just piled on top of each other using either manual or automatic stacker cranes. Due to a lack of space, many ports have to stack up to six boxes on top of one another. The higher you stack, the more difficult it is to access a specific container. So, when the goods are picked up by truck, several containers first have to be reshuffled until the desired container can be freely accessed, then lifted up and off the pile and loaded on to the truck. That is why some container terminals are non-productive for up to 65 percent of all container movements. The technical term for this unwanted procedure is "shuffling". A major advantage of the BOXBAY high-bay storage system is not just the fact that more than three times as many containers can be accommodated on the same floor space by comparison with conventional systems, but also that every container is directly accessible. This does away with shuffling completely, which is neither productive nor paid for by the customer, of course. This is what makes the system faster than the comparable systems normally used.

As before, huge gantry cranes, also known as container cranes, are used to discharge the cargo from the container ships. Manned or unmanned vehicles then transport the containers to the high-bay store. These vehicles can include straddle carriers, terminal trucks, or driverless handling systems.

High-bay storage operating units, or stacker cranes as they are known, take over the handling of the containers at the pick-up points of the BOXBAY system. The stacker crane docks itself from above onto the four corners of the container. This is where the customary, standardized corner castings are used to lock the container in place. For this purpose, the length of the grippers is automatically adjusted, as both 20-foot containers (1 TEU) and 40-foot containers (2 TEU) are transshipped. The storage and retrieval systems already underwent extensive tests in the production stage during the ongoing construction of the high-bay store in Dubai.

When the high-bay storage system for containers is complete, the process will look like this: Once the cargo has been successfully picked up, it is transported through the aisles to an available rack storage space on one of the eleven stories. While the container is being transported along the storage aisle, it is simultaneously raised to the level of the shelf. This saves time. The stacker cranes have telescopic arms that can reach the racks on both sides of the aisle. In contrast to conventional high-bay stores, the shelves here do not have continuous bottoms, as the containers are self-supporting and can be positioned on short brackets that are attached to the supports. This reduces the material volume and thus the weight of the racking systems, meaning lower costs for the storage rack structure and its foundation.

The system's control unit is responsible for choosing the storage space. This ensures, for example, that heavy containers are stored at lower levels and light containers on upper levels - just like the loading system used for container ships. In terms of the programming for the whole store control system, the developers opted for the warehouse management and tracking system that has long since been used for coil logistics, so they only had to make some adjustments to meet the new requirements. As with the storage of steel and aluminium coils, all positions and movements during operation can be tracked.

The containers are removed and transshipped based on procedures and technologies that have already been tried and tested in the field of coil logistics. Located in the basement, below storage aisle floor level, is an automatic conveyor system that runs independently of the storage and retrieval operations in the high-bay store. The containers are passed down by the stacker cranes and deposited on moving pallets.

These autonomous, self-driven transport units move the containers quickly and energy-efficiently to the transfer area outside the high-bay store, where they are picked up by standard, fully automatic container cranes and loaded onto trucks or trains. The underfloor pallet circulation system and the connected truck loading and unloading station work entirely in parallel with the storage and retrieval system, and independently perform tasks that still have to be completed by warehouse cranes in standard automatic container terminals. This in turn saves time.

What's more, transfer positions can be connected on all four sides of the storage system. This full decoupling of the material flows is what gives the system its high degree of flexibility and ensures previously unattainable throughput levels per storage surface area. With a storage system that is 700 meters long and has 50 stacker cranes, over 500 water-side and 300 land-side container movements can be completed every hour.

For the world's major ports, in particular, these could well be important parameters. After all, cargo ships are getting bigger and bigger. At the turn of the millennium, conventional container ships were designed for around 8,000 twenty-foot containers, or 8,000 TEU. Nowadays, the biggest ships have capacities of up to around 24,000 TEU. The discharge and stowage of cargo in the ports can take several days. Every hour saved translates into cash for the shipping companies and port operators and shortens goods delivery times.