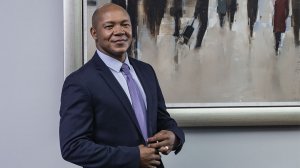 KwaZulu-Natal-based premium gas supplier SLG rose from humble beginnings as a black economic empowerment partnership with Sasol. The company is now a wholly black-owned and -managed company, and the second-largest trader of natural gas to industrial customers, and the largest compressed natural gas supplier in Southern Africa.

“SLG started with a small complement of 18 industrial customers, but currently boasts over 50 customers in KwaZulu-Natal and Gauteng,” says SLG CEO Mzi Tyhokolo.

Tyhokolo says SLG’s valued relationships with its customers and supplier separates the company from other energy companies.

“We have formed a culture of being customer-centric on the basis of these relationships, and it is this that sets us apart in this industry,” he explains.

The customer-centric focus has served the company well in that it has resulted in customer loyalty, as well as an environment in which a group of consummate professionals can offer their expertise drawn from their combined 110 years of industry experience.

SLG offers its customers a cleaner,  environmentally friendly and cost-efficient energy alternative to conventional forms of energy such as coal, heavy fuel oil, illuminating paraffin, liquified petroleum gas, and electricity. But it is the value-added service offering that truly sets it apart, says Tyhokolo.

SLG offers additional value – beyond supplying gas ­– for customers, as it is continuously engaging them in better and safer ways of using gas to improve their overall energy efficiency and wellbeing.

“No customer of ours should be burning more gas than what is absolutely necessary, which is good for business and good for the environment, while it also eliminates wastage and opportunity costs,” notes Tyhokolo.

Further, SLG also offers a complimentary [OA1] advisory service, which plays an important role in offering tailored technical services. This service assists customers in choosing the most suitable equipment for their particular needs.

The company also ensures that it is consistently up to date regarding the changing regulatory framework and laws to advise customers of these changes and how it affects their businesses.

“Beyond trading and supplying gas, we also assist our customers in responding to the obligations these laws and regulations place on their businesses, making SLG a one-stop-shop for all things natural gas,” he explains.

Tyhokolo reiterates how the energy crisis has put energy under the spotlight, which inadvertently puts gas at the forefront of these discussions.

“As any good engineer will note, you never let a good crisis go to waste, and this particular crisis has provided several opportunities for the energy sector to advance the concept of ‘South Africa Incorporated’ through cleaner energies, such as gas,” he says.

The energy industry faces with a variety of opportunities that can be exploited, but it must be considered in the context of producing electricity. South Africa’s electricity is mainly produced from coal, but this is an undesirable energy source.

“Gas, however, provides a favourable transitional energy source that could find itself replacing the current primary generation source and becoming the stepping stone to the cleaner, renewable-energy sources such as solar and wind.

“That is not to say that gas would be used only for a period, and then it is no longer required, but rather that it will continue to remain relevant even as renewable sources become mainstream, since there are limitations on the use of renewable energy.”

Tyhokolo adds, however, that the biggest challenge remains the source of the gas.

South Africa has a restricted supply of natural gas, relying wholly on the gas imported by Sasol from Mozambique, supply that has now reached a plateau.

It is, therefore, necessary to look at new sources of gas, which includes liquified natural gas (LNG). This provides SLG with an opportunity to be involved not only as a downstream gas trader but also in the mechanisms of bringing gas into South Africa.

While opportunities abound everywhere, Tyhokolo says this is severely limited, owing to the lack of gas availability in South Africa.

However, SLG plans on focusing on geographical expansions. The company currently operates from KwaZulu-Natal and Gauteng and, despite having been in existence in Gauteng since 2002, it has been active in the province only since 2017.

He notes that 30% of the volume of gas that the company sells is in Gauteng, which has shown phenomenal growth.

“We want to replicate that around the country, so our next target is the Western Cape, which has a strong industrial base,” he announces.

Ultimately, SLG aims to have a national footprint and increase its value chain through vertical integration as a gas explorer and supplier.

“Once we have access to larger volumes of gas, other opportunities open up to add value, such as by being a power producer rather than just a gas supplier,” says Tyhokolo.

SLG aims to become an integrated energy company, which not only provides gas as an end-product for customers but is also a power producer and an aggregator of gas for the South African energy market.